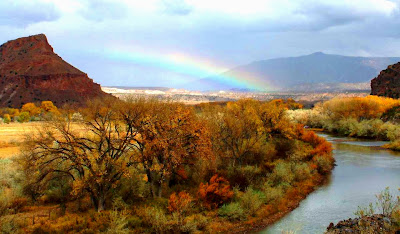 It’s winter and I’m driving with the window rolled down, the cold air trying to crawl under layers of wool, fleece and thermal.

I’m acclimating, preparing for an afternoon fishing the Chama River below the dam at Abiquiu, New Mexico. It’s one of those beautiful days with plenty of bright sunshine, just a slight hint of breeze and the promise of a warm afternoon.

It’s that quiet time of the morning when everybody has gone to work and the highway is empty. Just north of Espanola I see the first dead dog, crumpled up on the shoulder, a spray of darkness on the pavement marking the impact.

There’s somebody’s dog that won’t be waiting in the driveway tonight.

I pass a blackened, burnt out home that’s been there for years. Its rusty tin roof has collapsed into a gaping black hole where the living room might have been. Undamaged on one side of the building, painted over the ruddy brown stucco, is a colorful mural of the Virgin of Guadalupe.

Bedrock Catholicism rules in Northern New Mexico and with that comes the belief that life’s triumphs or tragedies are simply a matter of God’s will.

I wonder why they left the ruins still standing? Were they preserving the mural? Who knows, this can be a tough town to figure.

I cruise down the highway, past the white Corrections Department van parked in the middle on the median. Prisoners in orange jumpsuits stoop over in the roadside weeds to pick up trash, they never seem to stop moving but they always look up as you drive by.

I give a slight wave, they nod with their chins and we all go back to our lives.

I go on past the chopped and dropped Neons with their dark tinted windows, parked by the mobile homes clustered in compounds, their wrought iron bars and chained chows there to keep the thieves at bay.

On past the place where the famous black and white photographer, Ansel Adams, took his picture, “Moonrise over Hernandez”.

It’s a tribute to photography’s basic truth; it’s really all about being there.

Adams lucked out and caught a full moon rising over the distant Sangre de Cristo mountains while the crosses in the old church’s graveyard were lit up by the fading rays of the setting sun.

The result was a captivating photo and one I find somehow revealing of the fatalism and hope that is Northern New Mexico.

It is a place where one encounters the desperation of a twitchy heroin addict casing cars in the supermarket parking lot, countered by the pride and determination of a single, teenage mom, working days at the local convenience store and schooling nights at the community college.

It’s a tough place to live, I know, I did it for years while working as a reporter for the local newspaper and later with a non-profit trying to help this rural community deal with its staggering number of heroin addicts and overdose deaths.

I’ve since moved on, but both the paper and the problem still persist.

I breathe a little deeper and push the gas a little harder.

I’m finally out into the country, where cows, pasture and empty hillsides keep the gritty city at bay.

This is Georgia O’Keeffe country, where the red rock cliffs, the seemingly endless vistas, the towering mountains and the stark beauty of the high desert can certainly be inspiring.

I sense the river and its possibilities ahead, I catch a glimpse of it off to the right just after passing the two little roadhouse bars at the El Rito turnoff.

It looks good, not too high and not too muddy.

This stretch of the Chama is a tough piece of water, and much like Adams’ photo, timing here is everything.

And that time is in the fall when they bring down the water flow at the end of the irrigation season. Then the level slowly begins to drop and the normally ruddy colored water begins to clear. Sometimes it seems to take forever for the silt to settle and then just when it seems about right, they kick up the flow again for some reason and the wait resumes.

But as the time grows near I find a way to slip out of work early and make the fifty-mile roundtrip to check on the water. It’s difficult to gauge unless you see it.

It’s all in the color, like a cup of milky tea.

And then if it’s right, the fish will let you know.

There’s the tug and then the run and in the waning light of day you cradle one of the hardy browns that has managed to survive the mud, the insane flows and the harsh environment.

It’s an exciting time, but sad, too.

I know I will only have a few weeks to catch and release the biggest and best browns on this stretch of river because there’s other guys out there, waiting for the right time too and they’re determined to take fish home.

Within a month most of the browns will be gone and in their wake a trail of empty salmon egg bottles, spinning lures packages, cheap beer cans and cigarette butts mark their departure.

It can be depressing and then there are days like this.

It was a weekday, a little late in the season but I had the river to myself. I was on a bank high above a hole peering down into the water from behind a downed cottonwood. I was just looking for now and would soon slide down the bank and into the water to take a stab at it.

I was just leaning on the log taking it all in when a bad feeling suddenly came over me, that feeling you get when you thnk there’s something sneaking up behind you.

I slowly turned my head to look back over my shoulder and then, right there in the air above me, a Bald Eagle came sweeping down.

I ducked and she veered away, looking back at me as she glided off across the river to land upon a branch high up in a big cottonwood tree.

We watched each other for a moment and then she took off again with slow, full beats of her massive wings, flying off around the river bend and out of sight. 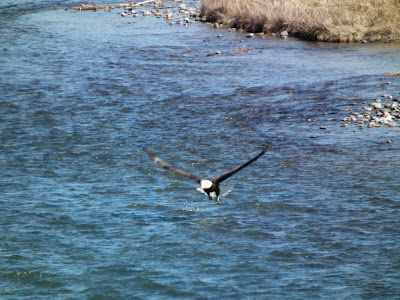 I laughed nervously to myself. Damn that bird had scared the hell out me.

I replayed the moment over in my mind. Her wingspread had to have been as wide as my outstretched arms. I saw the gnarly yellow skin around her talons, the white fan of her tail and felt the air rustle as she came at me.

Man, that was amazing, to come that close to an animal, the symbol of our country, something we had nearly driven to extinction.

I had seen Bald Eagles here on the Chama before and some down on the Rio Grande by Velarde. Then there was one in a cliffside nest up off the Red River near the confluence of the Rio Grande and plenty on the Baca.

It’s always a thrill to see them because they always tend to fly off before you can get near them.

This one was different.

This one got me thinking.

Then it came to me, maybe was she trying to scare me off.

I looked down at the river below.

We’d both been eyeballing the same fishing hole?

I slowly slide down the bank and crept up to a spot where I knew they’d be.

Later, I was sitting at the roadside bar, obsessing over what I must have done wrong.

I had snuck up on that hole like a coyote, placed the line perfectly with no splash and then tensed up in anticipation as I watched it drift over the spot.

I slowly pulled up the line, recast and waited again.

After the third or fourth cast I knew it wasn’t going to happen but I kept working at it until the sun set behind the mountains and it grew cold.

I shook my head, drained my beer and pushed myself away from the bar.

“I guess I’ll see ya next time,” I said to the woman working the bar.

She nodded and told me to drive carefully.

That wasn’t an option on this stretch of road, you either drove it carefully or died, I thought as I climbed into my old Dodge van.

The roadside descansos here told that story. Some simple crosses, others elaborate memorials, all marking the spot of those who had been killed on this nasty stretch of highway.

I remember the night I was coming back after looking at a piece of riverfront property in Medanales. I was following a car down the highway, it was one of those older model lowriders, a Chevy or Buick, just motoring along slowly, heading into town. I was impatient, itching to floor it and swing out and around the car but it was a moonless night, pitch black outside, so I waited until I was sure I could safely pass.

Then the lowrider began to drift off towards the shoulder. I began to lean on the gas when something made me hesitate.

I backed off and instead followed the lowrider off onto the shoulder and right past a pickup truck, dead in the water, in the middle of the highway. No emergency lights on, nobody standing outside waving down traffic, just left there in the dark.

I wasn’t that surprised, just relieved as we went around it and kept on going, flashing our lights to warn the on-coming traffic.

I checked with the cops later that night, but apparently somebody hauled the truck off before anybody got hurt, because they didn’t know anything about it.

I remember how I couldn’t sleep for a while because I kept thinking about how close I came to wrecking if I had impulsively passed that lowrider.

Yeah, this sure could be a tough place to live.

I would go back to the eagle’s hole the next week and again the following week next but with no luck.

Maybe there weren’t any fish left in there, maybe the eagle or the bait fishermen got them all already.

I was just chasing a hunch and it wasn’t panning out.

But then late in the season I found myself trying the hole again. I went to lift my line off the water and I found it hooked on something.

I tugged a little and it held fast. I cursed and then began reeling in as I waded up to it, I’d have to get out in front of it to try and pull it loose. By then I’d have to write off the hole, all semblance of stealth gone.

Suddenly the line twitched and began to move downstream, I lifted the rod and felt the weight and knew instantly I had been right about this hole all along.

I laughed liked a crazy man and began working on bringing her in.

From the depths she came, a hefty brown, barely discernable in the tawny water. And then I saw the fading, white claw marks across her back.

Seems that eagle gave this brown a try too but couldn’t quite pull her out.

She was a big fish, I pinned her against my leg, one hand under her belly as I quickly slipped the barbless hook out of her lip.

She slipped back into the water and faded away, hopefully to live and fight another day, just like some of the tough, old spanish folks who inhabit this land. 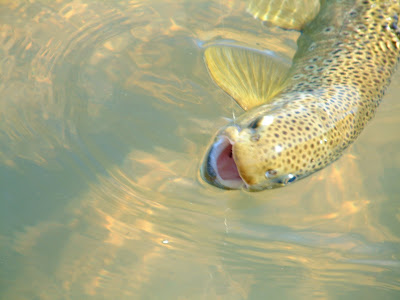 One Response to The Rio Chama – Busted Butt Blues