Comanche Creek – Return to My Roots 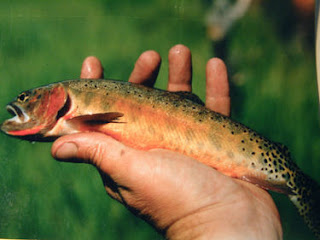 The hot, dry summer air trembled slightly. I stopped my cast and looked about.

Nothing moved except the flies buzzing about my head, crawling upon my bare legs, tickling me.

I cocked my head back and looked up.

I could see tool marks on the belly of the B-1 bomber as it silently passed overhead.

It was flying just off the deck, hugging the contours of the earth, just below the radar.

The engines’ great roar followed and left me screaming at the top of my lungs.

And then it was gone.

I anxiously looked around hoping to find someone, anyone, else who’d seen it too.

But I was alone, as I had been all day.

The flies continued their endless assault, a fish slowly rose and I returned to my pursuit.

Hunched over, knees bent, casting long loops of line, upstream, into the narrow current flowing between the brushy banks.

The fly settled quietly and gently floated back downstream. I steadily picked up the slack line between my rolling fingers.

The fish came out from under the cover and sanctuary of the bank and rose to lazily sip the fly off the water.

I gently raised my arm and the hook was set.

She splashed and ran with a hearty pull as she attempted to break free. I brought her in quickly, rolled her on her back and slipped the hook out.

I had a camera that day and captured the native cutthroat in all its glory, resting in the palm of my hand. A brilliant red slash under the jaw, a blaze of orange tanned the belly, deep green across the top of its back.

It had been years since I’d seen that photo or thought of that day.

That was until recently when I sat down to write a story for the local paper about opening day on the Valle Vidal.

This was where I learned to fish, fooling naïve, little cutthroats with rudimentary, hand-tied Caddis flies.

Knee-deep in Comanche Creek wearing shorts and sneakers, warm beers in the back of my vest. Over on the Rio Costilla, catching brookies below the dam, running all the way back to the truck in a thunderstorm, the crack of lighting spurring me on.

Camping at McCrystal before they improved the road to bring in more campers and started charging a fee.

Back when opening day meant you shared the river with people you might know, the New Mexico license plates far outnumbering the others.

It’s since gotten crowded on the Valle Vidal and I have stayed away as this beautiful mountain oasis has grown more popular. No crime in that, it’s what saved her in the end. She’s protected now from oil and gas drilling, thanks to a great public outpouring and our representatives in Washington D.C.

So this year I went back. I returned to my roots and found the grand old lady still as sparkling and refreshing as a twenty-year old.

She just has a lot more suitors these days.

I slipped under the “exclosure” fencing installed along Comanche creek. They were put in to keep the cows and elk away, to encourage willows and other vegetation to grow and provide cover and shade for the fish.

There were other signs of work along the banks where it looked like they’d driven small-diameter cedar posts into the streambed to protect them and willow shoots had been planted.

This was some serious restoration work and done in preparation of a much bigger plan to restore native Rio Grande cutthroats back into this, their historic habitat. (see related article on the Valle Vidal)

The flies were still there as where the cutthroats, eager and willing to take my fly and still as beautiful as that day years ago when I captured the picture.

I craned my head back and looked up. There were no more military jets. Only big, billowing white clouds building against a remarkable blue sky.

I looked around at the surrounding hilltops dotted with trees, the steep slopes covered in grass and shale, a cathedral-like spire of tall rocks seemed to beckon me.

A truck roared by in a cloud of dust and fading music.

Hell, I thought, even on a busy day the Valle Vidal still has its magical touch.

One Response to Comanche Creek – Return to My Roots