As dawn broke I gazed up at the purple tinged clouds and absently chewed on a piece of dried fruit. At my feet lay a pile of elk pellets and a slew of hoof prints, the tree upon which my rifle rested bore fresh antler marks and I eyed the nearby watering hole expectantly.

We had gotten up early that morning in a scene reminiscent of my Army days. Men in camouflage and boots, the clatter of gear and rifles, nervous anticipation cloaked in bravado.

We crawled up the mountain in four-wheel drive, the two pickup trucks grinding along the rutted jeep trail in low gear, our headlights barely piercing the darkness.
We emerged from the woods upon a mountaintop meadow.

It was here where I tried the evening before to sneak up on a group of grazing elk but when the wind came up on my back, they caught my scent and scattered.

We were just out scouting then but today it was for real and this was my first elk hunt.

We followed another road off into the trees and stopped at a fence line where we parked the truck and then headed off on foot down to a nearby watering hole.

It was here where we hoped to ambush some elk at dawn.

I looked off downhill and all I could see of my hunting partner was his blaze orange cap bobbing about in the hazy, morning light.

Waiting and watching in the tree line I had a chance to reflect on how I ended up on this solitary mountaintop with a military surplus, M-1 rifle and a hunting license.

I had earned the rifle competing in several shooting matches sponsored by the now disbanded Caja Del Rio Gun Club back when they had a range south of Santa Fe in the early 1990s.

That range has since been bulldozed to make way for some soccer fields.

The rifle cost $165 and arrived in the mail, sent by what was then the government’s Division of Civilian Marksmanship.

Built during WW II by the Springfield Armory, the rifle shoots straight and far. Truly a beautiful piece of machinery and other than a 1961 Dodge pickup and several longtime friends, it’s the only antique I own.

I’d never considered using it for hunting until now.

When my friend Mike Giddings first invited me to go on this trip, I was hesitant.

I’ve been an avid catch and release fisherman for years and would much rather shoot pictures than wildlife. 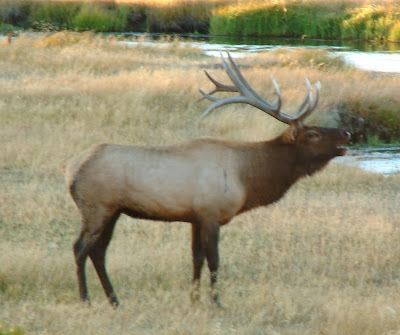 A bull elk photographed by the author during a trip to Yellowstone National Park in the fall of 2003.

But I had to admit I was intrigued by the idea of bringing home my own meat.

My friends who hunted argued that due to the limited number of natural predators out there, hunting was necessary to help keep the state’s elk population in check. And the meat is high in protein, much leaner than beef, range fed and completely organic.

But more importantly hunting was a time honored New Mexico tradition that brings family and friends together for great outdoor adventures.

Yeah, tell that to the elk, I thought.

But I had to agree that one should know where their food comes from and play a hand in obtaining it.

So Mike started planning. He wanted to return to an area high in the mountains above Angel Fire where he had hunted once. He hadn’t had any luck on that trip but liked what he saw up there.

Mike did his homework and found the success rate in this particular unit was pretty good and since we were after a cow or young bull, we stood a pretty good chance of bringing home some meat, he said.

As luck would have it we each drew out in the Department of Game and Fish’s annual July lottery and our hunt was on for early November. It only cost $65 to apply and buy the license.

Upon hearing the news, another good friend, Glenn Jaramillo of Glenn’s Garage in Santa Fe, told me we were going to need plenty of help if we managed to drop one of these 500-lb animals.

A veteran of many a hunt, Jaramillo offered to come along and help us with the hauling and butchering and anything else he could do to make the trip a success for us.

Glenn invited his buddy, Ron “Randy” Santistevan of Cerro, to come along too and we now had two hunters with years of knowledge and experience to help guide us on this trip.

As the hunting date grew near so did our anticipation and we got together frequently to discuss tactics and go over the list of gear to bring.

I went down to the department store and bought a camouflage hunting jacket and a blaze orange baseball cap.

I spent weeks humping around the hills south of town with a fully loaded backpack and my rifle to condition myself for the mountains.

I familiarized myself with the state hunting rules and regulations and read a good book about elk hunting.

And when the hunt date arrived I felt like I was ready, butterflies aside.

We set out for the mountains on a beautiful Indian summer’s day, hauling two travel trailers behind the pickups, headed north just like I’d seen others do over the years.

Now I was in one of them and it felt good. 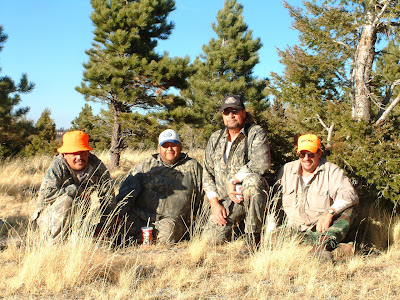 From the left: Glenn “Chewy” Jaramillo of Santa Fe, Ron “Randy” Santistevan of Cerro, Mike “Chico” Giddings of Los Lunas and the author during their first hunt together in Northern New Mexico during the fall of 2007.

We found a suitable campsite in the national forest just off the road at the base of the mountain, set up quickly and then headed uphill in time to catch the sun setting.

Sure enough there were signs of elk everywhere and then we came across the herd I spooked at the water hole.

That was last night and now I was snapped out of my daydreaming by the sound of someone blowing an elk bugle and cows responding, way off down the hill.

I couldn’t believe it. They were here.

The ensuing silence was deafening, my every footstep sounded like a stampede as I picked my way out of the tree line and headed downhill.

I could see Mike’s neon orange hat up ahead in the high grass, kneeling by a small pine watching the meadow below through his binoculars.

I crouched down and then low crawled to a crest in the meadow alongside Mike. When I peeked through the thick, dry grass it was just in time to see a herd of elk coming out of the tree line.

They were just a couple of hundred yards downhill, maybe a half dozen or more strung out across the meadow.

Mike took the first shot and I watched as one stumbled and fell in the grass.

The rest scattered, several ran back into the tree line, some continued across the meadow and one stood looking uphill.

I said I had her and when she turned broadside I got off two good shots before she disappeared from view.

We hustled down the hill and when we got there we were baffled to find no sign of the two elk.

We were sure we’d hit them and searched frantically for them.

We followed deep hoof prints left by the fleeing elk that led back into the woods and off down the steep side of the mountain. We didn’t find any blood trails and soon lost those tracks in the deep forest.

We went back to the spot where we thought they had been hit and finally found a faint stain of blood on top of some grass.

Looking more closely I found a trail of bright, red blood leading off into the opposing tree line. 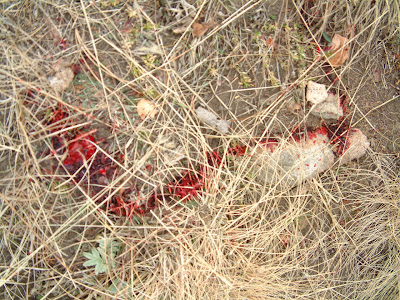 I followed while Mike stayed behind looking for sign of the other elk.

I was alone in the woods, heart beating in my ears, trying to quiet my deep breaths when I saw the wounded elk slowly limping off through the trees. I felt a rush of apprehension as I crept up behind it, stopping when it stopped but steadily gaining ground on it.

It finally came up lame and looked back at me as I emerged from behind a tree.

I dropped to one knee and sighted down the barrel and for the longest time we just looked at each other.

I felt a pang of guilt, maybe regret, but when it turned to try and limp away, I pulled the trigger and got off a clean shot, just behind its shoulder.

The elk fell and lay dying. It was brutal, bloody work but it was done.

We called in Glenn and Randy on the radio, located the other elk in the tree line and our hunting was done.

We had bagged two elk within hours on our first day and as the guys set to work skinning and butchering the animals, they couldn’t stop telling us how lucky we’d been.

Most hunters have to pay more dues, they said. Waiting in tree lines for hours on end, numb to the bone from the cold, hiking endless miles for days on end until the hunt ends and they go home empty-handed.

They might be right about that but we also came prepared, got up early and found a good spot.

That,and having good friends at your back, counts for something too. 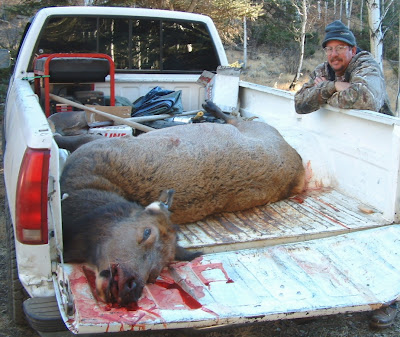 The author looks over one of the cow elk taken during his first hunt with friends in Northern New Mexico in the fall of 2007.