Maps – Where to Get Them and Why 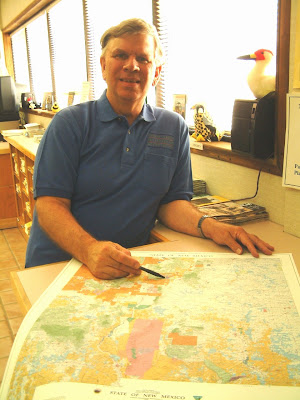 Face it, if you live in New Mexico, sooner or later, you’re going to need one.

And Santa Fe boasts two great shops for finding maps, books and other information about the state.

With almost half the state under public ownership one of the best maps to illustrate that may be the BLM’s (Bureau of Land Management) color-coded “surface management responsibility” or land status map available at the Public Lands Information Center at 1474 Rodeo Road in Santa Fe, N.M.

Richard Atkinson, the center’s manager, says the map is just one of many in the information center has available to the public and it’s a handy tool for those exploring the state especially those preparing for an upcoming hunt.

Atkinson uses an overlay on top of the land use map to shows the state’s hunting units and then the associated BLM or Forest Service maps that are needed for that area.

The same system is available online at www.publiclands.org , just pick New Mexico from the pull down list of states at the maps center, click on the hunting unit index tab and the maps you need will pop up.

The land status map is available in a four-foot wide and five-foot tall wall hanging or a smaller version about half that size and is great for viewing at home before setting out on the road.

The Public Lands Center also features every available Forest Service and BLM map for the state as well as a collection of private maps and atlases that make a road trip easy.

Atkinson said he prefers BLM maps to Forest Service maps because they show topography and are contiguous and can be assembled for a bigger picture of an area with no gaps between the maps.

That’s important for those hiking into the woods, he says.

Forest Service maps are limited primarily to the forest they cover and do not feature topography unless it’s a wilderness map, he notes.

In addition to those federal agencies’ maps Atkinson’s shop has two versions of the state atlas, the Road and Recreation atlas and the Gazetteer. Both are good books of maps for general use throughout the state.

Atkinson recommends everyone own one of these and then start collecting maps for more specific areas such as the state’s national forests, wilderness areas and other places of interest.

The information center also includes a great collection of hunting, fishing, hiking, cooking, history and other books with a New Mexico theme. There are also free brochures available from various state agencies and other information assembled to help visitors utilize the state’s public lands.

“You really can’t find the kind of collection we have here anywhere else,” he said.

The Center opened in 1996 and is operated by the private non-profit organization, Public Lands Interpretive Association with offices in every state and a website that brings them all together in one place.

Those seeking more specific maps can visit the Travel Bug at 839 Paseo de Peralta near downtown Santa Fe. Those in the know have been picking up maps and books here for years and the service and selection is why.

Here one can find and have printed a United State Geological Service topographic map for anywhere in state, or the country for that matter, says owner Greg Ohlsen.

The store features maps from all over the world or something closer to town such as a city or county produced map. The Travel Bug can produce aerial and satellite photos and also stock the just released, updated version of the popular New Mexico atlas, “Roads of New Mexico.”

And customers can sip cup coffee or enjoy a fruit smoothie while browsing the collection of maps, books and related items found in this distinctive shop.

The store also carries and services the Garmin line of satellite operated, GPS (Global Positioning System) products that not only help one find where they are in a strange town but can also be used to map one’s hikes in the woods.

Ohlsen said he used one to map all the day hikes for use in the Sierra Club’s latest version of “Day Hikes in the Santa Fe Area.”

“It’s amazing stuff,” he says. For more info about GPS check out www.garmin.com .

One of the pricier GPS units allows the user to strap an electronic transmitter on a dog’s collar and then monitor the dog’s movements while out hiking.

The unit will show how far away and in what direction the dog is located in relation to the handheld receiver carried by the owner. The units have a range of about five miles in open country and have helped Ohlsen find his lost dogs on a number of occasions, he said.

But Ohlsen says despite the handheld devices great capabilities they just can’t compete with a map for showing the big picture, the great landscape of New Mexico.

For that one might want to drop in to the state Department of Transportation (DOT) at 1120 Cerrillos Road where in the lobby one can find a free New Mexico road map and one for most every state in the country.

“I can fill this here today and by the end of the week they’ll all be gone,” says
Virginia Neville, receptionist at the DOT headquarters a she points to the display rack in the lobby. “I don’t know how people know they’re here, we don’t advertise.”

The rack doesn’t feature any state road maps from either California or Arizona because both those states refuse to provide them for free, said Michael Urioste, a DOT administrator who orders the maps for the free rack.

New Mexico hands out about a half a million free maps a year, Urioste said, primarily to distributors such as chamber of commerce’s, visitor centers, state and federal agencies and even private businesses.

It’s just one of those little known public services the state performs with little fanfare but great results. So grab a map and explore New Mexico today!