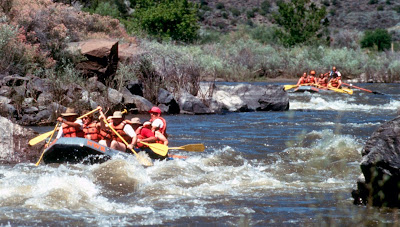 Recent wet weather, cooler temperatures and good snow pack at Wolf Creek Pass in Southern Colorado have apparently saved the Rio Grande’s high water rafting season from what some feared would be an early end.

“We thought we were doomed in March,” said Mike Boren, a river raft guide for New Wave Rafting of Santa Fe.

That’s when a spell of warm, dry weather began quickly melting mountain snow pack and brought on peak water flows of about 2000 cubic-feet-per-second (cfs). Then the water began to come down, leading some to believe the high water season had already come and gone.

Instead the runoff season has picked up again and is fueling the high-water flows that allow rafting companies to offer their most exciting and lucrative trips through the Taos Box.

“To be profitable we really need a Box season,” said Boren’s boss, Steve Miller. “We have a lot of locals who come when there’s exciting water and right now the flows are fabulous.”

The Box was running at 950 cfs on Wednesday (May 30, 2007) and the higher flows could continue for a few more weeks to come if the weather cooperates, said Richard Armijo, a snow surveyor with the USDA’s Natural Resource Conservation Service in Albuquerque.

“There’s still pretty good snow pack in place at Wolf Creek Pass,” he said.
The 11,000-foot pass in Southern Colorado which feeds into the Rio Grande watershed is still holding 83-percent of its snow pack which accounts for almost 25 inches of water, Armijo said.

“That should be good for two or three more weeks,” he said.

That and good rains last summer and fall increased soil moisture content throughout the region to allow melting snow and recent rains to fill the creeks, streams and springs feeding the big river.

More information regarding snow pack and reservoir levels and other water information can be found at their website .

“That’s great news. We were hoping to have a Box season through the end of June,” said Miller. For more info about trips check their website .

The Taos Box provides rafting enthusiasts with a 17-mile Rio Grande gorge trip from the John Dunn Bridge north of Taos near the village of Arroyo Hondo downstream to the Taos Junction bridge near Pilar.

Bill Blackstock of Far-Flung Adventures of Taos said the Taos Box trip is a big draw for his customers as it provides a full day’s adventure on the water with plenty of majestic gorge scenery, wildlife viewing and whitewater thrills.

“It starts out mellow,” Blackstock said. “But by the last four miles it’s nothing but rapids. If you love the water this is the place to be.”

Blackstone said he too hopes to stretch out the Taos Box season as long as possible. Check their website for trip details.

Rio Grande water flows from Colorado are dependent upon how much water is pulled from the river for irrigation and ground water recharge in southern Colorado.

If rains keeps farmers fields wet like they have recently and wind and temperatures remain moderate, the high water could keep coming.

But those flows could also begin to wane if the region begins to dry out.

“That’s why if you want to get in on some high water, your best bet is probably going to be the next couple of weeks,” said Rico Salazar of the Pilar Yacht Club Café, a retired rafting guide who books river trips and shuttles vehicles back and forth between the put-in and take-outs for rafting outfits such as Far Flung Adventures.

Most rafting companies will cease to offer the Taos Box trips once water flows get down around four to five hundred CFS and there’s no saying when that may occur as that’s entirely dependent upon the weather.

But even once the high water ends, the five-mile Race Course section of the Rio Grande will still continue to provide rafting enthusiasts with plenty of white water thrills from Pilar down to the Taos/Rio Arriba County line just north of the Dixon turn-off.

“We can always run the Race Course,” he said.

Bill Bailey, Recreation Manager for the Taos Field Office of the Bureau of Land Management which oversees rafting on the Rio Grande in northern New Mexico, said snow pack in the Sangre de Cristo Mountains was normal for this year and has helped keep water flows in the Rio Grande high.

Bailey noted that water flows on the Rio Grande on May 29 registered close to 400 cfs at the Colorado state line but had more than doubled to 950 cfs when measured at the mouth of the Taos Box the same day.

Bailey said natural springs along the Rio Grande in the Wild Rivers area north of Taos and streams such as the Red River and the Rio Pueblo de Taos feed into the Rio Grande and help boost its flows.

Bailey was guardedly optimistic that the river would continue to see good flows throughout the summer.

Bailey noted that climatic change in recent years has forced river runners to adapt to lower water flows on the river and that has helped them alter their services and extend the rafting season.

“Back in the late 1980’s everybody would be disappointed it (the Rio Grande) wasn’t flowing at 2000 cfs this time of year,” Bailey said. “It was no fun unless it was roaring.”

During those days customers hung on for dear life while an oarsman piloted a big raft downstream. Those kinds of trips were dependent on big water and produced big thrills.

But now companies have smaller, more easily maneuverable rafts which can negotiate the river better during low water conditions. Customers can now also participate in helping paddle the raft or pilot their own inflatable kayak trip during a guided trip, Bailey said.

“It’s a different kind of river experience, there’s time to enjoy the scenery,” Bailey said. “I think people have responded to that well.”

But the Rio Grande isn’t the only game in town for river rafters.

The Rio Chama is also flowing well right now and has the added benefit of controlled flows out of upstream dams on weekends during the summer months, said Mary Scofield, President of Adobe Whitewater.