New Mexico Game Commissioners at a Nov. 1, 2007 meeting in Raton where problems with the state Game and Fish Department’s native trout restoration projects were revealed.

The state Department of Game and Fish’s efforts to restore Gila and cutthroat trout to portions of their native territory has been marred by setbacks including the use of an impotent poison to try and kill off non-native fish in one stream and the apparent restocking of another with impure, native fish.

State game commissioners were advised of the problems during their most recent meeting in Raton on Nov. 2, 2007.

Department officials discovered during a recent follow-up inspection of Comanche Creek in the Valle Vidal that at least 25 fish had survived attempts to eradicate all fish from the stream this summer, reported Mike Sloan, Chief of the Fisheries Division of the state Department of Game and Fish.

The creek’s fish population underwent unlimited angler harvesting, physical removal through electro-shocking and then an application of the chemical rotenone to poison any remaining fish before the sterile creek could be restocked the following year with pure-strain, native, Rio Grande cutthroat trout.

The effort is part of an overall, restoration scheme to remove any non-native fish from most waters throughout the region and reintroduce the native cutthroat back into its historic habitat.

The plan is expected to reduce threats to the Rio Grande cutthroat trout’s survival and eliminate the need for protection under the Federal Endangered Species Act which could result in land use and sport fishing restrictions.

Sloan told game commissioners that department officials were surprised to see any fish remaining in the stream. He speculated that perhaps the small fish had survived because at the time of the treatment they had yet to spawn, were hidden deep within a gravel bed and possibly protected by a fresh supply of spring water to ward off the poison. 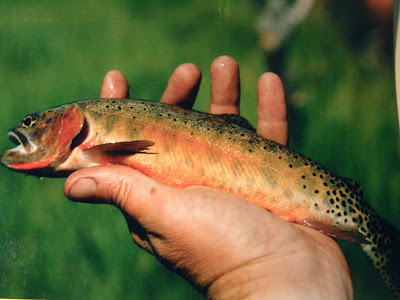 A cutthroat trout caught by the author in Comanche Creek of the Valle Vidal sometime in the early 1990s.

Sloan said two fish seen in the stream during the follow-up inspection were thought to have escaped and their continued existence poses a problem for the department, as it wants to reintroduce a pure strain of trout to those waters.

After Sloan gave his presentation to commissioners, Jim Baker, Wildlife Manager for Ted Turner’s Vermejo Park Ranch, which is located next door to the Valle Vidal, reported yet another problem with the cutthroat reintroduction effort on its property.

Baker said a shipment of cutthroat trout provided by state Game and Fish to the ranch several years ago to replace trout in a cleared out section of Costilla Creek is now thought to have been “contaminated.”

“We’ve seen a lot of hybrids in the upper stream,” he told commissioners.

Sloan responded that the department’s cutthroat rearing hatchery at Seven Spring from which the load of tainted trout had originated could be the culprit as rainbow eggs were used to test the facility before it came online.

Cutthroat and rainbow trout can crossbreed to produce a hybrid known as a cut-bows and it’s possible some such fish hatched and later made it into that load.

Sloan said the department would “make it right” with Vermejo Park Ranch before proceeding with any other reintroduction plans on the private ranch.

Turner has long pursued his own wildlife conservation and reintroduction efforts on his private ranches and is cooperating with state Game and Fish officials to reintroduce the cutthroat throughout the shared watershed in the Valle Vidal area.

After Baker’s remarks, another department official reported to commissioners that there was yet another problem with reintroduced native trout, this time in the Gila Wilderness in southern New Mexico. 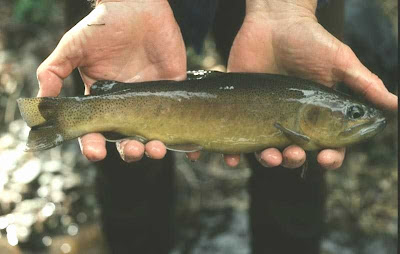 A Gila trout.Photo courtesy of New Mexico Department of Game and Fish.

Dr. David Probst, Native Fish Biologist with the state Department of Game and Fish told commissioners that they have since discovered brown trout in the recently treated upper west fork of the Gila River.

“A few browns survived and reproduced and have spread throughout the system,” he said.

Probst blamed a batch of “poor quality” antimycin used to chemically clear the steam of fish for the problem.

Probst said in an interview after the hearing that antimycin is a bacteria derivative grown in a lab and the batch they used was found long after it had been used to have had substandard potency.

Probst explained that the difference between the two pisticides, antimycin and rotenone, is that the first breaks down rapidly and requires less to use while the latter, which is derived from a plant root, has longer life and requires a greater amount.

Their uses are dictated by conditions such as the amount of water to be treated, its location, temperature, turbidity and other factors.

“Sounds like there’s been a lot of complications,” Commissioner Dutch Salmon, said following Probst’s remarks. He and fellow commissioner, Jim McClintic, both voiced reservations about chemically re-treating streams a second time due to the controversy surrounding such work.

Both Sloan and Probst said after the meeting that they intend to weigh their options and see what course of action they can take to get their programs back on track.
Officials are striving to obtain a sterile environment in which they can reintroduce native cutthroats so they can rule out the possibility of cross breeding with rainbows and eliminate competition from hardier breeds such as brown trout, both introduced breeds of fish.

In other action the board approved a measure create a special bag limit of two Gila trout so the department can use Gila trout from the U.S. Fish and Wildlife Service’s fish hatchery near Mora to stock Gila waters with the native fish and allow anglers to catch and keep them.

Gila trout dart about in a holding tank at the US Fish and Wildlife Service’s fish hatchery in Mora, NM.

The hatchery produces an estimated two to three thousand excess Gila trout each year from its rearing population of pure strain Gila trout. About 300 brood stock of 12-inches or more are scheduled to be stocked in the Forks area area of the Gila rivers in upcoming weeks.