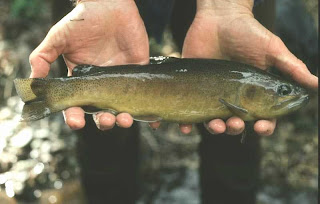 “It’s a wonderful thing,” said Dennis Johnson, 52, a New Mexico State University chemistry professor in Las Cruces and an avid fisherman of southern New Mexico’s Gila wilderness and forest areas. “I intend to be there on opening day. It’s a unique and historic opportunity. ”

The move comes on the heels of the U.S. Fish and Wildlife Service’s recent decision to downgrade the Gila trout from “endangered” to “threatened” which opens the door to limited angling. The Gila trout, Rio Grande and Colorado River cutthroats are New Mexico’s three native trout.

Jerry Monzingo, a Forest Fisheries biologist for the Gila National Forest, said he expects the Black Canyon area to see the most anglers on opening day as it is the most accessible of the fours streams to be opened for Gila trout fishing.

“You can step out of your vehicle and fish for trout there,” he said.

Nonetheless those venturing into the Gila should be prepared to deal with day-time highs in the 90s, routine afternoon thunderstorms and hiking into a remote, wilderness location, Monzingo said.

“The mornings should be best,” he said.

Iron Creek will also be open to fishing for Gila trout but all year round and with a two fish bag limit. This creek requires a moderate hike in from the Willow Creek camping area and some streamside bushwhacking, Monzingo said.

The Gila trout here may look pure but are suspected of having some rainbow trout blood in them hence the lack of a catch and release requirement, he said.

Both waters require the use of artificial flies or lures armed with a single barb less hook. Anglers intending to fish Iron Creek and Black Canyon are required to possess a special Gila trout permit along with their fishing license. Visit the Department of Game and Fish website at www.wildlife.state.nm.us and follow the “Buy Licenses Online” link at the bottom of the homepage.

Monzingo recommends those hiking into the Gila and Aldo Leopold Wilderness areas obtain area maps available at any Forest Service center or through the Public Lands website at www.publiclands.org/

Two other creeks will also be opened to fishing for Gila trout — McKenna and Sacaton Creeks — where regular trout rules and bag limits will be in effect. These Gila trout populations are thought to contain rainbow blood also and require lengthy hikes to reach them.

The state Game Commission approved the angling choices at its March 2007 meeting in Las Cruces, according to a state Department of Game and Fish news release announcing the Gila trout’s open season.

Anglers seeking more information about these creeks, roads and other conditions within the Gila wilderness and forest areas can visit the Gila National Forest’s website at www2.srs.fs.fed.us/r3/gila/ or call their office in Silver City at (505) 388-8201.

The opening of previously closed waters to fishing represents a great achievement for many who worked for decades to see the Gila trout recovered enough that anglers could fish for them again, said Dave Propst, Fish Biologist for the state Department of Game and Fish in Santa Fe.

Propst credits the federal Fish and Wildlife Service and the Forest Service along with assistance from New Mexico State University, the University of New Mexico and conservation groups for working together to restore Gila trout from a low of just four streams and about 20 miles of habitat to 12 streams over 70 miles of suitable water.

“We’re pretty pleased with what we’ve accomplished but there is still a lot more work to do,” Propst said.

State Game and Fish officials will monitor angling impact on the Gila trout populations and make adjustments as needed. Efforts will also continue to reclaim streams and protect and restock them in an effort to restore the Gila trout to its native range throughout the region, Propst said. Angling opportunities will be restored as conditions permit, he said.

Fly fishing enthusiasts are excited about the prospect of the trout’s recovery and the opening of previously off-limits areas to fishing within the Gila wilderness and forest areas, said Paul Turner, president of the Mesilla Valley Flyfishers and a retired Fisheries and Wildlife Sciences Professor for New Mexico State University’s College of Agriculture.

Turner said he was involved in the Gila trout recovery efforts and that he is pleased to see his work produce results.

“This took long-term dedication to make this happen; dedication to the fish, wanting to see it recover and sticking with it,” Turner said.

The Gila trout was first listed as endangered back in 1966, which resulted in the suspension of fishing and closure of numerous streams within the Gila forest and wilderness areas.

Many Gila trout saved from fire, floods and drought during the recovery effort have since helped create new populations of Gila trout at the U.S. Fish and Wildlife Service state-of-the-art fish hatchery in Mora. A backup population of Gila trout is maintained at the facility and fish are raised for continued stocking.

“This is only the beginning, a drop in the bucket,” Jim Brooks of the U.S. Fish and Wildlife Service said of the recent successes and stream openings.

Brooks said pure strain Gila trout are deserving of the efforts made to restore them to their traditional habitat. Similar restoration efforts are underway in neighboring Arizona.

So far such efforts in New Mexico have included the removal of non-native sport fish such as rainbow and brown trout from Gila trout streams and the installation of barriers to prevent these fish from moving back into reclaimed areas.

Gila trout are well adapted to the wildly fluctuating temperatures and water flows found within the Gila wilderness areas.

“The best fish for this area is the native Gila trout,” Brooks said. “Not a stocked brown or rainbow.”

Other obstacles encountered during the effort to restore the Gila trout included local opposition to the state and federal government’s overall effort, especially, the use of a poison typically used to clear streams of non-native fish.

And the environment itself dealt its own harsh blow to the project as forest fires and resultant floods damaged trout habitat and set back restoration efforts at a critical juncture.

But the team has overcome many of those obstacles and as more streams are cleared, reclaimed and restocked the threat to the Gila trout diminishes, Brooks said.

“We’re not backing off on this project at all,” he said. “Black Canyon is a nice offering but the best is yet to come.”

Brooks said he expects to see the recently renovated stretches of the Upper West Fork of the Gila River and Mogollon Creek to produce results that locals may be looking for – good-sized fish in sustainable numbers available to anglers within the next few years.

And as the fishing expands and improves, Brooks said he expects local outfitters who typically rely on deer and elk hunters for guide work will find anglers making additional demand for their services.

But fishing guide Jerry Burton, 67, of Albuquerque, a former U.S. Fish and Wildlife Service biologist and the original petitioner to have the Gila trout downgraded, said he’s taking a wait-and-see approach to this initial offering of the Gila trout.

“These are relatively inaccessible areas, the fish are small and it can be tough fishing in there,” Burton said. “There are probably some individuals out there who may say this is a unique fish and I’d like to catch one and they might produce some business for the outfitters down there. But we’ll just have to wait and see.”

In the meantime Dennis Johnson of Las Cruces says he’ll be there on opening day, armed with his fly rod, hiking boots and an itch to catch one of those rare and sometimes troublesome, Gila trout.

“My experience down there is they’ll probably be very non-selective but real picky about the presentation,” Johnson said. “One bad cast and you’ll put them down.”

And what’ll he be fishing with you might wonder?

Why an elk-hair, caddis fly, of course!

See this article at the Santa Fe New Mexican also.