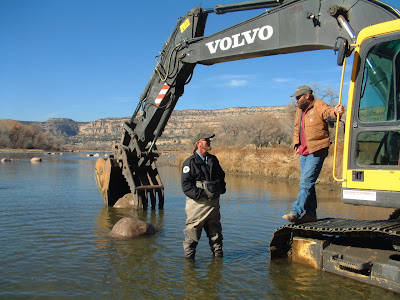 The third and final phase of an ambitious fish habitat improvement project on the San Juan River at Navajo Dam has been completed for the benefit of anglers who frequent the waters near Cottonwood Campground.

“It’s fishing good, fabulous,” said Jay Vigil, a guide and clerk at the Sportsman Bar and Grill in Navajo Dam.

Vigil said he and his wife, Martha, fished the project waters just days after the work had been completed.

“Now that’s my kind of river, lots of structure and deeper channels for the fish to hold in,” he said. “They did a fabulous job, people will definitely appreciate it.”

Crews spent about a week installing an estimated 500 tons of boulders in a little over a half mile of water fronting Cottonwood Campground and Recreation Area down to the Pumphouse Run, said Marc Wethington, San Juan Fisheries Biologist for the state Department of Game and Fish.

Water flows on the river were reduced by half from the usual winter flow of 500 cfs (cubic-feet-per-second) to accommodate the work for about a week.

A tractor with a movable arm fitted with a pincher claw worked out of the riverbed, picking up and positioning the boulders that had been hauled to the riverbank from a nearby quarry.

“I’d be concentrating on my work and then look out the side window and see the water passing by,” Davis said. “I’d get that weird optical illusion like we were floating away. That took some getting used to.”

But Davis soon became adept at picking up and dropping the boulders in their proper spot, scooping out a hole behind the rock and then tamping it down with a tap of the machine’s heavy bucket.

“He made short work of this,” Wethington said as he watched Davis work under threatening skies during one of the last days of the weeklong project.

Chris Philips of Riverbed Engineering of Pagosa Springs, Colo. provided oversight for much of the work.

“We’re not working with a natural river anymore because of the dam construction,” he said while inspecting the work late one afternoon. “We don’t have the natural flows and sendiment loads to do this work for us so we’re nudging the river in the direction it needs to be and we’re trying to make it look as natural as we can.”

Wethington, 43, a Kirtland native who has been stationed on the San Juan for the last 12 years, spearheaded the effort but praise those in the background who stepped up to contribute to the cause.

And the San Juan Fly Fishing Federation and the local BLM office were also instrumental in seeing the project through to completion, Wethington said.

Wethington estimated the three phase project cost about $175,000 including Sikes Act funds from the sale of habitat stamps required of all those who hunt and fish on public lands in New Mexico.

The latest phase of the project included reclaiming riverbank, narrowing and deepening the main channel, installing structure such as boulders and downed cottonwood tree trunks to provide attractive holding areas for fish.

Prior to the work, the river spread out at Cottonwood Campground over a wide, shallow, featureless expanse and did little to encourage fish to congregate there.
Up to 60,000 catchable fish, 9 to 11-inches in length, are routinely stocked in the “bait” waters of the San Juan each a year, Wethington said.

Many of those fish will now have more suitable habitat to live in and anglers should find it easier to locate and attempt to catch those fish, he said.

“We are trying to provide increased angling opportunities to as diverse a population of anglers as possible,” he said.

Over the last two winters similar work was done on a stretch of water below Simon Canyon and above the Gravel Pit where drift boats and their guides take out. That work has already produced benefits as evidenced during recent insect hatches which have revealed greater numbers of rising fish (see related article).

The San Juan is one of the west’s top trout waters, a legendary, trophy class trout fishery fueled by consistent flows and clear, cold water.

The river lures anglers from all over the world to stalk its quality waters which are home to an estimated 75,000 trout.

The first quarter mile of the river below Navajo Dam is strictly catch and release and the remaining four miles have a bag limit of one trout over 20-inches with the angler required to stop fishing once they have taken a fish of that size, that day.

Single, barbless lures are required on the quality waters.

Below the quality waters, anglers can use bait and the normal bag limit is in effect on public access to another 3.5 miles of river including the Cottonwood Campground area.

Anglers spend about 250,000 hours a year fishing on the San Juan River below Navajo Dam and contribute an estimated $20 million to $30 million to the state’s economy annually, Wethington said.

Future habitat improvement plans for the river include salt cedar and Russian olive tree eradication and restoration of native cottonwood and willows, Wethington said.
A plan is also being proposed to restrict tackle on the river to the use of two flies, Wethington said.

Anglers employing the use of multiple flies in triple and quadruple rigs are entangling and killing too many fish some fishing guides have complained, he said.

In an effort to limit damage to the river’s trout population the guides have suggested restricting tackle to just two flies, he said.

Wethington said there have been no studies of angler induced, trout mortality on the San Juan’s quality waters but most trout living in the river show evidence of having have been caught at least once and are expected to either die of old age or at the hands of an angler.

Wethington said anglers will have a chance to comment during yet to be scheduled public hearings and or by mail before the state Game Commission considers the rule change.