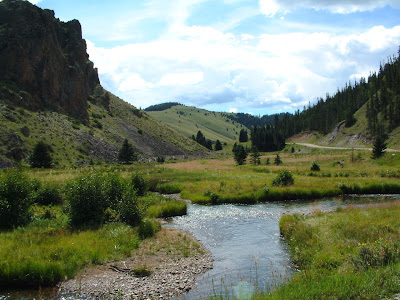 The Valle Vidal at the confluence of Comanche Creek and the Rio Costilla.

There’s a lot of activity scheduled on the Valle Vidal this summer including new fishing regulations, stream closures and a planned celebration of the pristine mountain areas’ new protected status.

The Valle Vidal opens for fishing on July 1st and this year anglers will be allowed to catch and keep two cutthroat trout a day from the upper reaches of Comanche Creek and all of its tributaries, said Eric Frey, Northeast Area Fisheries Manager for the state Department of Game and Fish.

The streams in this area are in the final phases of being cleared of all fish in preparation of restocking with pure, native, Rio Grande cutthroat trout, Frey said.

The special bag limit on Comanche Creek and its tributaries is in effect upstream of the confluence of the Little Costilla Creek and ends July 22nd, Frey said.

There will be no bag limit at all on these waters from August 4th to Aug. 7th to allow anglers to harvest any fish remaining in these streams, Frey said.

Frey stressed that catch and release regulations including the use of single, barbless flies and lures remains in effect on the upper Rio Costilla and all other creeks and streams within the Valle Vidal.

An exception to that rule is at Shuree ponds where the bag limit is set at two fish per day over 15-inches in length, Frey said. Shuree ponds were recently stocked with brood-stock sized fish, he added.

Recent restoration work on Comanche Creek watershed has included the removal of about 1,000 cutthroat trout, many of which were transplanted into the nearby Rio Costilla, Frey said.

“So there should be some good fishing up there this opening day,” he said.
Visitors to the Valle Vidal will find some other changes this year as cutthroat trout restoration work continues.

Comanche creek is slated for closure to anglers and all others starting August 8th through August 26th to accommodate continued work on the stream including the application of a chemical treatment to eliminate any remaining fish, said Donna Storch, fish biologist with the Carson National Forest.

Comanche Creek’s closure commences from it’s confluence with the Rio Costilla at Comanche Point upstream to the Clayton Corrals area, about five miles.

Vehicle traffic will be allowed on the main route, Forest Road 1950, that runs parallel to Comanche Creek and up to high country and Shuree Ponds but stopping and exiting of vehicles is prohibited, Storch said.

Motorists will also find a new in stream barrier installed on Forest Road 1950 where it passes under the roadway near the Little Costilla Corrals to prohibit the migration of fish into the upper reaches of Comanche Creek.

The barrier is part of the overall cutthroat restoration project to remove non-native fish from waters throughout the region and reintroduce the native Rio Grande cutthroat trout to its native habitat.

Restoration work will greatly reduce threats to the Rio Grande cutthroat trout’s survival and eliminate the need for protection under the endangered species act. Such a listing usually results in severe restrictions on forest use and sport fishing.

The success of those reintroduction efforts has been greatly enhanced by habitat work done on Comanche Creek and the surrounding countryside, said George Long, Wildlife Biologist for the Carson National Forest.

Years of overgrazing, placer mining, road building, timber harvesting and past fish stocking practices have all contributed to the degradation of Comanche creek and its tributaries thus threatening the Rio Grande cutthroat’s existence, Long said.

But much work has been done to close off and in some cases, eliminate roads that cause excessive runoff and erosion that fouls waters.

Stream banks have been rebuilt and restored with native vegetation to create a healthier environment for fish to thrive. And non-native fish such as rainbow trout and white suckers have been eliminated to allow the Rio Grande cutthroats a clean start in their restored home waters, Long said.

Much of that work has involved volunteer groups such as the Truchas Chapter of Trout Unlimited, New Mexico Trout, the Quivera Coalition and the Albuquerque Chapter of the New Mexico Wildlife Federation, Long said.

“We couldn’t have done it without them,” he said.

To celebrate the many efforts made by these groups and others to protect the Valle Vidal a Youth and Appreciation Day has been scheduled for July 21st at Shuree Ponds, said, Jeremy Vesbach, Executive Director of New Mexico Wildlife Federation.

“There’s a lot of celebrate and everybody’s invited,” he said.

The Valle Vidal waters now have state oversight and protection from water pollution and the forest lands have been granted federal legal protection from proposed gas and oil drilling, Vesbach said.

New Mexico’s congressional delegation and a great deal of public support led to passage of Rep.Tom Udall D-NM bill, the Valle Vidal Protection Act, this past winter.
Many organizations will be involved in the celebration including Amigos Bravos, Sierra Club, New Mexico Wilderness Alliance, Trout Unlimited and the state Dept. of Game and Fish. Activities such as a stream restoration workshop, a fly-casting clinic, a birding hike and other festivities are scheduled and many organizations will have informational booths in place.

And privately owned Costilla Park is also slated to open the same weekend as its neighbor, the Valle Vidal, said Billie Norsworthy of the Rio Costilla Cooperative Livestock Association’s office in Costilla.

The park offers camping at $20 a night and fishing along the lower stretch of the Rio Costilla where regular fishing regulations and bag limits apply.

Latir lakes and area streams in the high country hold plenty of cutthroat trout and will open for fishing and camping on June 29th. A four-wheel drive vehicle is required to climb to Latir Lakes and fishing is $7 a day and camping $20 a night. A state issued license is also required.

“If you’re going to come camping this is the time to do it,” Norsworthy said. “Conditions are great.”