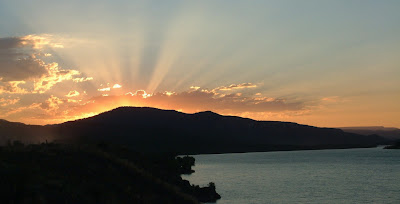 Tired of crowded campgrounds, rivers overrun with anglers, the same old scenery?
Consider a trip into Indian Country, some place like the Southern Ute Reservation just across the Colorado state line.

The Southern Utes have four great rivers running through their territory, the San Juan, the Piedra, the Pine and the Animas.

The Ute’s six-mile stretch of the Animas below the popular college town of Durango draws the most visitors to fish for a good population of rainbows and the chance to snare a large brown trout, said Ben Zimmerman, fisheries biologist for the Southern Ute Tribe.

But if one is looking for solitude, spectacular scenery and plenty of good fishing, they may want to try a trip to the less traveled areas of the San Juan and Piedra rivers in Indian Country.

“You’d be lucky to see anyone else out there with you,” Zimmerman says.

Both rivers’ headwaters can be found in the mountains ringing the town of Pagosa Springs and then they flow south to Navajo Reservoir. The 20-mile long Navajo Lake straddles the Colorado and New Mexico state line and the San Juan River re-emerges from below Navajo Dam as the blue ribbon trout fishery well known to many New Mexico anglers.

But it is the stretch of the San Juan River above Navajo Lake that many may not be familiar with as it flows south out of Pagosa Springs through Indian Country.

Taking Archuleta County Road 500 out of Pagosa Springs one will travel a gravel, country road along the river with several promising fishing holes beckoning anglers.
The countryside is dotted with farms, high piñon and juniper dotted mesas and great stands of cottonwood trees along the river bottom, which would make for a great drive during the fall. 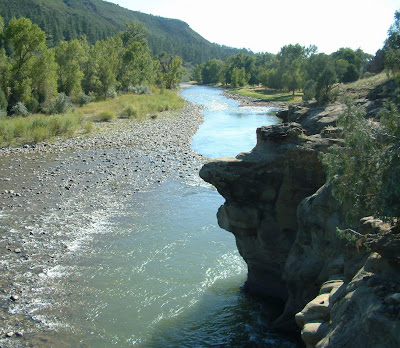 Those in possession of a Southern Ute Indian Tribe fishing permit can stop at any number of fishing access areas posted along the road and try their angling luck.
This stretch of river looks very like much like big, brown trout country where streamers, nymphs, bait and lures might work.

The Utes’ permits can be purchased in Colorado at shops in Durango and Ignacio where the tribe’s headquarters are located. They can also be purchased in New Mexico at stores in Farmington and at the Float and Fish fly shop at Navajo Dam.

However the tribe’s fishing permits cannot be purchased in the town of Pagosa Springs nor online and those venturing out of Santa Fe might want to contact one of the participating vendors and make arrangements to purchase one by mail. For more information about permits and rules and regulations check the tribe’s website at http://www.southern-ute.nsn.us/WRMWeb/fishing.html.

It should be noted that signs posted at the Utes’ fishing access sites state alcohol, drugs, firearms and dogs are prohibited while utilizing these areas. It’s unknown how strictly regulated these prohibitions are but visitors should exercise extreme discretion while on Indian lands. 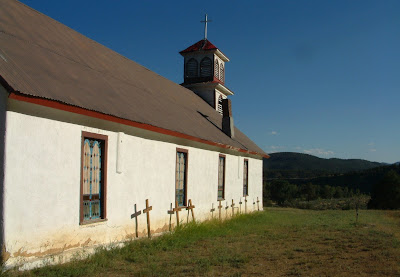 This long, lonely stretch of road eventually passes through the abandoned railroad town of Pagosa Junction where a magnificent, whitewashed, adobe church still stands upon a hill overlooking the town’s ruins.

Here one can wander among several still standing buildings, a great stand of cottonwood trees and wonder about the history of this former, bustling railroading town.

Continuing south on County Road 500, visitors will encounter the top end of Navajo Lake which features numerous pull offs for recreation. Camping and other services are available at Navajo State Park and more information can be found at http://parks.state.co.us/Parks/Navajo.

County Road 500 ends at the intersection of Colorado State Road 151 where one can head north to access the Ute Tribe’s six-mile stretch of the Piedra River up Fosset Gulch off Forest Road 613.

This stretch of river was rehabilitated back in 2000 with the installation of hundreds of tons of large boulders to shore up the riverbanks, re-channel the river and create healthier habitat for fish. 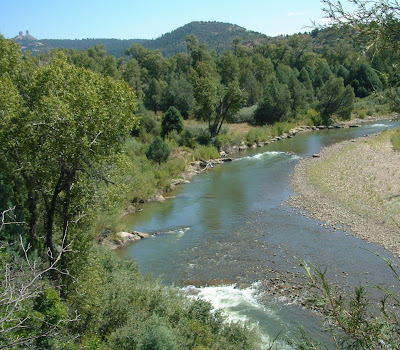 The characteristics of this stretch of the Piedra River are so appealing to the angler’s eye that it almost looks like a movie set, it is that well constructed.
So far the Utes’ plan seems to have worked with the area now attracting the occasional discriminating angler and stream surveys showing a good population of rainbows and some large browns trout lurking in the depths, Zimmerman said.

Anyone catching a rare, red-bellied, round-tailed chub from Southern Ute Reservation waters is asked to handle the fish carefully and return it unharmed immediately to the water, Zimmerman added.

This stretch of the Piedra River flows through a heavily forested, cottonwood canyon flanked by rolling hills, some rocky mesas and an occasional pasture on the far bank and once again should prove to be a spectacular drive in the fall.

Wildlife viewing opportunities are abundant with raptors in great numbers including owls swooping over the road and a coyote jogging ahead of the vehicle during a recent trip. At one point a horse emerged from the woods, walked up to the vehicle and allowed a quick rub of its velvety nose before running off in a clatter of hoofs and cloud of dust.

Visitors will see by map that Forest Road 613 cuts through to Colorado State Road 160 between Durango and Pagosa Springs, but should note that a private property owner has since installed two locked gates across the road blocking access.

It’s unknown if and when this issue will be resolved to the public’s benefit.
From this stretch of the Piedra River visitors can also see the twin spires of the Chimney Rock Archaeological Area in the San Juan National Forest located between Durango and Pagosa Springs. 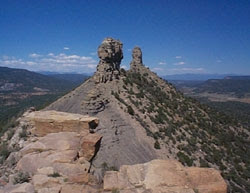 This hilltop Indian ruin is a great side trip off State Road 151 and features a guided, interpretive walking tour and spectacular views from the mountain top fire tower. The site is open May 15th through Sept 30th and more information can be found at http://www.chimneyrockco.org/mainnew.htm.

And on the far end of State Road 151 visitors to the area will find additional fishing and camping at the Southern Utes’ Capote Lake.

Overall this area of southern Colorado in Indian Country offers much for those seeking to get away from the crowds and constrictions found on public lands during summer months.