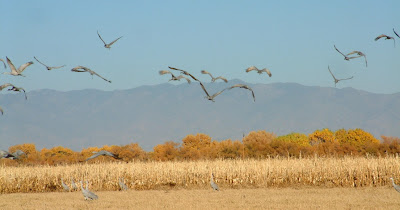 Bird watchers flocking south to catch the annual return of the cranes this year can expect to find new bird-watching blinds, hiking trails and other accommodations at the state’s Ladd S. Gordon waterfowl management area in Bernardo.

“It’s a neat little place, quiet, out of the way and a great spot for the public to view wildlife,” says Mike Gustin, Assistant Chief of the state Department of Game and Fish’s Conservation Services Division.

Every winter the 60,000-acre Bosque Del Apache National Wildlife Refuge, located about 20 miles south of Socorro, attracts and serves as home to thousands of migrating cranes, ducks and geese.

The state’s mission at the waterfowl complex south of Belen is to minimize the impact of those visiting waterfowl by providing habitat and enough grain to feed about half of the estimated 40,000 cranes and geese that arrive each year.

By providing feed and habitat to the wildfowl, the state helps cut down on damage to surrounding farmers crops and fields, provides opportunities for bird hunters, helps disperse flocks to minimize the spread of disease and provides sanctuary and breeding grounds, Gustin says.

Gustin noted that the birds can be especially destructive for farmers who have planted alfalfa and winter wheat or still have red chile standing in the field.
“Cranes just love red chile,” Gustin said. “So we try and bring them to us so they’re not eating on private land.”

The complex is comprised of four parcels totaling about 5,800 total acres with three separate farms, three ponding areas and public accommodations at the Bernardo farm.

Over a million pounds of crops such as corn, milo, alfalfa and winter wheat are grown each year on the farms to attract the birds. Workers leave crops standing in the fields and then cut them down in measured order to attract and feed the wildfowl.

The birds are adept at finding food and have learned to find the free and easy meals as well as secure overnight accommodations at the state’s three farms in the valley.

The state also helps coordinate with bird hunters by steering them to private farms in the area where waterfowl are causing damage.

The birds in turn learn to steer clear of the hunters and in many cases settle upon the state’s farms for safety, Gustin says.

“They can be moved as easily as cattle,” Gustin said of the waterfowl.

Visitors to the Bernardo farm will find a three-mile, auto-tour route that winds its way through the farm, three elevated viewing platforms, a clean toilet, and plenty of wildlife to view. Picnic tables are slated to be installed soon too.

During a recent visit, deer could be seen grazing among the many cranes, geese, ducks and other birds resting, feeding and flying about the farm’s fields.

“It’s pretty cool when the cranes arrive, “ says Larrame Hammer, 28, who works and lives at the farm with his wife, Samantha, and their two young children, Latisha and Larrado. “But I’ll be ready for them to go in about two months. They get up mighty early.”

During a tour of the farm Hammer points out the standing fields of corn and notes how the birds will follow the farm tractor when it gets to cutting.

“As soon as they hear that sound, they’ll come in,” he said.

Hammer is following in the footsteps of his father who also lived and worked at the farm when Larrame was a youngster.

“I lived here for about a year in the first grade,” he says. “My Dad grew up across the river in Veguita.”

His father, Fritz Hammer, would later transfer to the Game and Fish hatchery in Glenwood Springs and then to another wildfowl farm down in Artesia where Larrame grew up and met his wife.

“I was teaching a wildlife class for the FFA (Future Farmers of America) and she was in it,” he says with as broad smile.

Samantha said she likes living on the farm because it’s a good environment for their kids to grow up in.

“They can run around and I don’t have to worry about them too much,” she said. “We don’t have to deal with a lot of things people in town do.”

Hammer said he hopes to continue following in his father’s footsteps by replacing him when he retires from his job as Assistant Manager at the Seven Rivers Waterfowl Management area outside of Artesia.

“All of our family lives down there, so it would be nice,” he said.
Hammer and other workers have been working hard to get the new bird watching blinds in place in time for the Festival of the Cranes in mid-November, says Dave Wilson, Farm Manager.

The festival is in its 20th year of celebrating the return of the cranes with a wide variety of activities from Nov. 13 through the 18th including exhibits and demonstrations at the Bosque del Apache over the weekend. For more information go to Friends of the Bosque.

The farm at Bernardo will host an open house on Saturday, Nov. 17th with staff on hand to greet the public, Wilson said.

Workers are also slated in the upcoming weeks to install a series of interpretive signs at selected spots along walking trails at the Bernardo farm to provide visitors information including details about the wildfowl and wildlife in the area.
Mule deer, coyotes, raccoons, quail, pheasants, owls, hawks and a variety of songbirds are commonly found throughout the farmlands. 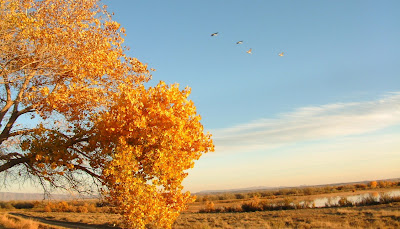 The farm at Bernardo is normally is open to public during routine business hours and there is no fee to enter and enjoy the scenery. For more info see the department’s website at Wildlife.

The Ladd S. Gordon waterfowl complex is named in memory of former director of the state Department of Game and Fish fromn1963 to 1975. He was a World War II Navy veteran who received a Bachelor of Science degree in biology from the University of New Mexico in 1949 before starting his career with Game and Fish. He worked his way up through the ranks serving as a patrolman, conservation officer, researcher, area supervisor, chief of law enforcement and information and education and finally director, according to information posted at larryjgordon.com.

Following his retirement, Gordon worked with the National Rifle Association and Ducks unlimited. Gordon is regarded as a leading conservationist for his time, according to a state Game and Fish brochure for the waterfowl complex.

If You Go: From Santa Fe head south on I-25 through Albuquerque past Belen towards Socorro. Get off at the Bernardo/Mountainair exit at US 60. Loop around and under the interstate and head back north of the frontage road, State Road 304, located on the east side of the freeway. Follow the signs to the Ladd S. Gordon Waterfowl complex. At the railroad tracks stop, look and listen for approaching trains and then cross over to the farm. About 120 miles one-way.