New Mexico’s prairie is wide-eyed country where the clouds loom as big as mountains and the grassland never seems to end.

And it’s out here hidden in a broad, deep canyon through which the Canadian River flows that one can find some of the peace and the solitude summer can bring.

“There’s nothing prettier than the plains when they green up,” says Nancy Walls, District Ranger for the Forest Service’s Kiowa and Rita Blanca national grasslands.

Walls proved to be right during a recent trip to the campground tucked deep in the heart of this red-rock-lined canyon with a pea-green ribbon of river running through it.

Recent showers have added an undertone of green to the sea of golden grass sweeping across the plains and afternoon thunderclouds can be seen draping wispy sheets of rain across the countryside.

The Mills Canyon Road turnoff can be found on N.M. 39 between Roy and Abbott, east of Wagon Mound. The well-maintained gravel road heads out across the plains for about seven miles until it reaches the rim of the well-hidden canyon.

Turning a corner, one begins to a 900-foot descent down a series of easy switchbacks, a few tight curves and a couple of slight dips in a three-mile-long road. A few ponderosa pines tower over the road while scrub oak, juniper and some piñon line the hillside.

The river glints far below in the evening light and one can make out great stands of cottonwood and juniper trees, wide pastures and the still standing rock walls of an abandoned building. 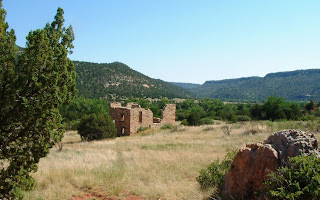 What nature has reclaimed and hidden is the once thriving, turn of the century agricultural empire operated by Melvin Mills, a shrewd businessman, district attorney and legislator whose mansion in Springer still stands.

Mills had consolidated family homestead holdings within the Canadian River canyon now named after him and created a progressive farming and ranching operation complete with a complex irrigation system, numerous fruit and nut orchards and solid stone buildings, according to published historical accounts.

Much of the bounty from Mills’ cattle and agricultural operations was hauled to nearby railroad depots in Springer and Wagon Mound to help supply the railroads’ Harvey House hotels.

Mills also built a hotel to service vacationers brought into the canyon by stagecoach and his operation thrived.

But in 1904 a massive flood brought on by unseasonably heavy rains roared through the canyon, wiping out his empire and burying much of it under several feet of silt and debris.

Mills never recovered and abandoned the canyon to help build the town of Mills back up on the plains. But despite his many successful business efforts, the man is said to have died penniless and dependent upon the generosity of others.

Meanwhile the town of Mills and the surrounding plains prospered as homesteaders flocked to the area and took up farming.

But once again nature and fate stepped in to put a halt to man’s best laid plans.

The Great Depression and the Dust Bowl conspired to drive many off the plains and all that remains of the town of Mills is a couple of old houses.

In the end, federal government was forced to step in to save this area of the prairies from any further losses.

The national grasslands are the remains of those efforts, four tracts of federally managed grasslands with two in New Mexico. About 78,000 acres around the Mills Canyon area and another 57,000 acres tract near Clayton.

Both are administered by the Forest Service’s Kiowa and Rita Blanca grasslands office in Clayton. For more information, visit Web site at the Cibola National Forest — Welcome! (www.fs.fed.us/r3/cibola/) or call 505-374-9652.

Down in Mills Canyon, visitors can explore the remains of a stone-built, two-story hotel, relax in the cool shade of the carved sandstone cliff walls or wander among remaining stands of orchard trees. 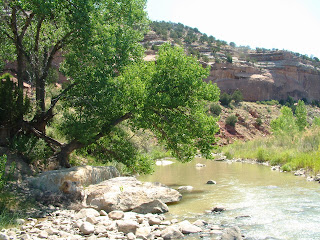 And the river is said to harbor a good population of catfish.

During the summer months visitors will find the temperature rises quickly, but with plenty of shade to be had one can ride out the afternoon comfortably with perhaps a quick dip in the river for added relief.

Free campsites are available and visitors should pack in plenty of water and ice, a spray bottle for swamp-cooler like relief, insect repellent and other essentials because of its remote location.

Be aware of the potential for encounters with snakes and other wildlife and take preventative measures to limit risks.

Visitors to Mills Canyon can find some services in the nearby town of Roy, a tidy, little town of about 300 that boasts a bank, bar, gas station, diners, antique store and a mercantile that’s up for sale.

The diner was open for lunch on Sunday and politely greeting the locals is encouraged.

New campground in the works for Mills Canyon

The Mills Canyon campground is scheduled to undergo some changes in the near future.

Construction is scheduled to begin any day now on a six-site campground on the rim of Mills Canyon near the access road, said Nancy Walls, district ranger for the Kiowa and Rita Blanca National Grasslands.

The rim campground will feature a new outhouse and pull through sites to accommodate recreational vehicles and horse trailers.

Each site will feature a picnic table, fire ring and grate and a tent pad. There will be three holding pens for horses and a nearby rainwater runoff stock pond for watering animals.

No drinking water, electricity or dump services will be available.

Camping is free and the new campground is expected to be completed by the end of August.

Work will proceed sometime in September on the road leading down into the canyon to include replacement of a wooden bridge.

Despite improvements, the road will still be classified as unsuitable for travel by RVs and trailers, which is one reason why the new rim campground is being built, Walls said.

The road will be closed for an estimated 30 days and those planning a trip to the canyon should call ahead to the Forest Service’s Kiowa and Rita Blanca grasslands office in Clayton at 505-374-9652 for specific dates, Walls said. Also visit the Cibola National Forest — Welcome! Web site (www.fs.fed.us/r3/cibola/) for more information.

Once the roadwork is completed crews in October and November are slated to begin work on the Mills Canyon campground at the base of the canyon, Walls said.

Campsites will be moved farther back from the river’s edge and four more sites will be added to expand the entire campground from eight to 12 with plenty of room between sites, Walls said.

New fire rings, picnic tables and other amenities including an outhouse and handicap access will be installed, Walls said.

Once again no water, electricity or dump services will be available. Camping is free.

An interpretive display will also be constructed at the site of the Mills ranch headquarters and hotel site, Walls said.

Despite the improvements, the area will retain its rustic and primitive nature, Walls said.

From Santa Fe head northeast on I-25 to Wagon Mound. Turn east on N.M. 120 to Roy and then turn north on N.M. 39 toward Abbott. About 10 miles out of Roy turn west on Mills Canyon Road, follow to the canyon rim and head on down. About a 300-mile roundtrip from Santa Fe.
Primitive camping sites available at Mills Canyon and at large within the grasslands. Last chance for gas and supplies at Roy.

Also see this article as it appeared in the Santa Fe New Mexican.