Tucked away in the Santa Fe National Forest’s Jemez Ranger District canyon off State Road 290 above the village of Ponderosa the group shelter and adjacent family campground have been closed for remodeling for the last four years.

But with construction and final inspections recently completed, the campsite and group shelter will be now available for the next camping season.

“It was heavily used before for weddings, family reunions, by moon worshippers, all sorts of groups,” said Joan Hellen, landscape architect for the Santa Fe National Forest. “It should be even more popular now with all the improvements.”

Hellen, designer of the project, said the renovation work has provided improved vehicle access, brought in new site and unit amenities and meet accessibility guidelines without compromising the character of the landscape.

The group shelter and campground now has a large covered pavilion with an oversized grill and a serving table. Trails from the surrounding campsites to the pavilion helps minimize the need for vehicular traffic within the area. 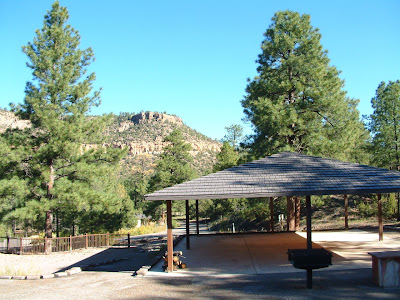 There are 16 campsites surrounding the pavilion in an area called “Owl Loop”, five of which are double sites which can accommodate up to two vehicles and feature two picnic tables per site.

“And the views to the red cliffs here are amazing,” Hellen added.

The group campground sits atop a hill with views of the Jemez Valley below and was originally a depression-era Civilian Conservation Corps base camp, Hellen said.
The renovation replaced the site’s vintage Forest Service wooden, pit toilets and picnic tables with newer, better units. Each site also features a metal post with arms from which lanterns and other items can be hung.

“They’re there to keep people from hammering nails into the trees to hang things,” Helen said.

Work at the adjacent Family Campground just up Forest Road 10 from the group shelter and campgrounds retained and reinforced three, rustic, CCC built rock and timber, three-sided shelters while also increasing the number and size of campsites and maintaining walk-in sites across Vallecitos creek.

Water will be supplied to the Paliza group and family campgrounds but there are no electricity or sewer hookups available. 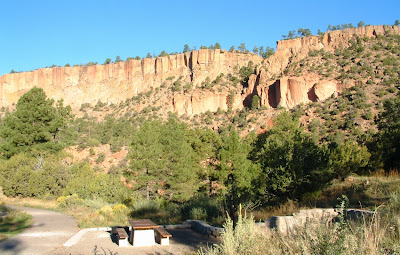 A “host” site with its own shelter including water, electricity and sewer line vault has also been installed at the family campground and the District is looking for someone to staff it next year, said Derek Padilla, Acting Recreational Staff Officer for the Jemez Ranger District in Jemez Springs.

Anyone interested in serving as the volunteer host at the newly renovated family campground can contact him at the office at (505) 829-3535.

Hosts live rent-free, on-site in exchange for performing routine maintenance and other tasks related to the campground’s operation such as assisting guests.

“We’re looking for folks with good people skills,” he said.

Half the sites at the Family Campground will be available for reservations online while the group shelter can be had in its entirety or can be split up to accommodate up to two groups at a time with one group using the pavilion and the upper “Owl Loop” campsites while another group can use just the lower “Red Tail Loop” walk-in, tent sites.

Padilla said recreational activities in the Paliza Canyon area of the Jemez Mountains include sightseeing. He said the views of the Valles Caldera and the Sandia Mountains that can be found from Cerro Pelado are striking on a good day. The mountaintop lookout can be found by taking Forest Road 10 north out of the campground and then heading east on Forest Road 270.

Those who are more adventuresome and equipped with a high-clearance, four wheel drive vehicle can find another strikingly, scenic overlook by taking Forest Road 266 north out of the campground and heading southeast to above the Tent Rocks National Monument near Cochiti Pueblo.

Visitors to the campgrounds can also stop at the nearby village of Ponderosa and visit the local bar and for beer, ice and inquire of the proprietor about the village’s legendary blond haired, blue eyed descendants of early Spanish settlers.
Visitors to the village can also sample locally produced wines at the Ponderosa Valley Vineyard & Winery where Shannon Grenier says she’s looking forward to the reopening of the group shelter and campgrounds.

“It’s a little piece of paradise up there,” she says. “And we have so many people looking for camping in the fall and early winter because of our warmer weather here. There’s the balloon-a-tics, the cyclists, you wouldn’t believe how many people are on vacation this time of year. It’ll be great for business when they finally open that back up.”

Hellen and Padilla said the family campground couldn’t be utilized this fall due to a lack of a campground host, a finished water system and ongoing road construction.
A number of issues contributed to the project’s lengthy construction process, Hellen said, including a two-phase bidding, award and construction process required by budgetary limitations. And construction crews who typically work during the summer season lost several months of work due to administrative delays.

But now that the work is finally done and the campgrounds are slated to come back online in the spring, Hellen expects campers to find their way into Paliza Canyon for a quiet, scenic and memorable stay.

The Jemez Ranger District’s next project will involve renovating the San Antonio campgrounds near the village of La Cueva on the road to Fenton Lake, Hellen said.

Editor’s Note: Karl Moffatt and Wren Propp had to obtain a special use permit from the USDA Forest Service to use the Paliza Group Campground for their scheduled September, 29, 2007 wedding. The campground was completed but still closed at the time. Special thanks to then Acting Jemez Ranger District Ranger, Mary Bean, for her approval of the permit and NM Rep. Tom Udall and Sen. Pete Domenici for their assistance in navigating the process. 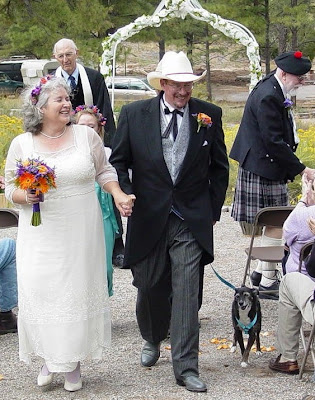 From Santa Fe head north on US84/285 to Pojoaque and take State Road 502 to White Rock and then follow State Road 4 up the mountains and past the Valle Caldera and down through Jemez Springs, continue by the Walatowa Visitors Center and then turn onto State 290 to Ponderosa and follow Forest Road 10 to the campgrounds. About 90 miles. An alternative route involves heading south on I-25 to Bernalillo and taking State Road 550 west to the State Road 4 turnoff at San Ysidro, passing through Jemez Pueblo and turning at State Road 290 to Ponderosa and Forest Road 10 to the campgrounds. About 80 miles.