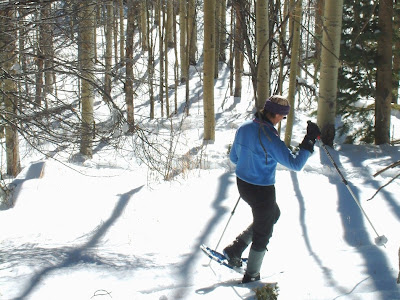 High up in the mountains above Santa Fe where the air is crisp and the sun shines brilliantly during a lull between storms, professional hiking guide Karen Denison points out the faint tracks of a snowshoe hare atop the deep snow.

“Looks like a dog’s tracks there too, the way they’re going crazy all over the place,” she says.

I imagine a big, goofy lab out for a romp in the snow, its legs all going in different directions as it chases the rabbit’s scent.

Like the hare, a hiker in snowshoes can easily glide across the snow, venturing deep into woods on a beautiful winter’s day.

Denison, who has dedicated herself to teaching women and others how to enjoy the outdoors, says the key to good snowshoeing is getting out there!

Beginners can rent snowshoes and ski poles at any number of the local ski shops and head up Hyde Park Road to Black Canyon Campground or Aspen Vista Road for an easy introduction to the sport.

“It’s fun and unlike skiing, you can get out into the woods where you’ll see all sorts of wildlife tracks in the snow,” Denison says. “You can really get some notion of how many critters there really are out there.”

Denison stresses that snowshoeing is an active endeavor and hikers need to dress accordingly, in layers that can be put on and taken off as conditions dictate.

Hikers should use wicking underwear made of polypropylene, silk or wool to pull sweat away from the skin to ward off chills. The next layer should consist of a warm layer such as fleece, wool or other insulating material and lastly, a nylon or breathable material shell to ward off wind and moisture.

Footwear should consist of stout, waterproof boots, such as snow-paks or hunting boots worn with thick fleece or wool socks and waterproof gaiters to keep the cold and wet snow in check.

Top your outfit off with a suitable hat, something that can warm the ears and keep the sun and other elements out of the eyes. Also bring a warm, waterproof pair of gloves.

Denison also highly recommends using sunscreen and sunglasses to protect from being burned or blinded by the sun’s intense glare coming off the snow.

Lastly, Denison stresses the need to stay hydrated while out hiking as dehydration can contribute to the deadly condition, hypothermia.

“In the winter it’s something you have remind yourself to do because all the usual clues might not be present,” she said.

Dension said one of her scariest outdoor incidents was when she and her husband were cross-country skiing to a backcountry yurt in the mountains above Chama when they got caught in a snowstorm. Her husband, Terry Taddeucci, a nuclear physicist at Los Alamos National Lab, was doing the hard work of breaking trail when he began to exhibit signs of hypothermia.

“I knew something was wrong with him because he was actually listening to me for a change,” Denison said.

Blinded by the snow but armed with a GPS (Global Positioning System) device they managed to find their shelter and safety before things got too serious.

“But he was dehydrated and wiped out for the whole next day,” she said.

Those interested in learning more about the joys of snowshoeing and winter hiking can enroll in Denison’s continuing education class at Santa Fe Community College in mid-February. 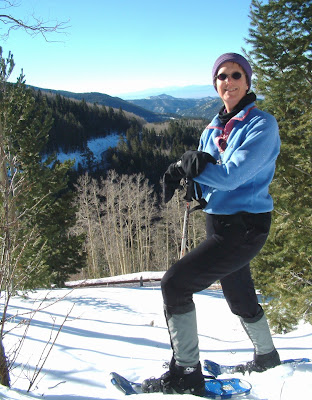 Karen Denison of Outspire guided hiking tours takes a break while snowshoeing on a hilltop high above Santa Fe during the winter of 2007.

And that’s what Denison can usually be found doing when she’s not guiding clients on day hikes around Santa Fe, teaching others about the outdoors and its many recreational opportunities.

Denison’s own introduction to the outdoors began while growing up in Dover, Ohio, where she learned to fish with bait and spinners as a youth.

She then came out west when her husband was offered a job on the hill.

Then one afternoon while fishing on the Conjeos River in Southern Colorado she found herself in the middle of a great insect hatch and her life took a turn.

“There were all these fish rising and all I had was my spinning rod with a Wooley Worm on a bubble and of course I wasn’t catching anything,” she said. “I was so mad and then I realized that this was the water for which flyfishing was made.”

Wanting to learn more about flyfishing she enrolled in a flyfishing class at the Santa Fe Community College taught by the owner of the High Desert Angler High flyshop, Jan Crawford.

Crawford was one of the founding members of the women’s flyfishing group She Fishes! and a leader in the female, flyfishing movement in New Mexico. The two became good friends.

“She slowly dragged me out of the science field and into the flyshop,” said Denison who became a fishing guide under Crawford and with eventually co-authored the book “Fly Patterns of Northern New Mexico” along with former High Desert Angler shop manager, Bill Orr. (See related blog article about Mr. Orr at Flyfishing 101- A how to Guide.)

Crawford and Denison worked together for many years until Crawford decided to sell the shop to a younger crew and move up to Creede, Colo.

The two still work together however, hosting and teaching a women’s flyfishing school and retreat at the 4UR Ranch during the summer.

It’s a great opportunity for like minded women to get together on the water, learn the sport and share each others company, Dension said.

For more details about this event check out the link at www.outspire.com .

Denison also remains involved in the local flyfishing scene through her work at The Reel Life flyshop in Sanbusco Market in downtown Santa Fe where she teaches flycasting, flytying and introductory flyfishing.

For more details about what this Santa Fe flyshop has to offer check them out at www.reellifesantafe.com .

And as if that’s not enough to keep her busy, Denison has devoted her time for the last 10 years to teaching women how to use GPS navigation through the state Department of Game and Fish sponsored “Becoming an Outdoor Woman” program.

The program is held every year at the NRA’s Whittington Center near Raton and offers classes such as basic firearms instruction, first aid, flyfishing and tying, camp skills and outdoor cooking, big game field dressing, geology, wildlife and plant identification, tracking and sign cutting and other outdoors skills.

For more info about this program go to www.bownewmexico.

Denison said she loves being an outdoors guide, sharing her knowledge and experience with others and hopes more women will follow her lead and get out there!