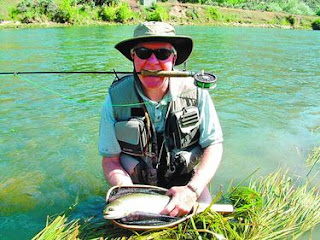 Tim McCarty, 56, of Albuquerque shows off a trout caught in the renovated area below Simon Canyon during a recent fishing trip.

Anglers looking for some good fishing and a little breathing room on New Mexico’s popular San Juan River need only look downstream to a stretch of recently improved trout habitat.

“Looks like money well spent,” said Tim McCarthy, 56, of Albuquerque, as he released a good-sized rainbow trout caught in the project area during a recent fishing trip. “It’s nice and fishy down here.”

That’s the response state and federal officials were hoping for when they finished the second stage of the three-phase project designed to entice fish and anglers to the lower reaches of the state’s premier trout stream.

Over the last two winters about 500 tons of strategically placed boulders have been installed in a three-quarter-of-a-mile stretch of previously barren and featureless water below Simon Canyon and just above the area known as The Gravel Pit.

The rock work will help directs water to the center of the river where it will create a deeper channel which will carry off sediment and provide trout with good cover. Boulders placed in the channel itself will churn up the water to add oxygen and provide protective areas where fish can hold, said Marc Wethington, state Game and Fish biologist for the San Juan River.

And the work is apparently beginning to pay off.

“We had hoped to see some results this fishing season,” Wethington said. “It should get even better with time.”

Wethington said too many anglers crowd into the Texas Hole area below Navajo Dam and neglect to use the rest of the estimated 4.25 miles of public access to the river.

“We wanted to relieve some of that congestion, spread out the anglers and make fishing here more enjoyable for everyone,” Wethington said.

A plan was hatched — spurred, in part, after offers from private energy firms operating in the area to contribute to such projects, Wethington said.

“We like to fish down there, too,” said Steve Zink, a production supervisor for Devon Energy which employs 32 people and operates about 500 oil and gas wells in the Navajo Dam area. “This is just Devon’s part in giving something back to the community, and the fish, too.”

Public agencies such as Game and Fish, the Bureau of Land Management, the Bureau of Reclamation, the Army Corp of Engineers and Navajo Lake State Park worked together on the project along with the San Juan Fly Fishing Federation and several energy firms including Devon Energy, Williams and ConocoPhillips. Adobe Construction of Bloomfield provided the heavy lifting for the job.

Wethington said his peer at the BLM, wildlife biologist John Hansen, was instrumental in the project, particularly in securing the use of federal Sikes Act funds to get the project off the ground.

Those who hunt, fish or trap on public lands pay an additional $5 for a Sikes Act “habitat stamp” when they purchase a license.

Those funds are typically used on projects such as providing water for wildlife through the installation of wells, rain- catchment systems and holding tanks or earthen ponds. Sikes funds might also be used for range management or wildlife reintroduction programs, Hansen said.

“But this is one of those cases where you can actually see that Sikes Act money put to work,” Hansen said. “It’s been one of the best projects I’ve worked on in my career considering how well everyone came together, the results and the public response.”

Fishing guides who ply the San Juan’s waters welcomed the project that aimed to improve conditions on the last stretch of water that many drift boats pass through before they reach the Gravel Pit takeout.

“This gives us a place to fish that we didn’t have before,” said Greg Faught of the Float and Fish fly shop and guide service of Navajo Dam. “During high water, it’ll do wonders to move sand and silt out of there. I give it a big thumbs-up.”

During high water season on the San Juan River, water flows from the dam are increased from 500 to 5,000 cubic-feet-per-second, or cfs, for several weeks to mimic spring runoff and deliver water downstream.

The higher flows serve to clear the riverbed of silt and sand as well as other debris that has built up during the year and can smother insect production, the primary food source for trout.

The high-water season ended the last week of May, and water has since scoured deep holes behind the boulders installed in the project area which will not give trout a new place to live.

It also moved out plenty of built-up sand and sediment which should improve the insect population in that area, Faught said.

“I think this is going to be great wading and dry-fly water,” Faught said.

Anglers wanting to test these waters should consider fishing the area in the mornings and early afternoons before the drift boats start coming through, Faught said.

Boulders had to be trucked in about 50 miles from a quarry near Ignacio, Colo., with each weighing an estimated 11/2 to 2 tons and “about as big and round as the hood of a pickup,” Wethington said.

Heavy equipment couldn’t be driven along the riverbanks due to environmental restrictions, so workers had the water flow lowered to 250 cfs and brought in a high-clearance, all-wheel-drive dump truck to haul the boulders upstream through the river itself. A tractor, with a movable arm fitted with a pincher claw, worked out of the riverbed, picking up and positioning the boulders.

The project area represents the last mile of the San Juan’s quality waters which are home to an estimated 75,000 trout.

The first quarter-mile of the river is strictly catch and release, and the remaining four miles have a bag limit of one trout over 20 inches with the angler required to stop fishing once they have taken a fish that day. Single, barbless lures are required on the quality waters.

Below the quality waters, anglers can use bait, and the normal bag limit is in effect

The third and final phase of the project will target the Cottonwood Campground area in the bait water section of the river.

The design is expected to be functional as well as aesthetically pleasing as the state park campground serves as a highly visible centerpiece for the entire Navajo Lake State Park which encompasses the quality waters of the San Juan River.

The third phase will make use of downed cottonwood trees to provide structure as well as more boulders and excavations which will create suitable habitat for holding fish as well as reduce silt and sediment buildup.

Fish-holding areas created by the structure work will be particularly useful in this part of the river as it is regularly stocked with up to 60,000, 9- to 12-inch trout for anglers to catch and eat.

The fish habitat project has cost about $85,000 to date. According to Wethington, anglers spend about 250,000 hours a year fishing on San Juan River below Navajo Dam and contribute an estimated $20 million to $30 million to the state’s economy every year.