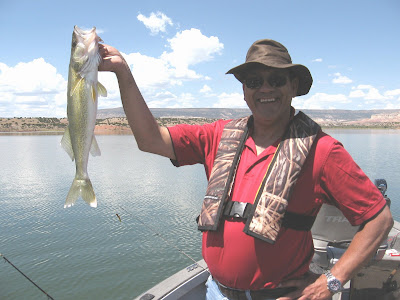 Ray Rael of Santa Fe shows off a Walleye he plucked from the depths of well stocked Abiquiu Lake.

Abiquiu Lake is brimming with snow runoff this year and the fishing couldn’t be better for walleye, smallmouth bass and catfish.

Located about 33 miles north of Espanola on US 84, the lake is operated by the US Army Corps of Engineers and features a fine boatramp and a nice campground situated on a bluff overlooking the lake.

Anglers looking for action will find plenty to be had since the lake has filled to well above average due to a wet 2007/2008 winter.

During a recent late August trip we found brown and black speckled, 3&1/2 inch Gitzit’s worked well for smallmouth bass when cast to the bank and retrieved slowly with an occasional jigging motion.

Raek picked up a fat smallmouth working the water around island points and submerged structure. 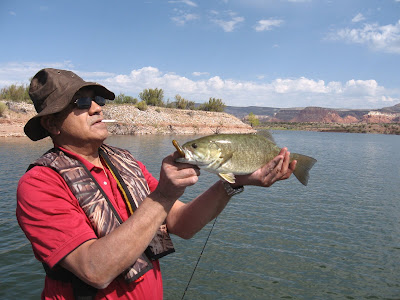 Ray Rael of Santa Fe inspects a nice sized smallmouth he caught and released at Abiqui Lake during a recent trip.

Abiquiu lake offers more than just fishing with big, pillowy clouds floating lazily over the towering, red faced cliffs that inspired renowned painter Georgia O’Keeffe who kept a studio in the nearby village of Abiquiu. 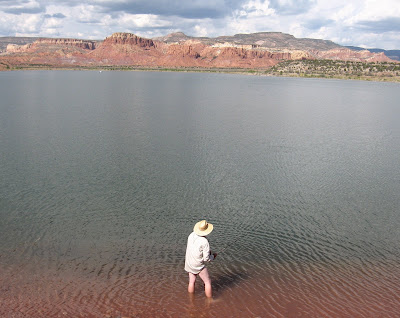 The author gets “down and dirty” while fishing at scenic Abiqui Lake recently.

Fishing from the bank of one of the lake’s islands produced good results with white Gitzits featuring black backs that look much like a minnow. On retrieval many fish chased the lure right up to the bank including one big walleye. 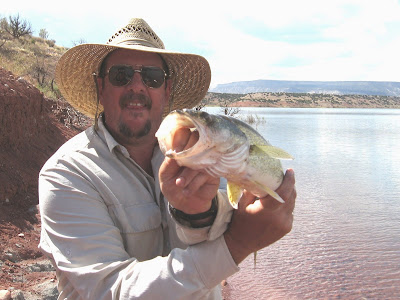 Walleyes sport a nasty set of teeth and handling them requires a firm grip through the back of the gill.

Out in deeper water we capitalized on the walleye’s predatory instincts by casting and retrieving deep diver minnows, those ones with the fat, downturned, clear plastic lips that force the lure to dive and giggle.

On retrieval these lures elicted powerful strikes from these aggressive fish. 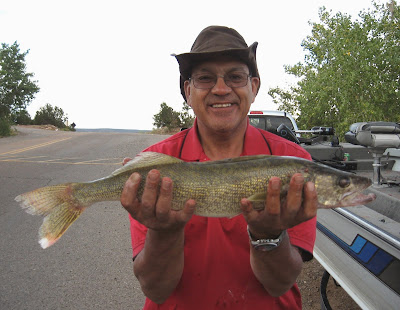 Ray Rael shows off his dinner after a sucessful day on the water at Abiqui Lake in Augsut 2008.

By day’s end we had kept two nice sized walleyes, a 20 and a 22-incher, for eating later. Only those walleyes 14-inches or bigger may be kept under fish and game regulations.

Filleted and cut into fat chunks, dipped in Luzianne, Cajun/Creole, seafood coating and then fried in a baby deep fat fryer, the walleye produces a great meal.