African Fly Tier Delivers – You Can Too ! 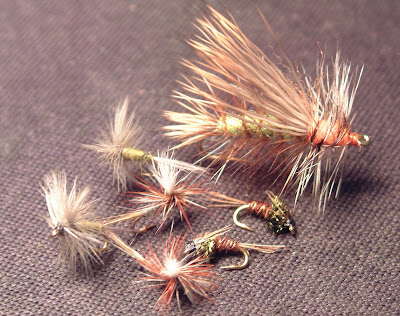 In the glow of the campfire after a long day of fishing I got to telling my old friend Glenn May about the African fly tier who contacted me through my outdoors blog.

A lady named Elizabeth Mbugua of Narobi, Kenya had sent me an email, offering a sales pitch for custom order flies.

The lady must have been searching the web for flyfishing related sites and came across mine.

Amazing how the web has opened up the world.

So I wrote her back and asked for some samples which soon arrived in the mail and looked and worked just fine.

But I was still skeptical, thinking it might be some kind of internet scam, so I asked May, who had just returned from a two year stint in Africa with the Peace Corps, what he thought about it.

He suggested it was probably okay and if I really wanted to have an immediate, profound and positive impact on someone’s life, then I just might want to buy some flies from her.

“You have no idea what that kind of money means to those people,” May said.

And it would be like my own individual, foreign aid program with no political strings attached, I thought.

So I put in an order for a bunch of flies that I hardly ever tackle on my own vise, like some of those pesky, little #22 parachute Adams and some of those #20 blue wing olives that I can never seem to find in the flyshops.

And I needed a bunch of pheasant tail nymphs in size 18 and 20 too, plus I wanted some stimulators since I seem to use so many of them over the summer.

In the end I ordered 10 dozen flies at $4 a dozen and they arrived in the mail in no time at all. She asked for payment by Western Union money order.

The work was nicely done and Mrs. Mbugua says she can also do custom orders for those who send in their own designs or have samples of flies they want tied.

I also asked her some questions about herself and how she got into this business.

Seems Mbugua was once a tour guide in her home country and some Americans suggested the idea to her, she says.

And no, she’s never seen a trout in her life but she’d love to visit American some day and see what this flyfishing sport is all about.

But for now she’s more concerned with feeding and educating her three children since the economy there has been suffering recently due to political turmoil.

Yeah, tell me about it girl.

And since May assured me that any money I send over there will go a long way to helping Mrs. Mbugua and her family and I can now claim my fishing is fufilling an even greater purpose. 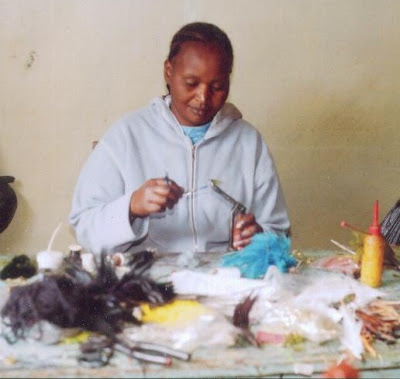 So anyone out there interested in doing business with Mrs. Mbugua can contact her by email at kanguisec@yahoo.co.uk.

Mention my name and website, www.outdoorsnewmexico.com, so she knows her marketing efforts have paid off.

And please note that due to language differences, some nuances we take for granted may be lost in translation, so be patient, keep it simple and spread the wealth around.

Posted under Uncategorized
Comments Off on African Fly Tier Delivers – You Can Too !