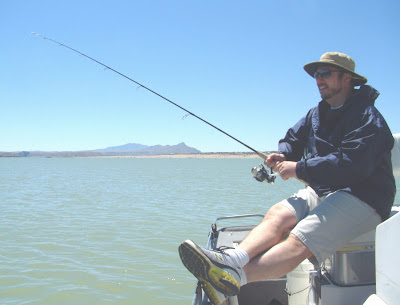 Elephant Butte Lake is back on the rise due to above average snow pack this winter and water sports enthusiasts should be a whole lot happier because of it.

“They’re going to have a fun time at the Butte this summer,” says Wayne Treers, hydraulic engineer for the federal Bureau of Reclamation in El Paso. “Recreational opportunities should be a whole lot better this year.”

Spring runoff accounts for about 70 percent of the reservoir’s annual storage and is flowing at about 170 percent of normal right now, Treers says.

The “Butte” hasn’t seen flows like that in ten years and has suffered through an extended drought in recent years which reduced its water supply to a low of 4 percent of its 2 million acre foot storage capacity in 2004.

But this year’s high spring runoff is expected to boost storage back up to about 40 percent of capacity which is about normal based on long-term averages, Treers says.

Treers says the lake should gain about 22 feet of elevation where it’s measured at the dam and see its surface area expand from about 13,000 acres to more than 18,000 acres.

And that means a lot more water to play in for those who boat, fish, swim and camp at the popular desert lake located about 200 miles south of Santa Fe.

“It’s time to come down and play,” says longtime Elephant Butte fishing guide Jr. McManus. “We should have a real good spawn this year and the fish will have plenty of cover to hide in.”

Lakeside areas exposed by low water conditions have sprouted plenty of vegetation over the last few years which will provide great hiding spots for bass when the lake rises again.

That’s good news for those who want to get in on some of the action from the bank says McManus, 60, who operates Desert Bass guide service, is a frequent bass tournament participant and is also an exclusive sponsor of Eagle Claw fishing tackle.

McManus says fishing is already good at the lake this spring and he offers a few tips for those who want to visit before the crowds and the heat settle in.

First, stay abreast of published fishing reports from the lake to determine if, where and when the fish are biting, he notes.

Water temperatures below 55 degrees will limit fish activity so avoid fishing on cool, windy days or when a cold front is moving through, he says.

When you do catch a nice day, try fishing shallower areas that heat up quickly and those with cover such as submerged trees and shrubs that bass like to hide in. 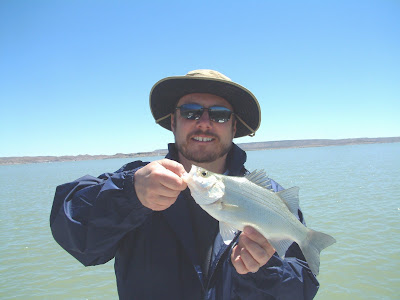 McManus says anyone with a fishing rod can hook up with plenty of bass using live bait like minnows and worms.

“They’re the best baits,” he says.

McManus says a typical bait rig can be tied to a 10-lb test line with a weight on the bottom to take it down and the bait dangling off the line about 18-inches up from that.

Let the bait sit and maybe twitch it every once in a while to generate some interest. Try different areas and watch the rod tip for action.

But spinners and crank baits also work well in bringing in the bass too, he says.
Cast crank baits and spinners into promising areas and retrieve at a moderate speed, stopping every so often or changing speed to attract attention.

McManus urges anglers to practice catch and release fishing at the Butte so others may also enjoy the angling experience.

Never handle a fish with dry hands as it can strip them of their protective coating. Support fish by the jaw and belly while gently removing hooks. Beware of the fishes’ spines on the back and near the gills as these can inflict painful stab wounds.Return fish to the water as quickly as possible.

McManus says he expects bass fishing at Elephant Butte to be whole lot better in the very near future due to the addition of a new, warm water fish-rearing facility at the state Department of Game and Fish’s Santa Rose fish hatchery.

The first-of-its-kind facility will produce bass and other warm water sporting fish for transplant into the state’s warm water fisheries such as Elephant Butte.

McManus said he had a chance last year to lobby Gov. Bill Richardson for the facility while taking him fishing during videotaping of a Wild New Mexico television show on the lake. 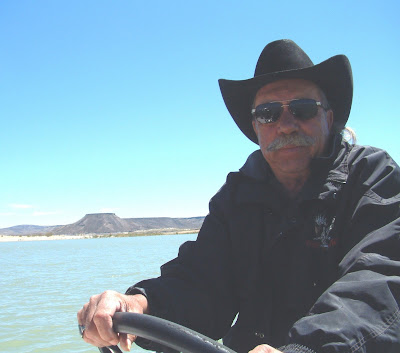 McManus subsequently was invited to attend the ground breaking of the facility this spring and he is proud to display his gold painted shovel at his family restaurant, Casa Taco, in Elephant Butte.

McManus says previous state stocking efforts at Elephant Butte typically involved small fry that have a much lower survival rate than the larger 2- to 5-inch juveniles expected to be produced at the new warm water hatchery.

McManus said he expects the larger hatchery fish to really increase the lake’s bass population and its draw as a premier, bass fishing tournament site.

“From an economic standpoint, we can’t lose,” he says.

In the meantime, those seeking to get in some time on the beach need only head south to the Butte this spring where camping is allowed along much of the lake’s shoreline, says Phillip Rael of Elephant Butte Lake State Park which oversees most of the accessible areas of the lake’s western shoreline.

Visitors heading south to the lake can jump off Interstate 25 at exit 89, the Cuchillo, Monticello and Chloride turnoff, for a more scenic tour of the lake. Cross over the highway and head east down through the canyon towards the lake.

“Because when the water went down, so did the business,” he says. “Before, this is where the fishermen used to be, they preferred it.”

Akana sells bait, tackle, gas and groceries at his RV park office and will be happy to see the anglers return with the rising lake.

This upper end of Elephant Butte Lake State Park features a new campground and boat launch and is preferred by those seeking a quieter stay than one may find closer to town, park officials say.

The road into town is called Rock Canyon Road and runs by numerous other turnoffs with names like Three Sisters, Club Cove and Lost Canyon that all lead down to the water’s edge.

These sites are remote and offer primitive camping for those seeking solitude among the dunes. Campfires are allowed within 125 feet of waters edge.New outhouses are provided throughout the areas and camping costs $8 a night. Field collection is $25 plus the camping fee if one is caught freeloading.

Visitors should be aware of the sandy conditions in these remote areas and drive accordingly. Four-wheel drive is recommended and stopping once you’ve gotten going isn’t.

Elephant Butte sees close to a million guests a year including crowds topping 100,000 over the three major summer time holidays. Weekdays during the spring and early summer are generally uncrowded.

Take I-25 south through Albuquerque and Socorro to the Elephant Butte turnoffs just north of Truth or Consequences. About 400-mile roundtrip from Santa Fe. Camping available at numerous locations along the lake. Typical services available in Elephant Butte. A full service grocery store is located in nearby Truth or Consequences along with hot springs, hippies and some very cool architecture.

Posted under Uncategorized
Comments Off on Discover Elephant Butte Again