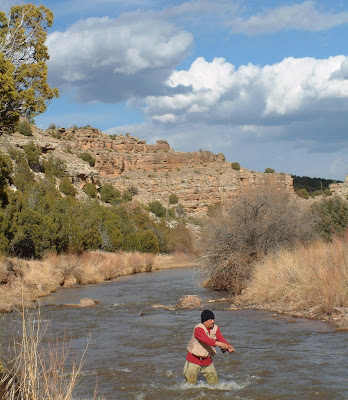 Glenn Jaramillo,42, of Santa Fe enjoys a beautiful day off from work to flyfish the murky waters of the Peco River below Villa Nueva State Park on Monday, March 10, 2008.

Now is a good time for anglers to get in some early season fishing before the snowpack melts, sending torrents of high, muddy water downstream.

“Every spring there’s this window of opportunity, “ says Jerry Burton, a fishing guide for the Reel Life Fly Shop in Santa Fe.

Longer, warmer days bring out the trout and opportunistic anglers can find some good fishing on area streams by following a few tips, Burton says.

Do your homework by paying close attention to New Mexico’s stream flows found on the US Geological Service website at http://nm.water.usgs.gov/.

Anything below 150 cubic-feet-per-second (CFS) of water flow is probably going to be fine to fish, he says.

Watch the peak high and low water flow pattern to determine the best time of day to fish. This time of year it’s usually from 10 a.m. to about 3 p.m. on a stream like the Jemez, Burton says.

Don’t be put off by off-color water, but instead use it to your advantage to get closer to your work without spooking a fish.

Fish an area methodically and use high visibility patterns like a prince nymph with a gold bead head or a black woolly bugger laced with crystal flash.

Work along the edge of currents, up close to the banks and in spots where trout may be resting and the current brings food to them.

“They’re not going to waste a lot of energy chasing stuff,” he says. “So you have to get it right on top of them.”

Also, fish open areas exposed to the sun, as trout will be more active in these warmer areas, he adds.

Those fishing with bait such as worms and salmon eggs have an added advantage when fishing murky water as trout rely more on their powerful sense of smell to detect food under those conditions.

“There’s a reason you always see a picture of some kid in the newspaper who’s caught a big brown on a worm,” he says. “It’s the smell.”

Burtons suggests the Pecos River and Jemez Mountain streams could provide good fishing before the runoff gets to roaring.

And when that happens, Burton suggests heading south into the Gila for some prime fishing.

Runoff in the Gila is generally over by late March and early April providing anglers numerous opportunities to fish for rainbow, brown, brook and some Gila trout, Burton says.

And those lucky enough to catch a Gila trout have Burton to thank.

Burton, 67, is a retired US Fish and Wildlife Service (USFWS) biologist whose work in New Mexico included the Gila trout recovery and restoration project.

The native trout was listed as endangered back in the mid-1960s. Fishing for it was prohibited and a long running and exhaustive project was undertaken to bring it back from the edge of extinction.

The effort resulted in a prospering Gila trout population which allowed the USFWS to down list the trout from endangered to threatened.

And it was Burton, by then retired, who filed the petition to down list the trout.

“You know, at what point do you say they’re past the level of needing that level of protection?” Burton says. “We met all the criteria set in the recovery plan so someone had to say ‘we’re finished here.’”

And that someone was Burton because no one else seemed to be willing to step up to the table and make that effort.

“A lot of people were worried about their job security,” he says.

But Burton, a life-long angler and hunter, and plenty of others in the state wanted to have the opportunity to fish for the native trout once again.

And when that happened it would validate all the work he and so many others put into saving the native trout, he said.

So it was he who petitioned his former employers in 1997 to down list the trout.

The State Game Commission has since opened three streams containing pure strain Gila trout to fishing and many other streams in the Gila Wilderness are being stocked with Gila trout, which are raised in a federal fish hatchery in Mora.

Burton says the Gila Wilderness and National Forest provides great, early season fishing for those willing to head south. Check the state Department of Game and Fish and Gila National Forest websites for more information on where and when. 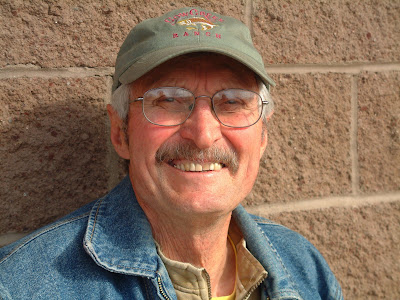 Jerry Burton Winter 2008Burton was born and raised in Oshkosh, Wis., one of six kids. His mother, Helen, was a homemaker and his father, Joe, was a machinist at the nearby North American Rockwell Plant that produced farm machinery.

He grew up riding his bike down to the Fox River or nearby Winnebago Lake where he’d fish for walleye, perch and anything else he could catch. He took up duck and deer hunting as he grew older.

Burton said his dad was a Depression era survivor who stressed his children’s need for good jobs skills, so Burton took industrial arts classes, like machine shop, while in high school.

Burton was preparing for a career like his dad’s in manufacturing until he took the college entrance exams and discovered he was good at academics too. He was accepted at the University of Wisconsin in Oshkosh and graduated with a bachelor of science in biology.

During college he married his longtime sweetheart, Sue DeYoung, and worked second shift as a machinist at his dad’s factory. The couple lives in Albuquerque, as do their two children, David and Stephanie.

Burton said he went into biology because of his love of the outdoors and while in college a guidance counselor noted the USFW was hiring and suggested he apply. He did and that’s how he got his start with the federal agency.

Burton said in his 28 years with the service, he is most fond of his days working in North Carolina where he assisted the Eastern Band of the Cherokee Nation in developing a self-supporting, recreational, hunting, fishing and camping program.

The Indians possessed over 30 miles of prime trout streams, which were stocked with up to a ton of fish a week with close to 90 percent of those being taken by anglers, Burton says.

“Boy, we sure sold a lot of niblets corn down there,” he says with a laugh.

Burton says he discovered the stocking program had no ill effect upon the native trout, as they seemed to only eat corn on the drift rather than those suspended upon a hook.

Burton noted that the Cherokee reservation bordered the scenic Great Smokey Mountain National Park and Blue Ridge Parkway, which made for excellent working conditions.
“Those were six, great years,” he said.

Burton says he would later use skills he learned assisting the Cherokees when he was transferred to the state of Washington where he worked with local tribes on salmon and steelhead trout issues.

And it was in the late stages of his career — as the Endangered Species Act became law –that he was transferred to New Mexico to specialize in that area of work.

Burton remains active with local conservation groups such as New Mexico Trout and the Truchas Chapter of Trout Unlimited and frequently speaks before these groups.