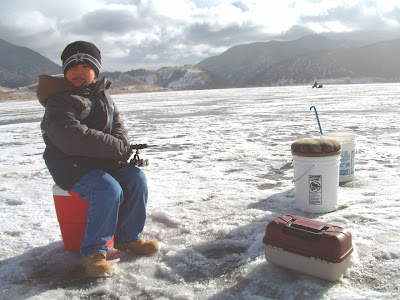 Adam Vigil, 7, of Taos waits patiently for a bite while ice fishing with his family at Eagle Nest Lake on Saturday, Jan.5, 2008.

Despite the howling wind, bone-numbing cold and threatening weather, plenty of hardy anglers fanned out across the frozen expanse of Eagle Nest Lake this past weekend to hunker over a hole and try their luck at ice fishing.

“This is what it’s all about, man!” said John Gonzales, 43, a Taos plumber, as he pulled a pan-sized trout through a small hole drilled in the ice.

Nearby brothers, Adam Vigil, 7, and Ryan Vigil, 10, of Taos, anxiously awaited their turn to pull in a fish from the cold, dark waters below the cracked, menacing ice.

“It’s fun and the best part is catching a fish,” Ryan said with a wide grin.

The boys’ uncle, Fred Archuleta, also of Taos, said it’s worth braving the elements for the day to get out with his family.

“We love the outdoors, hunting and fishing,” said Archuleta, manager of his family’s restaurant in Taos, El Taoseno. “It’s a chance to catch some fish and forget about work for a while.”

Archuleta wasn’t alone Saturday morning, Jan. 5, as he and about 30 other anglers huddled offshore near the boat ramp at Eagle Nest Lake State Park under threatening skies to try their luck.

Local businesses that cater to the anglers were happy to see them, although at least one questioned their sanity.

“You’ve got to be crazy to go out in this wind,” said Sue Finley with a shake of her head as she manned the counter at the Eagle Nest Marina’s bait and tackle shop, which is located on a road leading down to the lake.

Finley says most days on the lake are pretty nice with plenty of blue skies, sunshine and gentler breezes. Call ahead to the marina for the latest conditions at (575) 377-6941. 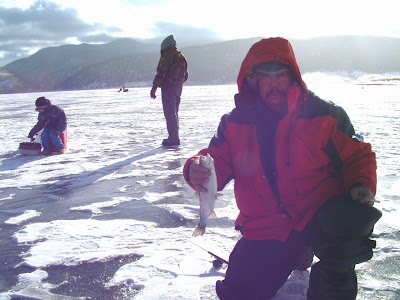 John Gonzales, 43, of Taos shows off a trout he reeled in from the icy depths of Eagle Nest Lake during a recent ice-fishing outing with family.

The state Department of Game and Fish regulates fishing on the lake and opened it to ice fishing beginning Dec. 28th after it had frozen to a thickness of nine inches or more.

The lake is expected to remain open to ice fishing as long as the weather stays cold.

That’s good news for Mark Stewart of Dos Amigos Anglers in Eagle Nest who, along with the local Chamber of Commerce, sponsors the annual ice-fishing derby on the lake.

The event is scheduled for Saturday, Jan. 19 with registration from 8 to 10 a.m. at the state park’s boat ramp. Fishing will commence at 10 a.m. and run till 2 p.m. The cost is $15 to enter and cash prizes are awarded to the top four positions based on the weight of the total number of fish caught by a contestant, Stewart said.

Stewart said 80 percent of the derby’s registration fees go to the cash prizes with the first place winner taking half of that.

Stewart said the event is highly dependant on the weather and last year only about 34 people showed up because of lousy weather while the year before the event was cancelled because the weather was too good.

“But so far it looks pretty good for this year and I hope we have a good turnout,” he says.Contact Stewart at (575) 377-6226 for updated information.

Ice fishing is an easy way to wile away a day and plenty of folks out of Albuquerque, Santa Fe and Los Alamos come up to Eagle Nest to do it, Stewart says.

Skiers hitting the slopes at nearby Angel Fire also spend time on the lake trying something different while on their vacation.

Shops like Stewart’s and Finley’s rent the tools necessary to enjoy a day on the ice including an ice auger to drill a hole, an ice skimmer to keep it from freezing up, a bucket to carry the gear and sit on and a small rod and reel.

Most anglers work just off shore in the shallower water and will try experimenting at different depths to see where the fish are hanging out. Sometimes a faint tap on the rod to give the bait or lure some motion is all that may be needed to attract fish, he said.

But the most important gear for an enjoyable day on the ice is proper dress, Stewart said.

Good insulated boots are essential as are plenty of layers of warm clothing, including a wind-proof, outer shell and warm gloves and cap.

A small, self-heating cushion like those sold to hunters is good to have while seated on the bucket and something like a piece of old carpet to lay on the ice will help insulate the feet from the cold.

Stewart also stressed that those venturing out onto the ice need to be careful walking on clear ice that has been swept free of any snow, as it can be very slippery. Snow covered or crusty ice is easier to walk upon, he noted.

And as for dealing with Eagle Nest’s legendary wind?

“Keep it at your back,” Gonzales, the successful fisherman, recommended.
This article also appeared in the Santa Fe New Mexican’s Outdoors section.

Take US 84/285 north out of Santa Fe to Española, stay on State Road 68 through town and then head north along the Rio Grande to Taos and the US 64 turn off to Eagle Nest. About 220 miles round trip. For a scenic return trip to Santa Fe, take State Road 434 south out of Eagle Nest, through Angel Fire to Mora and then take State Road 518 to Peñasco. Take State Road 75 through Peñasco and then turn off on State Road 76 to Truchas. Follow State Road 76 down through Chimayo to Española and then turn back onto State Road 68 and go through Española to US 84/285 back to Santa Fe. Adds about 30 more miles and more driving time due to mountainous roads but passes through many of the historic, Hispanic villages of Northern New Mexico.