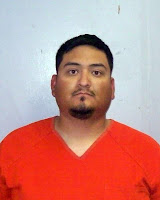 Former San Juan River fishing guide, Jude Duran, 29, of Flora Vista, has pleaded guilty to robbing a Montrose, Colorado bank in May 2008 of about $7,000 and now faces a maximum 20 year prison term when sentenced in January.

Duran is being held at the federal prison in Littleton, Co. and is scheduled for sentencing before Nottingham on Jan. 9, 2009.

Duran is expected to seek leniency due to his mental health issues and his wife’s declining medical condition, according to the plea agreement in the case.

Duran’s wife, Donna, suffers from Multiple Sclerosis and Duran has Obsessive-Compulsive Disorder and Attention Deficit Hyperactivity Disorder, according to court records in the case.

The plea agreement indicates that under sentencing guidelines used in federal cases Duran could conceivably be looking at anywhere between a 4 to 13 year prison term, however, the judge retains the ultimate discretion in sentencing and it remains to be seen how he rules.

The plea agreement spells out facts in the case including the following:

“On May 13,2008, the defendant (Duran) drove to Montrose, Colorado from his home in Flora Vista, New Mexico, arriving at approximately 9 a.m..

The defendant had recently acquired a handgun from a private party, for the purpose of committing a bank robbery.

Upon arriving in Montrose, he stole a Colorado license plate from a vehicle in a parking lot and, placed it on his vehicle after removing his New Mexico plate.

He then drove to the north side of Montrose on Highway 50, and placed a 911 call from a phone booth, and requested help in a disguised voice.

He then drove south to the Vectra Bank on Highway 550, where he donned rubber surgical gloves and disguised himself with a balaclava and sun glasses.

On entering the bank he pointed the handgun at the employees in the lobby and approached one of the teller windows.

He then placed a white bag on the counter and instructed the teller to put the money in it from both the top and bottom drawers and ‘no dye pack”.

Although the defendant contests this, a personal banker seated at a desk near the teller area, reported that the defendant pointed the handgun at her and directed her to move away from the desk, stating that, “it’s not worth it”.

The defendant then took the bag of money and left the bank, where he was observed by customers of a nearby business, who provided police with a description of the vehicle.

After replacing his New Mexico license plate, the defendant drove south out of Montrose, where he was stopped by Sheriff”s deputies.

While waiting for them to approach his vehicle, the defendant dropped the money and the handgun on the roadside.

He was released after his license and plates were cleared through the dispatch center.

After returning to retrieve the money and gun, he was stopped again, and this time arrested.

The defendant gave a full confession to both the Montrose Police detectives and the F.B.I.

The deposits of the Vectra Bank are insured by the F .D.I.C. The amount taken by the defendant and recovered was $7131.90. “

See the entire plea agreement and other courts records in the case here .

See related stories about the case including Duran’s reasoning behind the crime, here .

Before his arrest, Duran, an Albuquerque native, was a popular and well known, independent San Juan River guide who’d gained notoriety for his support of the use of multiple fly rigs on the blue ribbon, trout stream below Navajo Dam.

Such rigs have since been banned on the San Juan River at the request of a coalition of guides and fly shops who claimed the rigs caused needless death and injury to trout in the legendary trout fishery.