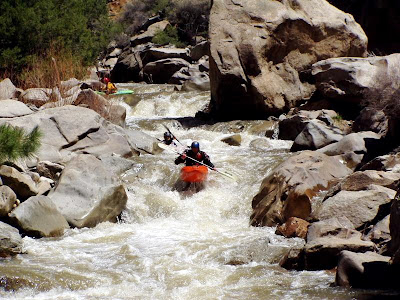 With near record snow pack levels in the mountains, New Mexico’s rafters and kayakers are psyched about the potential for a high and mighty runoff season.

“We’re extremely excited about what should be some awesome flows,” says Atom Crawford, 39, of Dixon, an avid kayaker who lives on Embudo Creek. “This could be an amazing year.”

And that means big water and plenty of it for commercial rafters like Steve Miller of New Wave Rafting of Santa Fe.

“If we don’t have an abnormally warm spell in April, we can expect to have some of the best runoff conditions since the eighties,” he says. “It should be pretty outrageous.”

And that’s what kayakers like Crawford are counting on to produce exhilarating runs on runoff swollen streams like Embudo Creek, the Rio Pueblo de Taos, Red River and the upper box of the Rio Grande.

Crawford, a multi-media designer who works at the Lab in Los Alamos, also expects the high water this year to really bring out the “extreme” river runners.

“And that kind of kayaking means there’s no margin for error,” he says.

Crawford says after 16 years of kayaking and a couple of near death experiences, he’s finally learned how to say no to that kind of challenge.

“There’s a limit to what I’ll do now,” he says. “When it gets too high, I’ll be up on the bank breaking out the camera.”

Crawford routinely posts kayaking pictures and stories to his blog at www.newmexicoh2o.blogspot.com

Those interested in more action will find a two-hour video available at his other website, www.newmexicoh2o.com ,
that features footage of kayakers running various northern New Mexico waters.

The video contains scenes of noted Santa Fe kayaker Ed Lucero running Embudo Creek during flood stage. Lucero may be best known for his 105-foot world record plunge off Alexandra Falls in Canada in the summer of 2003.

Ironically Crawford, a Dixon native and Taos High School graduate, said he got into kayaking after a rafting accident on the Rio Grande that nearly killed him.

Crawford was 15 years old at the time and was riding along with a friend and his father when the raft flipped in the infamous “Toilet Bowl”.

Crawford said he was trapped under the raft and kept going under the water before his friend’s dad managed to pull him out.

“I was terrified, I saw fish down there and thought I was going to die, “ Crawford said of the experience.

His fear of the drowning kept him off the river until he met a girl whose dad kayaked and he thought of taking up the sport in an effort to conquer his fear of the water. 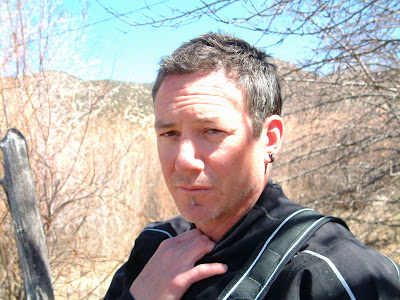 “Then I got hooked and everything became centered around it, where I went to college, who I hung out with. It became my life,” he says.

But once he overcame his fears, Crawford grew cocky about his river running talents and once again found himself swimming with the fish.

It was on a stretch of water called Canyon Creek in Washington state in 1998 where Crawford was attending Evergreen State College.

“It was in flood stage, outside the banks, we shouldn’t have even been there,” Crawford says.

The group of kayakers, including his good friend Benjie Howard, had stopped at a place called “Thrasher” rapids where a deep, roiling plunge pool had formed behind a giant, submerged boulder.

“You could have thrown a log in there and it wouldn’t have come out for days, “ Crawford says of the dangerous, swirling pool.

As the rest of his group moved on past the past the pool Crawford was overcome by a sudden impulse.

Before anyone could stop him, Crawford and his kayak were going over an eight-foot drop into the pool below.

“I was just thinking I had made it when it (the current) sucked me back into the maw,” Crawford says.

The powerful, current churned Crawford about, ripping his helmet and shoes off and snapping his kayak in half.

“It would let me go but then it’d suck me back down, slamming me against the bottom,” Crawford says. “I knew I was going to die and all I could think about was how my mom was going to feel.’”

The he blacked out.

“I guess once I relaxed and quit fighting it just spit me out,” Crawford says.

He was then swept downstream and into a rock where the impact brought him to.

“I lucked out,” Crawford says. “That was a real wake up call. Before that I thought I was invincible. Now I know better. I’m not afraid to back down from a challenge.”

Yet despite the harrowing tales, Crawford says he doesn’t know of anyone being killed kayaking during runoff season in New Mexico.

And that may be because kayakers who take to these waters during those conditions are well aware of the dangers involved and prepare accordingly.

Crawford, a certified white water instructor, says his number one safety precaution is never kayak alone. Always paddle in groups of three or more which allows members to assist each other when a mishap occurs, he says.

“And they will,” Crawford says.

“Being on the water can be a magical thing,” Crawford said. “You can forget abut everything except what you’re doing while you’re out there.”

Crawford said he carries a collapsible spin fishing rod with him during some trips and will cast a lure in search for big brown trout on stretches of water like the Rio Grande near Cerro.

“That’s an amazing place,” Crawford said. “The only people I’ve ever seen down there are the occasional skinny dipper and John Nichols fly fishing.”

Nichols, author of the New Mexico trilogy, Milagro Beanfield War, Magic Journey and Nirvana Blues, lives in Taos and writes about fishing forays into the Rio Grande Gorge in his book The Last Beautiful Days of Autumn.

Crawford says he was inspired by the likes of noted kayakers, Marcia Ready of Taos, Lucero of Santa Fe and he spent many years learning the sport by paddling with Aaron “Sven” Rane of Taos. 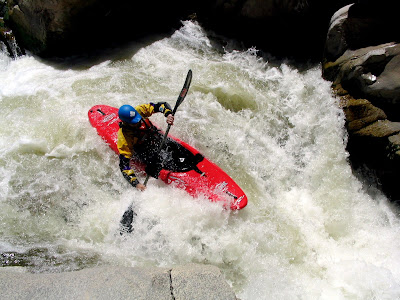 Crawford said those who are interested in the sport should read William Nealy’s illustrated guide to kayaking, check out one of Kent Ford’s kayaking videos and perhaps join the Adobe Whitewater Club of New Mexico down in Albuquerque.

Kayakers also use the Genoveva Chavez swimming pool in Santa Fe on Wednesday evenings for practice sessions and those interested in the sport can obtain some exposure there, Crawford said.

For more information go to the Chavez Center website.

In the meantime, those looking for someone else to do the driving will find plenty of opportunities to float the big river this spring with experienced guides from operations such as Miller’s.

It should be noted that New Wave Rafting which has operated from an office on Cerrillos Road for many years, is now moving to a new location on the Rio Grande near Embudo, Miller says.

“The cost of gas is killing us,” he said.

The company used to transport clients in buses and vans out of Santa Fe but can’t afford to provide that service anymore, he said.

Miller said clients can now meet the tour operator down on the river and will find directions and other information on their website at www.newwaverafting.com .