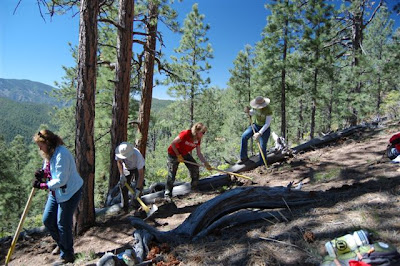 A group of volunteers armed with shovels, rakes and picks hiked high into the hills above Hyde Memorial State Park early this summer to give a forest trail a face-lift.

The effort was just one of many throughout the country to mark National Trails Day and highlighted two local organizations with a history of performing such public service.

The veteran group, New Mexico Volunteers for the Outdoors (NMVFO), teamed up with newcomers, REI (Recreational Equipment Inc.) of Santa Fe, to provide about 60 workers, including the author, to do the job.

“These guys were just fantastic,” said Sarah Wood of Hyde Memorial State Park. “This was one of the best turnouts we’ve ever seen.”

Bob Ward, manager of the soon to be opened REI store in the Santa Fe Railyards was credited with bringing in the bulk of the volunteers for the work.

Ward said he invited prospective employees of the new store to participate in the volunteer effort and filled the roster so quickly he had to turn many away.

About 40 REI volunteers joined NMVFO members and others to tackle the first mile of the Circle Trail that climbs a ridge just across the road from the state park in the mountains above Santa Fe.

The volunteers worked on the first mile of the trail which involved a steep climb of almost 900 feet to the top of a ridge which affords excellent views of the Pojoaque Valley and the Jemez Mountains.

Crews then worked their way back down the trail grooming it as they went.

NMVFO regulars like Jason Koschmeder, 30, of Albuquerque, served as crew leaders to train the volunteers how to eliminate trail side berms for erosion control, construct rock, water barriers and retaining walls and removal of debris and downfall.
Koschmeder, a nuclear medicine technologist, said he enjoys hiking and working outdoors, the camaraderie of a grass roots organization and doing something positive to preserve and protect the environment.

It’s a common bond that has drawn 150 members to the non-profit organization dedicated to improvement of outdoor recreational opportunities throughout the state, said Lowell Hioki, chairman of the group’s Board of Directors.

NMVFO has been in operation since 1982 and frequently assists local, state and federal agencies with projects.

Some work can be performed in a day, while other projects may require a weekend or even a weeklong, backcountry backpack trip.

The group has been doing a National Trails Day project at Hyde Memorial State Park for the past ten years, Hioki said.

The volunteers have also worked regularly in the Gila National Forest and Wilderness, at Navajo Lake State Park, on the San Juan River, Chaco Canyon and the Jemez Mountains, Hioki said.

Projects are open to anyone interested in helping out and can be found posted on the group’s website at www.nmvfo.

“You don’t have to join the group to join us on the trail,” he noted.

Hioki said he would love to see more parents and their teenage children get involved with the organization because it presents such a great opportunity to develop a family bond and more appreciation for the outdoors. 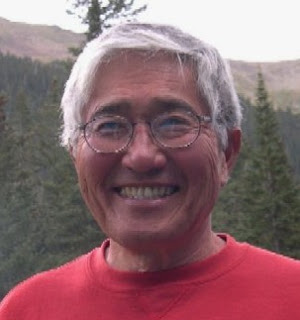 Hioki, a Hawaiian of Japanese descent, retired to New Mexico in 1997 after 33 years as an engineer with Hughes Aircraft in Los Angeles.

Hioki said he decided to move to New Mexico after he became bedridden with pneumonia and his wife brought him a Tony Hillerman novel to read.

Hioki became hooked on the New Mexican author and has since collected and read every one of his novels and is now a proud resident of the state.

Hioki said his volunteer work is one way to give back something to his new home.

Ward of REI is a former Californian who ALSO moved to New Mexico after falling in love with the state after a business trip to Albuquerque.

Ward, who has been with REI for 15 years and formerly managed its Berkley and San Francisco stores, said he jumped at the Santa Fe job so he could move here. 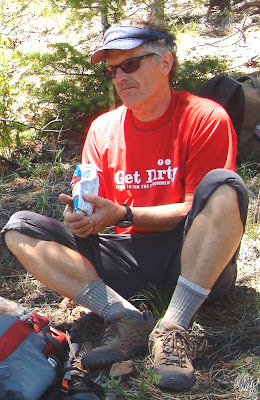 Ward too said he hopes to give something back to his new home state and intends to have REI’s employees and members become actively involved in outdoor projects.

REI members and employees have a long history of performing outdoor, volunteer work in communities where their stores are located. Anyone with volunteer project ideas can contact Ward at bward@rei.com.

REI, a consumer-owned co-op that sells outdoor recreational equipment has about 4,000 REI members living in Santa Fe. The company has had a store in Albuquerque for many years.

The new Santa Fe store slated to open in late August or early September will be the co-op’s 100th nationwide.

REI, consistently ranked by Fortune Magazine as one of the nation’s best company’s to work for, has attracted an estimated 600 applicants for about 60 jobs at the new store, Ward said.

Volunteer efforts by groups such as NMVFO and REI are essential to the successful operation of the facilities such as Hyde Memorial State Park, Wood said.

The park needs even more for the summer season including volunteers to assist guests at the park’s visitor center, conduct educational programs for kids brought in on field trips or serve as trail stewards.

“They are our lifeblood,” Wood said of volunteers. 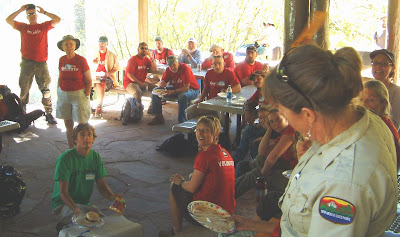 Sarah Wood thanks volunteers for their efforts after a day of hard work on the Circle Trail at Hyde Memorial State park on National Trails Day.