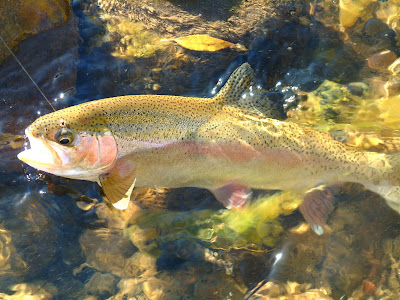 State Game Commissioners have shot down a proposal to limit anglers to the use of just two flies when fishing in New Mexico.

Johnson, owner of the Soaring Eagle Lodge on the San Juan River below Navajo Dam, went before the commissioners representing a long list of guides, fly shop owners and anglers who backed the proposed limit on multiple fly rigs.

They claim that the use of the multiple fly rigs is damaging the state’s premier trout fishery by foul hooking and ensnaring fish, which causes unintentional injury and death.

They report increasing sightings of dead fish and entangled waterfowl as reasons behind the proposal. (see related story .

There is currently no limit on the number of hooks or flies an angler can use when fishing.

The proposed rule change would have had no impact on anglers who use bait and would have only applied to those who fly fish, especially on the state’s special trout waters, where catch and release is encouraged, flies and barbless hooks are required and harvesting is severely limited.

The San Juan River below Navajo Dam is such a special trout water and draws thousands of fly fishermen annually to stalk the resident population of an estimated 75,000 trout, averaging 18-inches in length.

Johnson argued before the commissioners that the San Juan fishery generates an estimated $25 million dollars a year for New Mexico’s economy and preserving the quality of the fishing experience there was essential.

Chief of Fisheries for the state Department of Game and Fish Mike Sloan reported to commissioners that public comment ran two to one in favor of the adoption of the rule with just as many calling for limitation of the rule to the San Juan only.

Sloan noted that while the issue had elicited a great deal of response from the public, there was none from any of the state’s angling organizations.

Mike Maurer, president of New Mexico Trout, in speaking before the commissioners claimed his organization hadn’t been made aware of the proposed rule change and thus didn’t have time to respond.

State Game Commissioner Jim McClintic, who noted his lifetime membership in New Mexico Trout, said he had received a lot of correspondence complaining about a lack of notice about the proposal. Newly appointed Commissioner, Oscar Simpson, also questioned the lack of notice and timing of the proposed rule change.

Opponents also argued that there was no scientific evidence to back the proponents’ claims and said statewide enactment of the rule, as state Department of Game and Fish officials proposed, was too far reaching.

Opponents also said that the use of three fly rigs was a widely used, traditional and appropriate practice among many in the fly fishing community and questioned the need to restrict its use without scientific evidence to prove its harm.

Sloan noted that the issue had been posted on the department’s website seeking public comment, and advertisements were placed in statewide papers announcing the rule change and where to go for public meetings.

The department proposed statewide adoption of the rule for uniformity’s sake, concedes much of the evidence of damage done by the rigs is anecdotal and was presenting the rule change prior to printing a new fishing regulation handbook.

The proposal was brought up for a vote upon the motion of Commissioner McClintic who remarked that he didn’t like the way the issue had been handled.

The majority of the board voted no with Commissioner Sandy Buffett, who had suggested tabling the motion for further study, the lone vote for adoption of the rule.

“It’s just what we hoped for,” Maurer of New Mexico Trout said of the commissioners’ decision. “If it had been restricted to just the San Juan we might have gone along with it.”

Johnson said his organization would regroup and consider their options.
“But we’re not done with this yet,” he said after the hearing.

In other action the commissioners also voted to extend the Gila trout season in Black Canyon by an additional month to accommodate those frequenting the Gila wilderness and national forest in southern New Mexico during the hunting season.
The new season runs from July 1 to Oct. 31.

This is a catch and release area with barbless hooks or lures required and anglers must possess a free, special permit available online from the department.

Last year commissioners opened up select sections of the Gila to limited fishing, the first time since 1966, after the recovery efforts allowed the fish to be down listed from endangered to threatened.

Commissioners have now voted to also open lower Mogollon Creek to fishing for Gila trout this summer under the same conditions as Black Canyon.

This stretch of river requires about a six-mile hike in.

Anglers will also find opportunities to catch Gila trout on Iron Creek which features a two fish bag limit but also requires a lengthy hike in and is open year round.

Yvette Paroz of the department’s Conservation Services Division reported to commissioners that excess pure strain Gila trout reared at the federal hatchery in Mora were recently released into Gilita, Willow and Sapillo Creeks and the Gila Forks area.

Some of those fish were brood stock up to 20 inches in length and anglers have recently submitted catches to the department for consideration as the state record Gila trout catch.