On the San Juan River with Fishing Guide Peggy Harrell 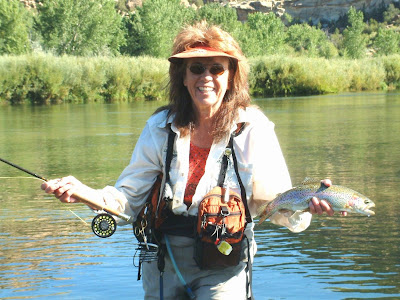 You could call her the queen of the San Juan River.

She’s that good-looking gal behind the counter at Fisheads Fly shop.

The one dispensing expert advice on how to fish the blue ribbon trout waters or offering to guide a couple of lucky anglers below legendary Navajo Dam.

And in the man’s world of flyfishing, it’s a role she relishes.

“I love this job,” she says with a beaming smile, “And being a woman doesn’t hurt either.”

Peggy Harrell grew up with her younger brother and sister out in the Oil Patch of Hobbs, NM.

Their father was an auto mechanic while Mom worked for the telephone company.

In the summer the family would vacation in Texas, renting a cabin at a lake where the kids learned to fish.

“All the guys would get to go out in the boat but us girls always got left behind on the shore,” she says. “I felt bad but maybe it was just because they didn’t know what to do with us if one of us had to pee.”

During her career she has had to overcome other gender based obstacles in order to achieve respect as a fishing guide.

“When I first started out it seemed I’d get a lot of guys who didn’t listen to me or questioned everything I said,” she said. “Or maybe someone would try to squeeze into my hole out on the river. I always felt like it was because I was a woman.”

But Harrell says that changed, as she grew more experienced, confident and assertive.

“Now I feel like most clients who ask a lot of questions just want to know what my qualifications are,” she says.

Harrell says she’s been fishing on the San Juan River for almost 30 years and guiding for the last fifteen.

She ended up in this remote corner of the state because her husband was a lineman.

The couple moved to the area so he could work a job at one of the nearby power plants.

Harrell says her husband then was an avid outdoorsman who loved to hunt and fish and he taught her a lot.

“We would go snagging for salmon up on the lake and then shoot ducks and fish for trout down on the river,” Harrell says. “We were in heaven here.”

But the husband moved on and Harrell stayed behind, making a go of things in the small community of Navajo Dam.

Harrell’s 34-year-old daughter, Nicole, lives nearby and she has five grandchildren.

“I don’t know if he (her former husband) knows what I’m doing these days but I’d like to thank him for nursing me through a lot of those early fishing trips,” she said.

Harrell also credits Chuck Rizuto of Rizuto’s San Juan River Lodge with giving her a start in the fishing business, along with a little help from Jane Fonda.

The way Harrell tells it she heard Fonda, the famous movie star and Vietnam War activist and her media mogul husband, Ted Turner, were floating the river with Rizuto one day.

So Harrell wandered down to Texas Hole to see the famous couple as they fished from their boat parked just off the bank.

Harrell says she struck up a conversation with Fonda after which the celebrity made a point of asking Rizuto why he didn’t have female guides on his staff.
Harrell says the next day Rizuto offered her a job.

“He was my mentor,” Harrell says. “I learned a lot from the man.”

And one of her first trips was to guide movie actor Kevin Costner on the river.

“I had to pinch myself at the end of the day,” she said. “Imagine, I got to go fishing with Kevin Costner.”

Harrell, who now a flyshop manager at Fisheads and still guides on occasion , says she enjoys working with a lot of men.

“And I enjoy being a woman,” she says. “So that certainly hasn’t hurt the business.”

Harrell likes to point out that fraternity of fishing guides on the river don’t treat her like she’s “just one of the boys” and that’s something she proud of.

Harrell, a 1970 Sandia High School of Albuquerque, says one of the most satisfying parts of her job is teaching clients how to successfully fish the San Juan River.

“And the primary key to that is an absolutely drag-free drift,” she says. “You can’t learn that fishing out of a drift boat.”

Harrell says she often feels sorry for those who take an expensive and productive float trip down the river but then find in ensuing days — while wading on foot — they may not be having as much luck.

That’s because the boat provides a perfect platform from which to dead drift an angler’s offering through the water, while the guide steers the boat to the best holes, picks the flies to use, sets the rig for the proper depth and tells the client when to set the hook.

“The poor guy hasn’t learned a thing for himself,” Harrell says. 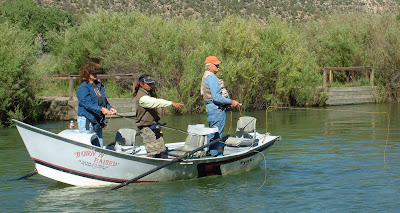 A client who takes a wading trip with a guide like Harrell receives a half or full day’s instruction in how to read the water to detect fish, how to determine which flies to use and at what depth and other techniques like casting and how to detect a strike and then play and land a fish.

“That client walks away with enough information and hands-on experience to continue fishing the rest of this river with sucess,” she says. “When I hear them say I learned a lot, you taught me a lot, that makes my day.”

Harrell has some sage advice to those venturing out on the San Juan to stalk the river’s great population of big rainbow and brow trout especially this fall.

“Always stop at one of the fly shops and ask what’s working and where,” she says. “It’s amazing how many people come up here, fish all week, and then stop in on the last day and tell me what a lousy trip they had. They should have come see me first.”

Harrell finds verbalizing for customers what she can’t show them down on the river is a challenging but rewarding part of her job.

“When they come back and say ‘hey that worked,’ I always feel good,” she says.
And anglers need to remember the basics when fishing the heavily fished but well populated waters of the San Juan.

Harrell says stealth and a delicate presentation are just as important on the San Juan as a wilderness stream if anglers want to be successful, especially during the fall when the water is so clear.

During her guide work Harrell has also been tapped to served as an ambassador for the guides and fly shops on the San Juan. This spring (2007) she got to travel to California to speak to several fly fishing clubs about fishing the fabled river.

“I really enjoyed representing us,” she said.

Harrell can be reached at peggy@blueskyflyfishing.com.

During her off-time Harrell can often be found cruising Navajo Lake in search of bass and other freshwater fish with her boyfriend and fellow fishing guide, Mark Nesbit of Blue Sky Fly Fishing . 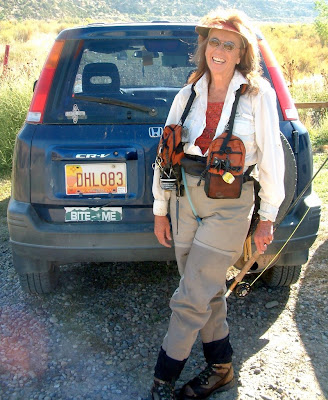 During a fall 2007 interview on the banks of the San Juan below Navajo Dam, Harrell offered the following insights:

Favorite time of year to fish the river:

“I tell people the best time to be on the San Juan is any time you can be here,” she says. “But for me it’s got to be the two weeks after the water comes down (usually in the early summer).”

“Above the cable hole in the catch and release area, there’s no boats to deal with.”

“A magnetic fly holder, it works easier and better than a patch.”

“People who try to teach the sport to their children too soon and clients who don’t listen to me,” she says. “Most kids don’t have the physical capabilities or attention span before the age of twelve and why hire me if you don’t want my advice. Both can be a waste of my time.”

“Overcasting!” she says. “Casting over fish and casting too far to control the drift.”

“I fish the San Juan almost exclusively,” she says. “I’ve been spoiled by the size and quantity of fish here.”

From Santa Fe, take US 84/285 north to Española, cross the river and take US 84 north to Chama and then take US 64 West through Dulce to State Road 539. Cross the dam and go down to the river and the village of Navajo Dam is further downstream. About 185 miles one-way. An alternate, high-speed route but about 40 miles longer involves taking I-25 south to Bernalillo, then State Road 550 northwest to US 64 at Bloomfield to State Road 511 at Blanco and up to Navajo Dam. Camping at State Parks at the lake or down on the river. Rooms and services available in Navajo Dam.

This article originally appeared in the Santa Fe New Mexican’s September, 19, 2007 edition of its Outdoors section.