Report Sums Up Shape of the San Juan River 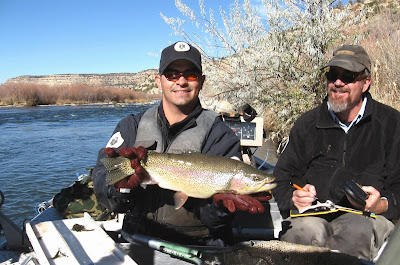 State Department of Game and Fish Biologist, James Dominguez, 36, of Tucumcari, displays one of many fine trout found in the waters of New Mexico’s San Juan River during an electro-shocking expedition in the late fall of 2008. To the right, San Juan River Fisheries Biologist, Marc Wethington,44, of Kirtland, takes note.

Wading around the corner of a willow choked island at Baetis Bend on the San Juan River recently, I encountered a well-appointed but clearly disappointed fly fisherman.

“This river has gone to hell, “ he complained.

I wondered what the problem was as I looked over the water he was deserting. After all, it was a gorgeous, late fall day, trout were rising and he’d had this whole stretch of New Mexico’s premier trout stream all to himself.

What he was complaining about was low water flows in recent years that he believed had killed off insects that the river’s trout feed upon.

He lamented the loss of the good old days, back when water released from Navajo Dam ran much higher, scouring silt and sediment from the river bottom, producing conditions in which insects thrived, making fishing here a breeze.

He concluded that the river and the fishing had suffered and mumbled bitterly as he shuffled off around the bend.

But within minutes I was into a classic San Juan rainbow, 18 inches of fight, straining mightily against my line, then sailing through the air and making my day.

Because, although some of what the disgruntled angler said may be true, the river’s trout population today continues to thrive and most anglers are highly satisfied with the fishing.

That’s according to a recently released study of the river by the state Department of Game and Fish.

“Despite the circumstances, this is still a very healthy and productive fishery,” says Marc Wethington, the department’s fisheries biologist on the San Juan and key contributor to the report. 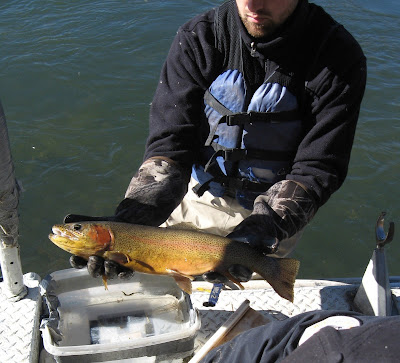 “The number and quality of the fish look real good,” Wethington said as he inspected fish snared during a late November, 2008 outing.

Floating downstream with Wethington at the oars, crew members James Dominguez and Sean Buczek lean over a rail mounted on the front of a 14-foot raft, armed with nets mounted on long poles.

At the back of the boat a gas-powered, electric generator chugs away, providing current to a probe immersed in the water at the front of the raft.

Strands of wire dangle from the back of the boat to complete the circuit and provide a “stun-zone” under and around the boat.

As we float downstream, dozens of fish can be seen darting about, running from the shock while others, caught in the current, float unharmed to the surface.

Snared by the crew, the fish are poured into a holding tank to await inspection.

After a short run, the tank is brimming with trout and Wethington beaches the raft and the work of weighing, measuring and inspecting the trout begins.

The crew notes if the fish show evidence of having been caught before and in one case delicately untangle a line and several flies embedded in a trout’s snout. 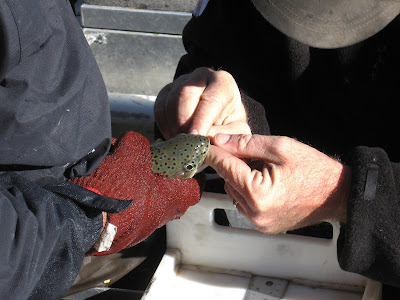 The trip resulted the largest trout caught being a 24-inch Rainbow while an average size of 17-inches was the norm in places like the Cable Hole and Upper Flats as well the stretch downstream between Jacks Hole and ET Rock, Wethington said.

The river’s Brown trout is also increasing with Browns accounting for 65-percent of all fish caught during the electro-shocking trip from Texas Hole downstream, Wethington said.

This stretch also produced the most fish during this year’s expedition, accounting for almost 700 fish-per-hour, Wethington said.

Electro-shocking catch rates on the river have been steadily increasing in recent years with the Texas hole stretch giving up the most fish last year, according to date compiled in the department’s report.

And while the data shows the river’s trout population to be very healthy, what it fails to capture is the stunning number, sheer size and beauty of San Juan trout seen during one of these electro-shocking expeditions.

The survey takes in fish along the San Juan River’s upper four miles of quality water where anglers are limited in the first quarter mile to catch and release only, using single barbless lures.

The remaining quality water mileage is ruled by the same tackle restrictions, but has a bag limit of one-trout-per-day, over 20 inches, with the angler forced to cease fishing upon taking a fish.

The survey also takes into account three miles of downstream “bait water” where the bag limit is five-fish-per-day and no tackle restrictions.

The report, in using information collected during these and other surveys such as angler interviews, reveals a number of trends.

For instance, the popularity of the San Juan River has steadily climbed over the years to the point that angling pressure is three times heavier now than during the mid-80s when the river is said to have been at its best.

Yet the vast majority of anglers interviewed, 92 percent, indicate they were highly satisfied with their fishing experience on the San Juan with an average catch of one-fish-per-hour and a little more than 5 percent reporting having caught fish exceeding 20 inches in length.

The San Juan is regularly stocked which accounts for the estimated 70,000 fish found in its waters. An estimated 60,000 fingerling Rainbow trout are planted annually, many of whom eventually grow up to become one of the San Juan’s good looking, hard fighting, world-renowned trout.

On average, anglers reel in a trout measuring 16 to 18 inches on this river, Wethington says.

But the San Juan River also supports a healthy population of naturally reproducing brown trout that can be regularly found inhabiting the same waters as their brethren. 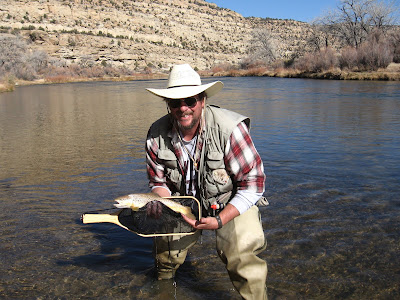 The author displays a nice San Juan Brown Trout caught in the lower stretches of the San Juan River’s quality waters in the late fall of 2008. Special thanks to David McGee of Roswell for taking the photo.

Stocking of the lower stretches of the river, where anglers can take their limit, accounts for another 46,000 pan-sized trout each year.

Surveys show fish over the size of 20 inches or more are consistently caught in the lower stretches of the river.

Angler survey data also shows the river is busiest during late summer and early fall and slowest during the winter while the heaviest pressure is on the upper reaches, at and above Texas Hole, and the least down in the Pump House Run.

The vast majority of anglers found on the San Juan are from out-of-state, about 62 percent, while New Mexican’s accounted for 28 percent with the remaining 10 percent living in San Juan County.

The report notes that survey results show the river’s angling performance meets or exceeds the department’s management goals and contributes about $25 million to the state’s economy annually.

The report also addresses some issues raised by those concerned about the river’s health due to low water flows and silt and sedimentation that some claim is caused by oil and gas development in the area.

The report notes that a United States Geological Service (USGS) study of the oil and gas industries’ impact in the area shows that the vast majority of silt and sediment accumulating in the river, 87 percent, is generated by naturally occurring runoff, not the energy industry, as the industry’s critics claim.

The report notes another study by the New Mexico Department of the Environment that also determined that much of the silt and sedimentation in the river below the dam was naturally occurring and hadn’t negatively affected the river’s insect populations’ ability to thrive. 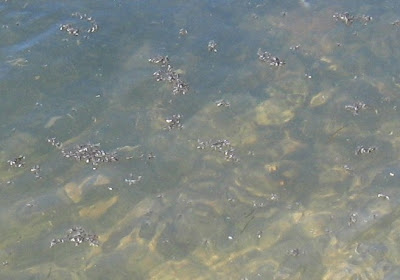 The San Juan River’s abundant midge hatches confound many fly fishermen due to their miniscule size and difficulty to match but trout find clusters of them provide a delicious meal.

Nonetheless, the department’s report notes that continued oil and gas development combined with lower flows could potentially harm the fishery and indicates the department’s willingness to work with all stakeholders to minimize those effects.

The report responds to the controversial issue of the lower water releases by summarizing the dam’s operational history and highlighting the department’s efforts to address the low water’s effects.

Water releases are controlled by the federal Bureau of Reclamation with operational guidelines set at a minimum flow of 250 cfs with a high of 5,000 cfs in the late spring to mimic the natural flood cycle of the river.

The BOR tries to maintain a consistent flow of about 500 cfs throughout the year, but that flow can fluctuate dependant on storage capacity and other conditions. For instance, the BOR did not make high springtime releases in the years 2002, 2003 and 2004, due to low storage.

Advocates of the river claim the recent low flows have had a negative impact on the river and they are calling for an increase in water deliveries to help the fishery recover.

“Sure, we’d all love to see 700 or 800 cfs minimum flows, but the reality is I don’t see that happening,” Wethington says of the controversy. “The reality is we expect to see even lower flows as water development continues.”

Most water stored in the dam is owned by the Navajo Nation and is expected to be siphoned off in future years to satisfy growing demand for agricultural, municipal and other developments, he says.

Wethington notes anglers are enjoying a fishery built on borrowed water and that advocates face an uphill battle in altering the game rules governing the dam and its water.

Thus, the department has geared its efforts towards minimizing the impact of expected lower flows by installing in-stream, habitat improvements designed to help transport silt and sediment further downstream while also providing trout better accommodations to weather the storm.

If nothing else, the San Juan is the only fishery in the state protected by a minimum flow requirement and that bodes well for it’s future, Wethington said.

See the department’s report on the Game and Fish’s at www.wildlife.state.nm.us .