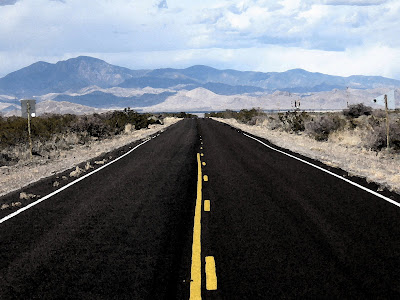 We were headed about 200 miles south to Truth or Consequences and a cheap room at the Belair Inn.

At $50 bucks a night I envisioned a swaybacked bed, bare bulbs and thin walls.

Instead we found two big, firm beds covered in soft, warm comforters with four fluffy pillows waiting on each. The lighting was soft and inviting and the walls, thick and quieting.

The dog settled right in and we kicked back with a cold beer from the little fridge.

Me and my wife, Wren, looked at each other and grinned. Go figure.

We were here for the town’s natural hot springs, hoping to melt away weeks of heavy snow, bitter cold and biting wind that had chilled our bones.

Perhaps the steaming, hot spring waters would clear our congested heads, loosen our aching muscles and bring relaxation to our harried minds.

It was the same reason the Chiricahua Apache leader Geronimo came here, to relax and heal up in the hot waters bubbling from the ground. 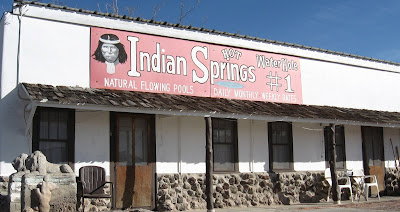 The downtown museum bears his name and provides more details about this legendary Indian and plenty more about the history of the region.

For instance, the town was once called Palomas Springs because of the doves that roosted in its trees. Then that was shortened to Hot Springs, just like so many other towns throughout the country that had sprung up around geothermal attractions.

So in 1950 when Ralph Edwards of the popular television show Truth or Consequences offered to televise his 10th anniversary special from the first town to adopt his show’s name, the residents here bit at it.

The feeling was the town’s tourist business could use the free publicity and finally dump what was a very common and a dead-end name.

The name change wasn’t without controversy, though, and since then it has been put up for a revote three times, but the majority of residents have each time elected to retain the Truth or Consequences name.

And Ralph Edwards? Well, he proved to be a stand up guy, coming back to this dusty, little town, year after year, to help celebrate its Fiesta celebration in May. The town responded by naming its beautiful, downtown, riverside park after him. 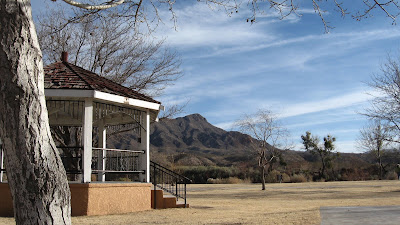 Edwards died in November 2005 at the age of 92 at his home in West Hollywood, Calif., in his sleep, like all those who have lived good lives do.

Truth or Consequences, or T or C as the locals call it, is just a blink of a town.

Most folks just blow right by it on I-25 without ever stopping. Those who do usually end up at one the typical businesses normally found clustered around the highway ramps located at either end of town.

But those who take the time to roll through T or C will find much to enjoy in this funky, desert, hideaway.

We started with a soak in a private tub at the Riverbend Hot Springs, just $50 for the two of us for two wonderfully, long hours. We giggled like kids as we peeled off layers of wool, fleece and denim, kicked our winter boots into a corner and then climbed into the deep stone tub.

Ahhhhh we exhaled as we sunk into the bubbling, hot water. With heavy sighs, we settled back and let the steaming water do its work.

Within minutes our faces were flushed red, sweat beaded upon our brows and our hair lay matted and wet.

Within minutes we were forced to climb out and lay in the warm winter sun, a gentle breeze quickly cooling our skin. As we lounged naked by the riverside, our privacy was ensured by a nicely constructed, rattan screen enclosure, its open front facing the river and the slate, gray mountains looming across the far bank. 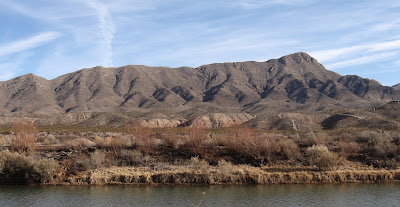 We watched as an eagle circled overhead against a brilliant, blue sky while several smaller birds gave chase. On the river, ducks paddled upstream against the river’s current, dipping under to feed and then emerging later further upstream.

The sun blessed our bodies and Santa Fe’s artic grip seemed a million miles away.

Upon emerging from our soak we scheduled a reservation for the next morning and took a stroll around town to check out some of the fabulous, Depression era architecture it boasts.

Many of these buildings are painted bright and lively colors giving the place a feel like that of old Mexico. There are rows upon rows of apartments that harkens back to its heyday as a resort. 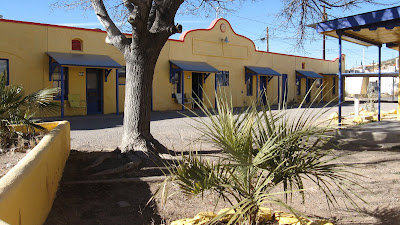 And we saw many people out and about, walking through the small town. When we said “hello,” it was interesting that most complained about the weather; apparently it was still too cold for them.

To us it was absolutely delightful. We were stripped down to sweatshirts while the locals were all bundled up in jackets.

It was maybe 50 degrees out and very sunny.

I guess the locals were used to even balmier weather but this latest artic blast had even left its impression down here. 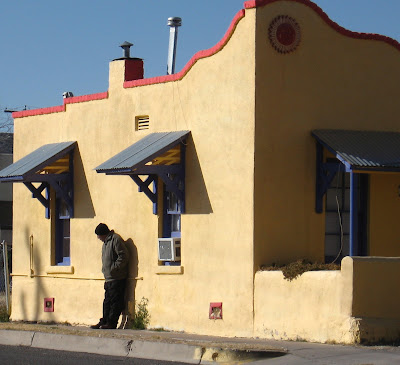 We came across a couple coming out of a row of apartments and asked about the building. The woman said she was the manager and stated that there was room available for a “lady” with a private bath for $290 a month. There was also another room available for a gentleman that could be had for $235 with the use of a shared bath.

Wow! A person could actually survive on a Social Security pension here and it looked like many people did as we passed row upon row of travel trailers and recreational vehicles parked along the town’s back streets.

This part of town had that “Mad Max” kind of a feel to it and I envisioned people huddled around a campfire on any given night, sharing a toke and nip off the bottle, smoke curling about their bodies in the shimmering light of the fire.

As we walked, we came across a little diner on a side street just up the street from the downtown Baptist Church. It was called the Sunset Grill and the grilled, patty melt here was to die for – the fries? just perfect. 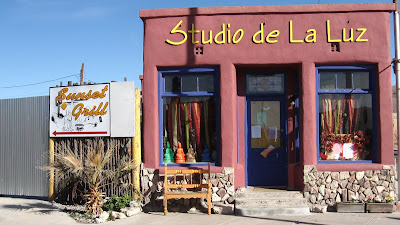 And while we found the young waitress to be a little too much of a wise-ass for us, it was just what you’d expect from a good, small-town diner, the likes of which are a rapidly fading institution in this country.

However, the veteran waitress who served us breakfast at the same place the next day brewed a fresh pot of decaf before taking our order and had every condiment any one would ever want before we had a chance to ask for it.

The downtown area, which has its share of empty storefronts, features a small assortment of galleries and tourist shops, many offering the nicely priced work of local artists, both long-timers and those more transient. 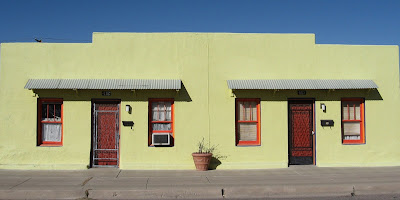 The work of local potters is especially good and we have in the past picked up several nice items from Ken Merrick’s Spectrum Pottery studio at 411 North Date St. located on Motel Row.

While there on our latest trip we noticed several locals – with personal travel cups in hand — looking disappointed upon finding the local coffee bar closed for the holiday weekend.

What’s impressive about this town is their main street appears to be as important to the locals as it is to the visitors as is evidenced by the steady flow of traffic at the local, downtown supermarket and drugstore.

We round out our trip with a drive up to the state park below Elephant Butte dam where we could take a nice walk along the river. 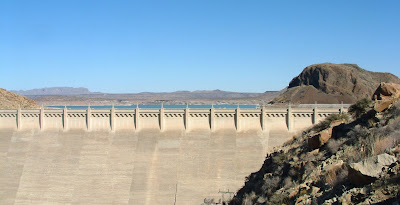 It was here that many years ago when I was hiding out in Las Cruces and cooking at another great diner, Dick’s, that I had a memorable fishing moment.

I had taken a day off and came up to T or C to fish below the great dam. The current was ripping along pretty good and there I was with my fly rod in hand chucking a heavily weighted Wooly Booger into the churning waters.

I watched helplessly as it was swept away in a flash. Well, at least I was out fishing, I thought to myself.

Suddenly a big Chevy Suburban with tinted windows came roaring down the dirt drive and stopped amid a swirling, cloud of dust by the river’s edge.

A couple of guys in diver’s suits, armed with spear guns, climbed out. They backed their way into the water and disappeared.

I stood dumb-founded until a few minutes later one of the divers poked his head up from the water over by the far bank, behind a couple of big rocks. Then he held up his spear gun with a giant fish impaled upon it.

I looked over to the Suburban where their driver stood grinning broadly, nodding his head up and down.

I felt like a fool, standing there in hip waders, armed with a fly rod, and sheepishly walked away.

They sure do things differently down here, I remember thinking to myself.

We topped off our most recent trip with a visit to the recently restored guesthouse at the Elephant Butte Dam Site Resort and Marina located just a short drive out of T or C.

At the top of the hill take the road leading down to the dam site and marina. Here you’ll find fine examples of the CCC (Civilian Conservation Corps) work done at the dam, including the historic restaurant, guesthouses and park. See this New Mexico State Parks document for more information about the CCC work at Elephant Butte Dam.

We found the hilltop day use area above the marina offered great views and a wonderful location for a picnic or perhaps even a wedding party. See the dam site for more information about the park.

And on driving back home we took State Road 195, also known as Lake Shore Drive or Rock Canyon Road, from the town of Elephant Butte north along the western edge of the lake. We pased by several empty camping and fishing areas which piqued our interest and were filed away for reference on future trips. 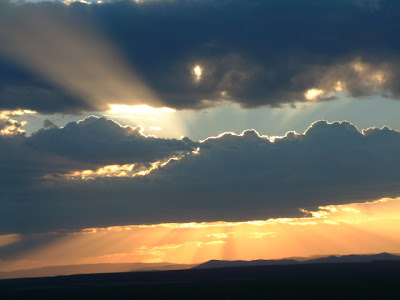 The Butte, as it is known to locals, is a huge reservoir that spans many miles of remote shoreline, sandy beaches and offers plenty of warm water fishing. This great, little back road emerges at exit 89 on I-25 at the Monticello Point turnoff.

But don’t bother trying to find this road on a Richardson administration state transportation map, these maps are now virtually useless for identifying anything but the most heavily traveled routes.

The New Mexico Road and Recreation Atlas or the Roads of New Mexico atlas provide much better details of these kinds of back roads and should be made part of any New Mexico explorer’s road trip kit.

Anyone seeking to discover the true spirit of southern New Mexico should consider Truth or Consequences as a vacation destination, especially in the middle of the winter.

Posted under Uncategorized
Comments Off on Road Trip NM – T or C or Bust!