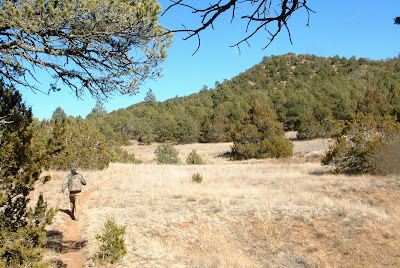 Outdoor enthusiasts have a new area to explore in the Sandia Mountains south of Santa Fe with the recent addition of 700 acres of Gutierrez Canyon to the inventory of public, open space.

Located south of the Post Office in the village of Cedar Crest about 50 miles south of Santa Fe on State Highway 14, is a dirt lot that leads to the newly acquired public land.

“It’s owned by the people now and they can go use it,” said Jay Hart, director of the City of Albuquerque’s Division of Parks and Recreation whose Open Space Division will manage the property.

Visitors will find rudimentary trails laced throughout the piñon and juniper studded foothills and deep canyons harboring, towering ponderosa pines and plenty of wildlife, says John Peterson, a retired U.S. Fish and Wildlife Service field supervisor who lives nearby and was instrumental in the properties’ acquisition.

Peterson said hikers can expect to find sign of wildlife including bears, bobcats, coyotes and the occasional mountain lion or even a ringtail cat in the area. Hawks, buzzards and eagles can be seen soaring in the updrafts above the hills too, he said.

Peterson, a longtime Cedar Crest resident, says the former ranchland has always been used by locals for hiking and horseback riding and the potential threat of development prompted him to work for public purchase of the $2.3 million property owned by the Milne family of Albuquerque.

Peterson found an ally in his effort with the Trust for Public Land, a national non-profit organization that works to conserve land for public use, and was able to secure $1.25 million from the state Legislature last year.

Then the state Energy, Minerals and Natural Resources Department kicked in $450,000 and the City of Albuquerque added a final $500,000 to the pot.

The city became involved because they already owned an adjacent 300-acre piece of land within Gutierrez Canyon that it had acquired from the BLM (Bureau of Land Management) back in the 1960s.

The city’s Open Space Division oversees 30,000 acres of public property scattered throughout the metropolitan area and surrounding counties and ranks first in the nation in open space per capita.

The state’s funding was contingent upon finding a public entity with appropriate resources and experience to manage the property, Hart said.

So when Albuquerque Mayor Martin Chavez committed the city to taking on the new parcel of land, a deal was offered to the Milne family, Hart said.

Although the state was $100,000 shy of the appraised $2.3 value, the Milnes agreed to accept and turned the property over to the public.

The new open space area will be named after John Milne, the former longtime superintendent of Albuquerque’s Public Schools for whom its football stadium behind Roosevelt Park is named after.

“I think he would be delighted,” said Milne’s granddaughter, Ruth Schifani, an Albuquerque lawyer who along with her four brothers approved the purchase.

Schifani said her grandfather purchased the property from the State Land Office for 10 cents an acre back in the 1930s. It was never developed and family members used it sporadically for an occasional hiking or camping trip.

“When we wanted to go up to the mountains, that’s where we’d go,” she said. 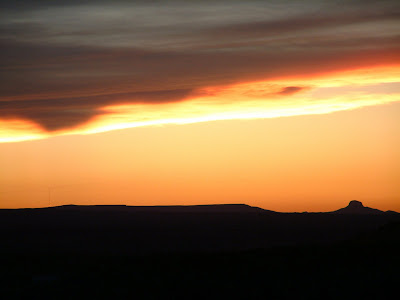 The family generously allowed locals to continue to use the land for recreational purposes and was more than willing to sell it to the public when an offer was tendered.

“We’re delighted it’ll continue to be enjoyed by the neighbors and the public,” Schifani said.

In the past, those who wanted to use the open space in Gutierrez Canyon would first have to know how to get to it through a maze of local neighborhoods.

But now with access to the entire property available right off State Highway 14, it’ll be easier for out-of-towners to find it.

Curtis Johnson, owner of the Turquoise Trail Center strip mall located next to the Post Office, says he psyched about the new open space.

He envisions eventual development of a parking area, trailhead and restrooms on the open space property and expects that to be good for his center’s businesses.

“Maybe we’ll bring in a coffee shop and bike shop to serve them,” he said.

Johnson lives across the highway from the Milne Open Space and is pleased it will remain undeveloped.

Hart said rules governing the open space area include prohibitions against the use of motorized vehicles such as ATVs (All-Terrain-Vehicles) or dirt bikes, no hunting or shooting is allowed and no camping, open fires or woodcutting is allowed.

“We want to maintain it in its natural state as much as possible” he said.

But dogs on a leash, mountain bikers, and those riding horses are more than welcome to enjoy the open space, he said.

Signs marking the open space area have yet to be installed but should be in place by this summer, Hart said.

In the meantime hikers need only look for the open dirt lot next to the Post Office and then head off into the gully and the surrounding countryside. Trails and property boundaries are readily apparent.

The new hiking area provides a great day trip for those living in Santa Fe with stops in the funky, old mining towns of Cerrillos and Madrid or perhaps a side trip up to Sandia Crest overlooking Albuquerque available along the way.

If You Go:
Take State Highway 14 out of Santa Fe past the State Penitentiary, the town of Cerrillos and on through Madrid. Continue on State Highway 14 to Cedar Crest and stop at the Post Office located next to Turquoise Trail Center. Park in the dirt lot adjacent to the Post Office and hike down into the gully and follow trails north and east. No trail signs or other services available. About 55 miles, one-way. An alternative return trip involves following State Highway 14 to its end, crossing under I-40 and heading west into Albuquerque along the frontage road, which emerges, on the top end of Central Avenue. Follow into town and then jump back on I-25 and head north. Adds about 25 more miles to the return trip.