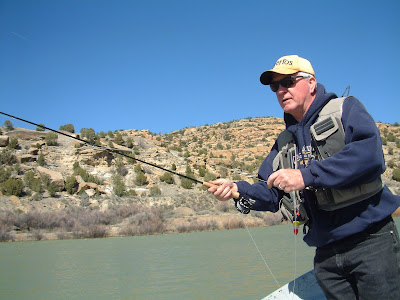 I knew a man once who considered the San Juan River below Navajo Dam nothing but a fishermen’s cathouse, stocked with big, bawdy fish whose sole purpose in life was to satisfy every anglers’ fishing, fantasy.

It was too crowded, too noisy and way too competitive for him. He’d rather stick to the solitude and simple beauty of his small, mountain streams.

He was right in many ways but I fear he missed the real lure of this river, the fact that you’re playing in the big leagues when you’re fishing the San Juan.

It features big, wary fish that can leave an angler crying in its wake as one escapes downstream.

That was me back in the winter of 1996 when a good friend and colleague of mine, Glenn May, dragged me kicking and screaming to the San Juan River in the middle of blinding, snowstorm.

“This’ll be great,” he promised as we pulled up to the cable hole just below the dam.

And it was, just as soon as I felt a heavy tug on my line and saw a tall fin cut through the water.

My reel sang as the big, powerful fish peeled off line.

Then she broke the surface in a monstrous splash of iridescent red, green and blue.

I leaned back on the rod and felt it go pop!

She was gone. I’d lost her.

And that’s all I could talk about for the entire, four hour, ride home across the slippery, snow-packed roads of northern Rio Arriba County. 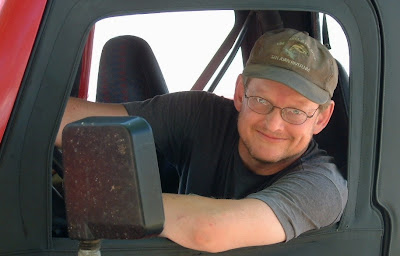 My buddy just kept grinning at me. He knew I was hooked and we would spend many more days down on this river together.

And over the years I’ve gone from spending just a day on the river to fishing it for a week at a time.

I’ve quit jobs just to fish this river at the right time and I like it best in the off-season, in the winter, when the weather has driven off all the others.

This river responds to the weather and under a slate gray sky with snow flurries threatening it can boil with a hatch of monumental proportions.

Looking about you may find yourself completely alone on a favorite stretch of water with fish rising everywhere. It’s a sensation that’s hard to beat.

But even in the on-season, this river has its allure.

When it’s crawling with anglers, the competitive juices begin to boil as you wade out to an available spot and start to fish.

And when suddenly, you’re the guy who’s hooked up while all the others stand slack lined and mute, you know you have reached your peak. 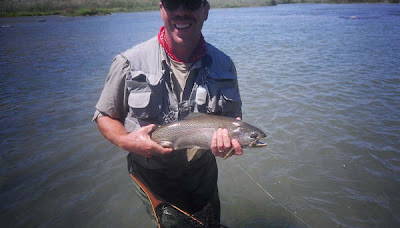 But much like the rest of New Mexico the best part of San Juan can be found on its backside, off the beaten path, over on the far bank where no one really goes.

Here you’ll find the river in all of its natural, beauty, where the heartiest of fish may lie, a place where you can escape the hoots and hollers of the vacationing Texans.

Here you can make that long, lazy, silent cast into a seam of quiet water, to wait and watch as a great head breaks the surface, opens it mouth wide and takes in your miniscule fly.

Here against all odds you may hold your set until she’s just gone under and then you raise your rod tip ever so slightly to feel the hook bite.

She might thrash a few times causing your heart to quicken before she heads out into deeper water, steadily pulling out line before turning back in an effort to fool you.

You fight to retain the tension on your line and begin wading slowly towards the fish.

This could go on for minutes before you finally reel her in close enough to feel your breath catch upon the sight of her. 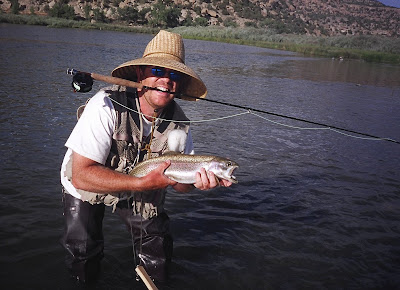 She’s big, beautiful and bawdy all right and that’s why you’re here.

It’s here that you look around and realize you’re alone on one of the best trout streams in the country, you’ve masterfully caught one of its most prized possessions and maybe, just maybe, you deserve to be here.

Then you carefully back your barbless hook from its mouth and gently release this beautiful creature back into the depths.

Hopefully you’ll have a long walk back to your vehicle, along the top of a butte under our stunning blue skies or maybe along a trail running beneath the escarpment, amidst the tracks of deer and coyote.

This way you’ll have time to relive that moment, to catalog it in your mind and cherish it later.

Because here on the San Juan River, an anglers’ fantasy can be fulfilled, especially if one seeks her hidden beauty. 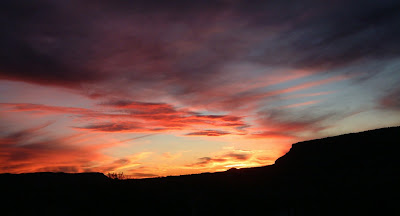