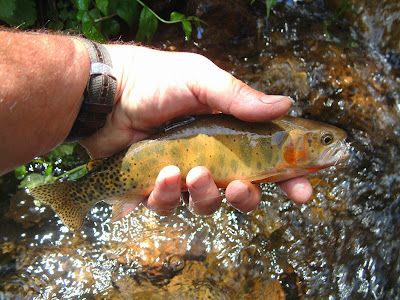 Shadows dart back and forth in the cold, clear stream here in the mountains high above the Sipapu ski valley.

They’re native cutthroat trout and their purity and abundance in Alamitos Creek could be essential to the survival of the threatened species.

That’s why the Truchas Chapter of Trout Unlimited (TU) is spearheading an effort to build a barrier to protect the population of 4,000 to 5,000 pure strain Rio Grande cutthroats living in about seven miles of the remote creek.

“They may be one of the best allies the cutthroat has,” says Juan Martinez, fisheries biologist for the Carson National Forest. “They’re instrumental in getting projects like this done.”

Due to budget restrictions, manpower limitations and the nature of the federal bureaucracy, such a project could take years for the Forest Service to implement, Martinez says.

But with assistance from the local TU chapter, funds have already been secured to pay for an environmental analysis this winter and construction late next summer if approved.

“This is a beneficial project with minimal environmental impact so it shouldn’t be a problem,” says Martinez, a Taos native with a Fisheries and Wildlife Sciences degree from New Mexico State University.

A concrete fish barrier on the stream would prevent other non-native trout such as brown or rainbow trout from infiltrating the stream and taking over the habitat.

Alamitos Creek links up with the Rio Pueblo which flows through Peñasco and on down to the Rio Grande.

For years, an aging head gate on an irrigation ditch has helped keep invading trout from moving upstream into cutthroat habitat, but a new barrier is needed to guarantee that doesn’t happen. 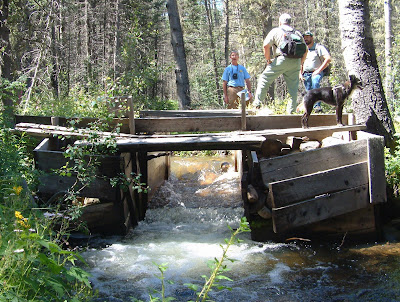 Now all that protects the Alamitos Creek purestrain population of cutthroats is a vunerable wooden, irrigation headgate.

The pure strain cutthroats in Alamitos Creek could then provide an infusion of life for other cutthroat streams such as Comanche Creek in the Valle Vidal where an ambitious cutthroat restoration project is underway, says Kirk Patten, fisheries biologist with the state Department of Game and Fish (NMDGF).

Comanche Creek will undergo a second attempt at sterilization this summer to eliminate any non-native fish that remained in about 20 miles of stream after an initial treatment last summer.

The NMDGF then hopes to restock the creek and its tributaries by next summer with pure strain Rio Grande Cutthroats.

The overall plan is to return about 120 to 150 miles of water within the Valle Vidal watershed to exclusive cutthroat habitat.

The Rio Grande cutthroat is the state’s native fish but has seen its historic range reduced to just 10 percent with only 13 core populations left in the state, Patten says.

The colorful trout at one time ranged throughout the entire Rio Grande, Pecos and Canadian rivers watershed area, covering about 6,600 miles of water in Southern Colorado and Northern New Mexico, says Patten.

The population of pure strain cutthroats in Alamitos Creek could prove invaluable in helping the native trout recover.

“It’s very important to the overall status of the restoration effort,” he says.

Eggs from Alamitos Creek cutthroats can be used to raise fry at the state’s exclusive cutthroat hatchery at Seven Springs for eventual restocking in other rivers, creeks and steams.

Some of the cutthroats can also join others stored at McClure Reservoir above Santa Fe to be used as brood stock for future breeding applications.

And others could be directly transplanted into a cutthroat stream to mingle with a resident population and increase genetic diversity, Patten says.

Patten, who coordinates the state’s Rio Grande Cutthroat Recovery Project, agrees that without the help of organizations such as Trout Unlimited some of the recovery project’s goals might be hampered.

“We’re financially challenged on some of these projects,” he said. “It’s a big help to have them come up with funds for this.”

Arnold Atkins, current president of the Truchas Chapter of Trout Unlimited, said the Alamitos Creek barrier would be the second the organization has raised funds for.

The group helped raised $100,000 needed to construct a new fish barrier on Comanche Creek on Forest Road 1950 near the confluence of Little Costilla Creek last year.

That barrier will keep non-native fish in the Costilla Creek watershed from migrating upstream into the cutthroat restoration area.

Then work started on this latest project, which is considered a top priority.

“This may be one of the largest populations of pure strain cutthroats in the state,” says Atkins, a semi-retired surgeon who grew up in the Española Valley and graduated from Los Alamos High School in 1960. “This was something that could do the most good in the shortest period of time, so we got on it.” 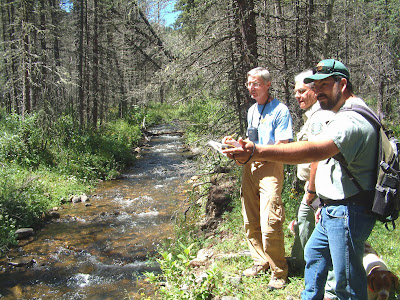 The group raised about $7,000 from its members and during its annual banquet which features raffles and auctions.

Then they approached a sister Trout Unlimited chapter in Austin, Texas, the Guadalupe River Chapter, which apparently has plenty of money but little in the way of streams to spend it on and secured another $3,000, Atkins said.

The $10,000 should cover the environmental analysis of the project which is required by law.

A fund has been established, the Rio Grande Cutthroat Restoration Fund, specifically to collect funds to be used for environmental analysis because many granting organizations will not cover these costs, Atkins said.

The Truchas chapter, in conjunction with the Forest Service and state Game and Fish, applied for and received a $50,000 grant from the Western Native Trout Initiative for the barrier’s construction.

“They ranked this as one of their most important projects,” he said.

The Rio Grande Cutthroat Restoration Project’s goal is to reduce threats to the state trout’s survival and improve its ability to prosper, says Patten.

Success of the department’s long-range plan would also nullify the need for the trout’s protection under the Federal Endangered Species Act. Such protection could result in land use and sport fishing restrictions.

The U.S. Fish and Wildlife Service (USFW) this spring filed notice of its intent to pursue listing of the trout on their threatened or endangered species list.

Success of the reintroduction effort in the Valle Vidal would go a long way towards addressing some of the USFW concerns for listing the trout, says Patten.

Much of the groundwork for that success has already been done, for example, roads have been closed off and in some cases eliminated because they cause excessive runoff and erosion that fouls waters.

Stream banks have been rebuilt and restored with native vegetation to create a healthier environment for fish to thrive. And non-native fish such as rainbow trout and white suckers have been eliminated to allow the Rio Grande cutthroats a clean start in their restored home waters.

Much of that work has involved volunteer groups such as the Truchas Chapter of Trout Unlimited, New Mexico Trout, the Quivera Coalition and the New Mexico Wildlife Federation.

Meanwhile, high in the mountains above the highway between Peñasco and Mora lies a creek teeming with cutthroats just waiting to play their role in the ongoing recovery effort. 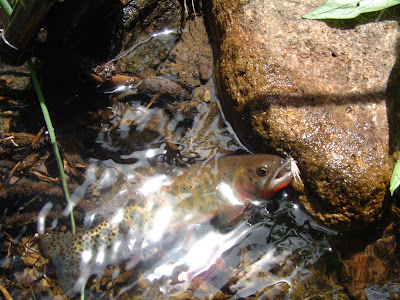 This article was originally published in the print edition of the Santa Fe New Mexican on Aug. 28, 2008.