Two Flies Only – New Rule on the San Juan River 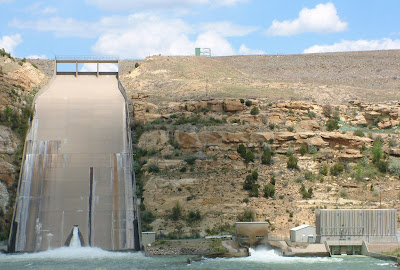 Navajo Dam ripping along at 5,000 cubic-feet-per-second (CFS). The water is scheduled to drop back down to its usual flow of about 500 CFS by early July.

Anglers are now restricted to the use of just two flies while fishing in the quality waters of New Mexico’s trophy class, blue ribbon trout stream, the San Juan River.

State Game Commissioners adopted the new rule at a May 29, 2008 meeting at San Juan College in Farmington, NM.

“We’re thrilled,” said Larry Johnson of the San Juan Guides Association and owner of the Soaring Eagle Lodge. “Anything we can do to protect the economic impact of the river is important”

Commissioners voted unanimously to adopt the new rule limiting anglers fishing in the upper four miles of the San Juan River just below Navajo Dam to the use of two flies.

Advocates for the rule change hope it will limit the number of trout inadvertently injured or killed from foul hooking by multiple hooks and entrapment in broken off lines.

Previously there was no rule limiting the number of flies an angler could use on the quality waters of the San Juan River where an estimated 70,000 trout, averaging 18-inches in length reside.

The San Guides Association in seeking the rule claimed some guides were arming clients with multiple fly rigs in order to improve their catch rate at the expense of the trout.

The association’s members reported increased sightings of injured and dead fish that they and their clients found repulsive and unsportsmen like.

Opponents to the rule argued that the multiple fly rigs, when used properly, were a traditional and accepted practice that hadn’t been scientifically proven to be harmful to fish.

A local fishermen and one San Juan outfitter spoke in opposition to the new rule at Thursday’s meeting at San Juan College in Farmington but they were outnumbered by numerous guides and businessmen who turned out in support of it.

“ A lot of the problem is barbed hooks,” said outfitter Art Martinez. “ We need to better educate the public about that.”

One of the new rule’s supporters, Tim Chavez, of Born and Raised Guides and Abe’s Motel and Fly Shop told commissioners the issue was a “no-brainer.”
“It’s a matter of sportsmanship and ethics,” he said.

Johnson, of the guides association, noted that the San Juan’s trophy class fishing contributed $25 million to the state’s economy, according to a recent study at New Mexico State University.

The angling organization, New Mexico Trout, which had initially opposed the rule change when if was first brought before the commissioners in February was not represented at Thursday’s meeting.

Commissioner Jim McClintic, also a member of New Mexico Trout, stated that the group had decided to compromise and support the rule if it was limited to just the San Juan’s quality waters.

The latest version of the rule provided commissioners with the choice of either applying it to just the quality waters or for 15-miles downstream.

McClintic made a motion to adopt the rule for just the quality waters and it was unanimously approved with commissioner Alfredo Montoya absent.

Advocates cheered the rule change outside the auditorium.

“It’s a positive move,” said Arron Carithers of Anasazi Anglers. “Anything we can do to protect the resource is positive.”

Marc Wethington, the state Department of Game and Fish’s fisheries biologist on the San Juan said he expects anglers and guides will police themselves as far as the new rule is concerned. The rule officially takes effect in mid-June.

Noticeably absent from the hearing was popular, independent, San Juan fishing guide, Jude Duran, 29, of Flora Vista, who was a outspoken opponent of the rule.

Duran remains in federal custody in Denver awaiting a detention hearing following his federal indictment on a single charge of bank robbery stemming from the May 13, 2008 holdup of a Montrose, Colo. Bank. Duran faces up to 20-years in prison if convicted, according to Jeff Dorschner, spokesmen for the U.S. Attorney’s Office in Denver.

In his presentation before the commissioners, Wethington unveiled research showing the San Juan River’s trout population sustains up to 200,000 hours of fishing annually with a fish caught about once an hour and a trout over 20-inches or more taken about 8-percent of the time.

The river see most of its angling action from out-of-staters and 95-percent of anglers on the river practice catch and release.

The San Juan is one of the West’s top trout waters, a legendary, trophy-class trout fishery fueled by consistent flows and clear, cold water.

The river lures anglers from all over the world to fish its quality waters.

The use of barbless hooks on flies is required in the quality waters.

Below the quality waters, anglers can use bait and the normal bag limit is in effect on public access to another 3.5 miles of the San Juan River including the Cottonwood Campground area.