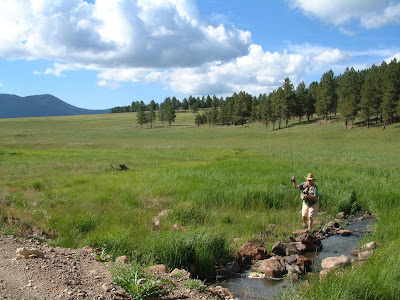 The Valles Caldera National Preserve has opened the East Fork of the Jemez River to fishing by reservation and for a fee.

The new program is more flexible than the lottery system already in place for those who want to fish the Rio San Antonio on the backside of the sprawling ranch located between Los Alamos and Jemez Springs on State Road 4, says Preserve Manager Dennis Trujillo.

Customers can now spend a day on the front half of the 89,000-acre ranch, stalking trout in about 10 miles of stream including the East Fork of the Jemez River and Jaramillo Creek, he said.

Ten reservation slots are available daily, six for the public and four for preserve-approved guides and the cost to the public is $50 for a day’s access and fishing and $125 for guides’ clients, Trujillo said.

Interested anglers can reserve slots online for a future date or call the preserve at (505) 670-1612 or drop by to see if any slots remain unfilled on any given day.

Fishing is catch and release with barbless hooks, no waders of nets allowed to protect against whirling disease. Pets are not allowed.

Anglers can then hike in and fish anywhere they want on the East Fork of the Jemez River and Jaramillo Creek anytime between 7 a.m. and 5 p.m. and will share the water with their fellow anglers.

“It offers more flexibility for the customer,” Trujillo said.

In contrast, the San Antonio fishing program relegates anglers to a “beat” or section of the stream about a mile or so long with no swapping of beats allowed.

Fishing is catch and release with barbless hooks, no waders of nets allowed and a bag limit of five fish.

San Antonio anglers are also ferried to their assigned location on the river and must remain there until picked up by a preserve employee or volunteer.

The author and a fishing partner, former Albuquerque Tribune fishing columnist and Rio Grande Sun reporter, Glenn May, were recently granted access to try out the fishing on the ranch formerly known as the Baca.

Purchased by the federal government from the Dunigan family of Texas in 2000 for a little over a $100 million, the preserve is mandated to operate as a working ranch with public access and become self sufficient by 2015.

According to its latest report to Congress the preserve was budgeted $3.5 million in 2007 for operations, earned $750,000 from its recreation and other programs and saw about 12,000 visitors that year.

See the preserves’ website at www.vallescaldera.gov for more information about its operations.

Driving through the early morning fog as elk bounded across the gravel road, we couldn’t help but be struck by the beauty of the ranch, its wildlife and scenery. 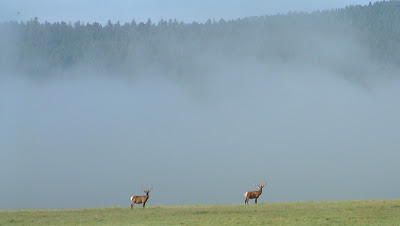 Coming around a corner as we searched for the headwaters of the East Fork we encountered two bull elk staring us down, their velvet covered racks impressively highlighted by the mist behind them.

At another point a wary coyote ran up a hillside, constantly looking over its shoulder as it headed for safety.

And elk herds hung out in the tree line, gazing down at us before slowly disappearing into the shade.

We never did find the headwaters of the East Fork but we did stumble across little Jaramillo Creek meandering through the tall grass.

And a few casts in a pool by the road produced strikes from one of its residents.
On to the lower East Fork of the Jemez River we choose a stretch between the parking area and the front gate. We felt rushed as menacing thunderclouds loomed overhead and the possibility of lightning advanced.

Fighting through relentless swarms of painful deer flies and eager strikes from chubs sharing this slow moving, shallow stretch of creek, May caught and released a nice, 14-inch rainbow trout while I picked up a smaller version upstream. 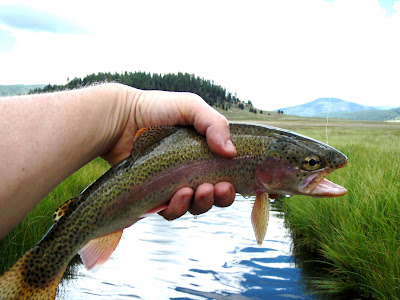 Photo courtesy of Glenn F. May.

Trujillo says the stream is chock full of 8- to 12-inch average sized fish with some bigger ones in the lower stretch of the stream and some anglers have reported 50 fish days.

May noted one might have similar luck on other public streams for far less money but concluded it was the scenery that really made it worth the trip.

“This would be a great gift to give someone who loves the outdoors and fishes,” he said.

And perhaps that’s really what makes the Valles Caldera so unique, it’s a special treat to visit and enjoy for a day.

From Santa Fe head north on US84/285 to Pojoaque and take State Road 502 to White Rock and then follow State Road 4 up through the mountains and upon emerging into a great, open area look for the entrance to the preserve on your right, about 65 miles. A much longer but scenic round trip involves heading south on I-25 to Bernalillo and taking State Road 550 west to the State Road 4 turnoff at San Ysidro, passing through Jemez Pueblo, Jemez Springs and La Cueva to the preserve and then heading back to Santa Fe through White Rock and Pojoaque, about 170 miles.

This article also appeared in what was the last edition of the Santa Fe New Mexican’s Outdoors section which has since been eliminated along with several other sections as a cost cutting measure.