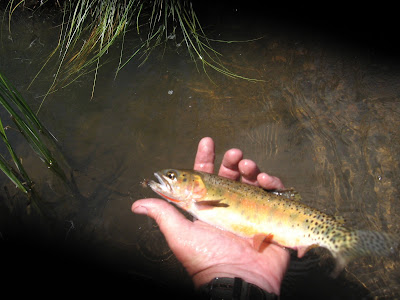 State Department of Game and Fish staff are back in the Valle Vidal and Vermejo Park this summer for another shot at sterilizing streams to be restocked later with native Rio Grande cutthroat trout.

Crews in August will be re-treating about 20 miles of Comanche Creek and its tributaries north of the newly installed fish barrier on Forest Road 1950 near the confluence of Little Costilla Creek, said Kirk Patten, fisheries biologist for the state Department of Game and Fish.

Last summer, the creek’s fish population underwent unlimited angler harvesting, physical removal through electro-shocking and then an application of the chemical rotenone to poison any remaining fish in an attempt to sanitize the creek for restocking with pure-strain, native, Rio Grande cutthroat trout.

But numerous fish survived the onslaught, requiring yet another attempt to eradicate the last of any remaining non-natives, Patten said.

Patten, coordinator of the state’s Rio Grande cutthroat restoration effort, said it is not unusual to require repeated attempts at clearing a stream before it can be declared fit for restocking.

“The hope was we could put fish back in this fall,” he said. “But it’s more likely we won’t stock until next summer.”

“There’s plenty of fish in there,” he said. 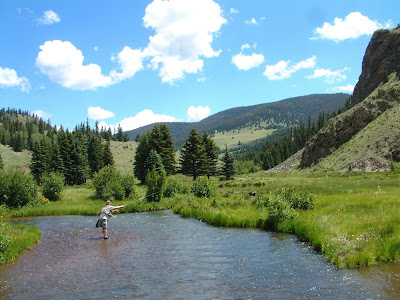 An angler fishes at the confluence of the Rio Costilla and Comanche Creek.

Crews will also be heading back into Ted Turner’s Vermejo Park ranch adjacent to the Valle Vidal to re-treat another stretch of stream that had been previously cleared and restocked with what were supposed to have been pure-strain cutthroats.

But after restocking the stream with trout from the state’s cutthroat hatchery at Seven Springs, Turner ranch personnel reported finding a cross- breed of rainbow and cutthroat trout known as a “cutbow” inhabiting the stream.

Turner has long pursued his own wildlife conservation and reintroduction efforts on his private ranches and is cooperating with state Game and Fish officials to reintroduce the cutthroat throughout the shared watershed in the Valle Vidal area.

Mike Sloan, chief of the Fisheries Division for the state, told state game commissioners at a November 2007 meeting in Raton that rainbow trout were used to test the Seven Springs Cutthroat Hatchery before it came online and some of those were undetected and apparently got mixed in with the cutthroats delivered to Turner’s ranch.

The department has since taken a number of measures to ensure that its brood stock of cutthroat trout remains pure and no more mix-ups occur, Patten said.

The department efforts include keeping a population of its cutthroat brood stock in Santa Fe’s protected reservoirs and raising their young at the cutthroat-only hatchery at Seven Springs in the Jemez Mountains.

The effort is part of an ambitious, overall restoration plan to return the state’s native fish to its historic ranges, such as the Valle Vidal watershed. 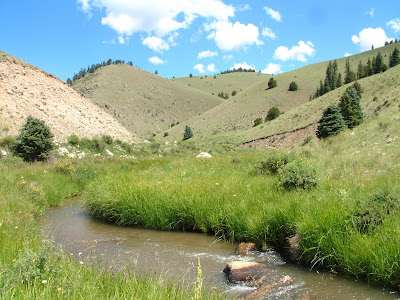 Comanche Creek in the Valle Vidal.

Competition from non-native fish, such as rainbow and brown trout; environmental impacts such as mining, logging and cattle grazing; and human development have reduced the trout’s habitat to about 10 percent of its native range with only 13 core populations left in the state.

The state’s goal is to reduce threats to the Rio Grande cutthroat trout’s survival and improve its ability to prosper, Patten said.

Success of the department’s long-range plan would also nullify the need for the trout’s protection under the Federal Endangered Species Act, which could result in land-use and sport-fishing restrictions.

The U.S. Fish and Wildlife Service in May filed notice of its intent to pursue listing of the trout on its threatened or endangered species list.

Success of the reintroduction effort in the Valle Vidal would go a long way toward addressing some of the agency’s concerns for listing the trout, Patten said.

Much of the groundwork for that success has already been greatly enhanced by habitat work done on Comanche Creek and the surrounding countryside.

Roads are nearly closed off or, in some cases, roads that cause excessive runoff and erosion that fouls waters have been eliminated.

Stream banks have been rebuilt and restored with native vegetation to create a healthier environment for fish to thrive. And non-native fish such as rainbow trout and white suckers have been eliminated to allow the Rio Grande cutthroats a clean start in their restored home waters.

Much of that work has involved volunteer groups such as the Truchas Chapter of Trout Unlimited, New Mexico Trout, the Quivera Coalition and the New Mexico Wildlife Federation.