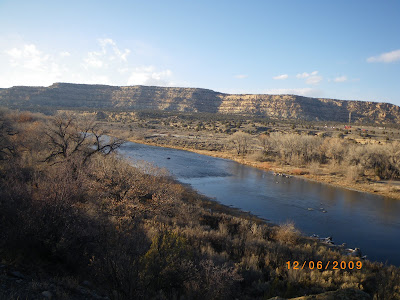 Despite a change of state employee furlough dates Navajo Lake and the quality waters of the San Juan River will still be closed for five days in the next four months beginning with a shut down on Thursday, Christmas Eve Day and again on Friday, Jan. 15, 2010.

Three other days furlough dates have since been changed to allow the parks to close on several Tuesdays in February and March while all other state employees will continue to be furloughed over several Fridays in March, April and May.

The changes were made to allow parks across the state to remain open during busy weekends and holidays.

Yet perhaps nowhere will the impact of the closures be felt more, regardless of the dates,than in the small community of Navajo Dam where virtually every business in town is dependant upon Navajo Lake state park for their livelihood.

The park and its year-round, trophy-class trout fishery draws anglers from all over the world and contributes an estimated $30 million to the state’s economy annually.

But many businesses including fishing guides, fly shops, hotels and restaurants are also being forced to take Christmas Eve day off along with the state’s employees because of the state’s furlough plan.

The park and 34 others across the state will be closed a total of five days in the next four months and any day the river and the lake at Navajo Dam are closed essentially puts locals out of business.

“It’s just plain stupid,” says Chuck Rizuto, one of the longest serving guides on the river and owner of a lodge, fly shop and guide service. “They haven’t even bothered to think about what this will do to our tourism.”

What Rizuto finds particularly galling is the fact that the park will have a skeleton crew on duty on Thursday to keep people out.

And then the following morning on Christmas Day they’ll have another skeleton crew come back in to open the park gates again.

“It just doesn’t make sense,” he says. “Why not just leave it open if they’re going to have to these guys down there anyhow.”

And that’s the problem many who work on the San Juan River are having with the state’s furlough plan.

“This is ridiculous,” says Larry Johnson of the San Juan River Guides Association. “If anybody in private business ran things this way they’d go broke.”

Johnson, in a letter to state parks director, Dave Simon, said he understood the state’s need to reduce costs in the face of budget shortfalls.

But Johnson argued that the closing of the state park which includes Navajo Lake and the quality waters of the San Juan River will not only cost the state much needed revenue from lost user’s fees, but also harm local businesses dependent upon park visitors for income.

“I don’t understand why they can’t just keep the park open with a skeleton crew instead of closing it for an entire day,” Johnson said.

That’s exactly what they’re doing in Colorado where state employee furloughs have also been ordered to cut costs due to budget shortfalls.

“Our state parks are a part of everyday life for many people here,” said Deb Frazier, spokeswoman for Colorado State Parks. “And it seemed to us that the best solution was to keep them open with skeleton crews on duty.”

And that’s exactly what Johnson and others on the San Juan River have been lobbying New Mexico’s State Parks to do.

“I’m aware of and share the concerns of the guides and businesses on the San Juan,” Dave Simon, Director of State Parks says. “I sympathize with them but that (skeleton crews) wasn’t an option that was made available to us.”

Simon says he never spoke directly to Richardson about the furlough plan but that his boss, Secretary of Energy Minerals and Natural Resources, Joanna Prukop, argued his agency’s case for keeping the parks open.

Prukop was unavailable for comment and is slated to retire Dec. 31st.

Simon says his understanding of the situation was that Governor Richardson wanted to reduce the “complexity” of the furlough plan, which is why the state parks weren’t allowed to use skeleton crews to keep them open.

Simon says his understanding of the furlough plan was it was designed to maximize savings by having as many state employees off, and their offices closed, on the furlough days.

The plan is estimated to save the state about $11 million while the overall budget shortfall is pegged somewhere at about $650 million.

The governor’s spokesman, Gilbert Gallegos, said the governor’s furlough plan was devised to limit exceptions to the rules but he praised Richardson’s willingness to allow the state parks to close on alternate days to reduce the impact of the shut down.

There were to be few if any exceptions to the plan except for situations impacting the public’s health, safety and welfare, Gallegos Said.

Gallegos declined to address questions regarding why staggered schedules couldn’t be employed to allow the state parks to remain open with skeleton crews in place.

“I don’t have anything more to add, except this: Had Governor Richardson signed the budget proposal passed by the Legislature during the special session, the state would have had to close state parks, which would have had a truly devastating impact on local economies,” Gallegos wrote in response to questions submitted by Outdoors New Mexico .

The governor’s original furlough plan called for most of the closings to fall on Fridays before other holidays thus creating four day weekends for furloughed state employees.

But the original plan came at a great inconvenience to the public.

For instance, a park such as Elephant Butte Lake State Park, which sees upwards of 100,000 visitors over the Memorial Day weekend would have been closed to early birds who showed up on Friday to find a camp site.

Gallegos said Richardson showed “great flexibility” in allowing state parks to change their closure dates to allow the parks to close on Tuesdays in February and March instead, while the rest of the state employees had to adhere to the other schedule.

But some businessmen at Navajo Dam find the alternate schedule of little consolation considering that any day the river and lake is closed they’re essentially out of business.

“I book some of my biggest trips in March, during the week,” says Rizuto. “That’s when most out-of-state tourists want to come, to avoid the weekend crowds. What am I supposed to tell them, the river’s closed for a day?”

Many Navajo Dam Businesses were equally upset that much of the planning for the closures was kept under wraps and done without public involvement (see related story ).

Sen. Steve Scharer, R-San Juan says the state parks and businesses at Navajo Dam are simply pawns in the governor’s ongoing battle with the legislature over the budget.

“This just another case of his total disregard for the citizens,” he said. “He doesn’t care about them. It’s all about him.”

Scharer said that by closing revenue generating state parks and doing the same to related businesses is counterproductive to the state’s economy and senseless considering the minimal budget savings it produces.

The furloughs are another in a series of moves crafted by Richardson to address the budget shortfall including a state hiring freeze, layoffs of political appointees and suspension of all capital outlay spending including his own $250,000 allocation for habitat improvement projects on the San Juan River at Navajo Dam.

That money was earmarked for a diversion at Rex Smith Wash at Texas Hole to keep silt and sediment from washing into the river and destroying fish habitat.

The Governor’s furlough plan comes on the heels of his veto of a legislative budget fix offered during a special session last fall including a 7.6-percent across the board budget cut and a reduction of politically appointed positions within state government.

In the meantime state park rangers will be on duty during the state park closure dates to keep trespassers out and will issue citations if necessary, Simon says.

Anyone convicted of criminal trespass while hunting or fishing could see their fishing privileges administratively revoked for up to three years.

SANTA FE- Governor Richardson today announced that all New Mexico State Parks will
remain open during the remainder of state employee furlough days. Governor Richardson
announced the change after receiving dozens of requests from New Mexico residents, local
municipalities and businesses asking to keep parks open because of concerns about the negative
economic impact closures could have on local economies.

“New Mexico State Parks offer fabulous scenery, a variety of family-friendly activities and are
great tourist magnets that drive economic development in our local communities,” Governor
Richardson said. “This plan will not only enable the state to continue saving money but will keep
our parks open for everyone to enjoy.”

Listening to constituent concerns, Governor Richardson worked with State Parks and the State
Personnel Office to come up with the plan that will still require State Park employees to take
three remaining furlough days. Those employees who are needed to work to keep parks open on
designated furlough days, will be required to take alternate furlough days.
##

Posted under Uncategorized
Comments Off on Dates Change, Plan Stays the Same, San Juan River and Navajo Lake to Close