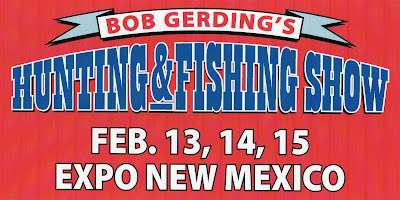 If you like the outdoors then you don’t want to miss Bob Gerding’s Outdoor Adventures annual Hunting and Fishing Show next weekend at the Fairgrounds in Albuquerque.

“With the economy we’re concentrating on staying close to home this year,” Gerding says of his 11th annual show. “So we’ve got a lot more local and regional exhibitors and many are offering great deals.”

Admission is $7 for adults while kids under 12-years-old get in for free. Parking on the grounds is $4.

And there’ll be plenty to keep the kids busy while Mom and Dad are chatting up the exhibitors including a rock-climbing wall, a BB gun shooting range supervised by hunter safety instructors and face painting, Gerding says.

Adults can try their hand at shooting a single action pistol, rifle or shotgun or learn to cast a fly rod in the casting pool.

Folks will be able to check out the latest equipment including recreational vehicles, boats and all-terrain vehicles.

“And we’ll have a guy I’ve been trying to get down here for years who sells outdoor gear bags, backpacks and duffel bags at really reasonable prices,” Gerding says.

And with Valentine’s Day being celebrated there’ll be plenty of gifts available for the ladies too including jewelry and beauty products from Martha’s Body Bueno of Albuquerque, Gerding says.

There’ll be over 90 exhibitors including knife makers, cooking ware demonstrators, makers of unique outdoor clothing and taxidermists, including one who will mount a complete deer over the course of the show. 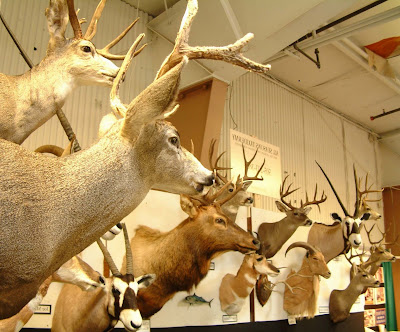 Seminars will include a presentation by Stephen Ausherman, author of “60 hikes within 60 miles of Albuquerque” and Colleen Sloan of Log Cabin Grub, a noted outdoor cook and specialist with the Dutch oven who will share some of her culinary secrets, Gerding said.

Most exhibitors will also be conducting raffles for all sorts of gifts including hunting and fishing trips or equipment like fly rods or float tubes, Gerding says.

And door prizes to be given away will include a guided Tiger Muskie fishing trip to either Bluewater or Quemado Lake with Bob and T.J. Trout of 94-Rock.

A weekend getaway including two nights stay at the Elk Horn Lodge in Chama and a trip on the Cumbres and Toltec Rail Road will be awarded to some lucky ticket holder too, Gerding says.

And a two night stay at the San Juan’s River’s newest lodge, Ayalas, will also be given away to some lucky angler, he added.

There’ll be officers with the state Department of Game and Fish will be on hand to advise the public about hunting and fishing regulations and answer any other questions.

And many of the state’s sportsmen’s groups and other outdoor related, non-profits will be on hand to educate and inform the public. 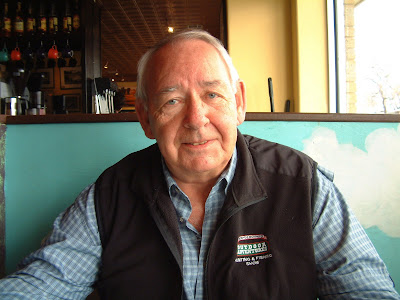 “I just love it, these are my people,” Gerding, 70, of Albuquerque says.” It’s like a family reunion. It’s fun work.”

Gerding’s family and friends are all involved in making the show work, as are many of the business associates he’s come to know over his years from his work in the outdoor arena.

You may know Gerding from his deep, distinctive voice, tall stature and mane of silver hair.

He’s even done some voice-over work for commercials over the years.
Gerding says he ended up on the bawdy, heavy metal, radio show because the popular DJ, T.J. Trout, likes to fish.

Gerding got the idea for the annual hunting and fishing show while attending outdoor shows in Arizona and Colorado where he was marketing a book.

He decided it was time to find a show closer to home and the idea was born.

The shows have proven to be very popular with up to 7,000 people attending last year, he said.

Gerding is a longtime Albuquerque resident who graduated Highland High School. He holds a business degree from the University of New Mexico where he has been named to the Anderson School of Business’ Hall of Fame.

Gerding and his wife, Harriet, a retired financial advisor, have two sons, Patrick, of Phoenix and Mike, of Denver, both of whom work in the business field.

A daughter, Laura, died at the age of 40 due to breast cancer, Gerding said.

He has a twin, Dick, a Farmington attorney whose likeness to his brother has come in handy on occasion. 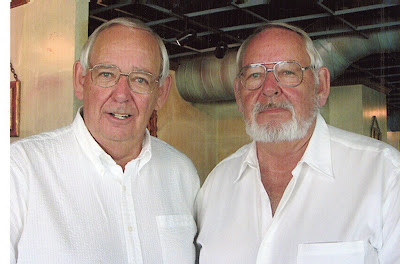 From left to right, brother’s Dick and Bob Gerding in 2008.

“I’ve had him fill in for me once,” Gerding says of an instance involving a family emergency. “He did some live (television) interviews and nobody knew the difference.”

Gerding said he and his brother took an interest in the outdoors as kids and their dad accommodated them with vacations to places like the Brazos River near Chama.

There the boys learned to fish from mentors like an elderly spinster from Albuquerque who took summers off from her job as a bookkeeper to relax and fish on the river.

Gerding said in those days they learned to fish with worms, salmon eggs and flies like a gray-hackled peacock or the Rio Grande King.

Inevitably, they stuck to fly-fishing out of pure laziness because it was easier than baiting a hook all the time, Gerding said.

Gerding said he liked that job because he got to fish twice a day, once in the morning while the clients were getting ready to go out and later in the evening while they were all at happy hour.

He turned out to be such a good fisherman that one of his additional duties was to provide trout for the traditional Friday night fish fry, Gerding said.

And while fly-fishing might be a very popular outdoor pursuit today, it wasn’t always so, Gerding said.

It was a little known fishing method back when he was a youth, he said.

“I’d be fishing down on the Rio Grande by the Taos Junction bridge and people on the road would stop just to watch,” he said. “I’d draw a crowd.”

Then fly-fishing really took off after the Robert Redford’s movie “A River Runs Through It” came out in the 1990s, Gerding said.

The yuppie era’s lifestyle and affluence also helped fuel interest in fly-fishing and other outdoor recreational pursuits, he added.

Gerding figures he’s taught over 2,000 people how to fish during the course of his career. 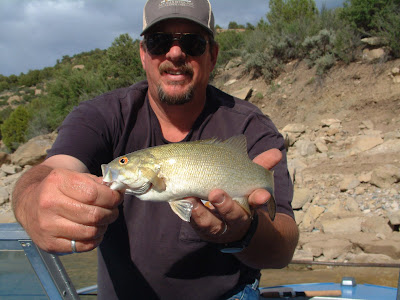 The author shows off one of Navajo Lake’s “Future Hall of Famers”, a fiesty, little smallmouth bass caught in the spring of 2008.

Take I-25 south to Albuquerque, get off at the Louisiana exit and follow it down to Lomas, turn right and head down to San Pedro, take a left and head down to the fairgrounds (now called Expo New Mexico). If to hit Central, you’ve gone to far. The show begins at noon on Friday, Feb 13th and runs until 7 p.m. It picks back again on Saturday, Feb. 14th,(Valentines Day) starting at 9 a.m. and continuing until 6 p.m. and then again on Sunday, Feb. 15th, from 9 a.m. to 5 p.m. Admission is $7 for adults and kids under 12 years old get in for free. Parking at the fairgrounds is $4.

Posted under Uncategorized
Comments Off on Don’t MIss the Big Event !