Fly Fishing on a Bubble – What a Hoot! 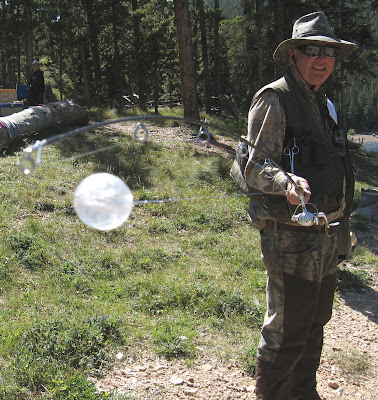 This summer I was invited up to the lake to do some fly fishing with some good ole boys I know from Missouri.

But I balked at the thought of blowing out my arm trying to cast to rising fish just out of my reach.

We’ll be fly fishing “hillbilly” style, with a bubble and a spin casting rig, that is.

Knowing I was about to enjoy some fine company, even better camp cooking and lots of good fishing, I was digging out my bass rod in no time.

Now when I first got into fly fishing I’d had the occasion to meet an older, Hispanic, gentleman from Taos up at Shuree Ponds on the Valle Vidal in Northern New Mexico.

He was tying up Wooley Boogers off the back of his old Jeep so he could go after one of those lunkers the boys from state Game and Fish like to stock up there.

He swore you couldn’t beat dangling one of his boogers below a bubble if you were serious about catching one of those big, high country fish.

But I was new to the game then and lacked a spin casting rig so I spent my time and effort making long laborious casts with a fly rod and watching as my caddis fly landed just out of reach of some big risers.

Now, I’m not saying you can’t catch fish at the lake with a fly rod but it requires a long leader and incredible diligence, squinting at your fly out there on the still water and waiting, always waiting, for that strike to come.

And sometimes the wait pays off, like the time I took a moment to clamp the rod handle between my teeth so I could free up my hands to unzip my pants and take a much needed whiz.

As I’m fumbled about in my shorts, I saw a snout break the surface to sip at my fly.

I whipped my head back in a futile attempt to hook him and watched as he dove out of sight.

Self induced whiplash, a blown out shoulder and too many near misses diminished my enthusiasm for fly fishing on lakes and I only indulged when necessary.

But now I’ve seen the error of my ways since meeting up with the Davis brothers at the River’s End Campground at Taylor Reservoir in Colorado this summer. 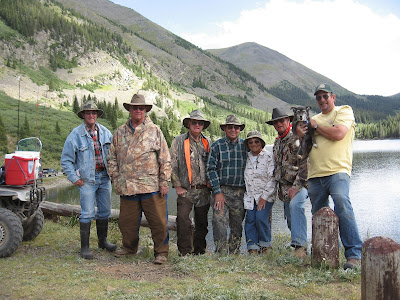 From left to right: James Davis, 72, of Coldwater Mo. is a retired manufacturing maintainance technician. Bud Davis,70, is a retired trucking company manager who lives in Jackson, Mo.. Raymond Davis, 66, of Imperial Mo. is also retired from the trucking business. Edward Page, 69, retired from the automotive industry and his wife Ellie, a homemaker,live in Scroggins Tx. They are cousins to the Davis family. Eddie Davis,63, of Patterson Mo. is a retired school teacher. The Davis brothers all teach Sunday school and are avid hunters, anglers and cooks. The author with his trusty dog, Wiley, 17, of La Cueva, N.M.

I happened across these camo clad, back slapping, good ole boys during a roadtrip to fish the Taylor River’s trophy waters last year. I was up there to see how some of our neighbor’s tail waters stacked up against New Mexico’s legendary San Juan River.

And boy was I happy I did (see related article).

So when they invited me back again this year I quickly emptied the spare change jar and left the sweltering, summer days of Santa Fe behind.

I arrived to cool mountain temps, afternoon thunderstorms and a hearty welcome.

I would be fishing with my Abu Garcia, Cardinal 100, a six and half foot long, medium action rod with a factory matched, five ball bearing, #102 spinning reel.

I picked it up one day while wandering around the Sportsmen’s Warehouse in Albuquerque. I was there hunting for a general purpose spinning rod for bass fishing and upon seeing the huge selection available, I asked a fellow customer, who looked like he knew what he was doing, to pick out a good rig for me.

He did and I’ve been happily hauling in bass and walleye from the boat ever since.

But fishing for trout with it was something new and the first thing Ray Davis did was hook me up with some new line on my reel, Mr. Crappie, six-pound test , camo line from Bass Pro Shops.

We then threaded the line through a medium sized, clear, plastic bubble and then added a swivel, making sure it moved freely in the mouth of the fat end of stem inside the bubble. 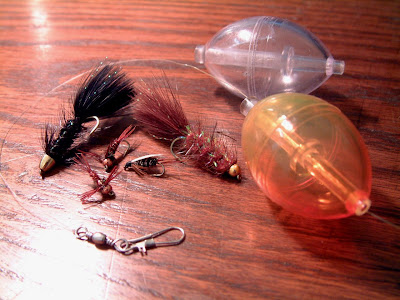 You fill the bubble up by pushing the skinny tip of the stem back inside the bubble, I used the flat blade of my knife to push down on it.

Fill it about half way or for even longer casts, about three quarters full. Jam the stem back into place in the hole and you’re done. Keep in mind that you’ll have less flotation and won’t be able to see the bubble on the water as well, the fuller it is.

And the length of line you use to attach your fly will depend on the fishing conditions but as a rule we just peeled off a piece of line about the length of our outstretched arms and tied the fly to one end and made a small loop knot in the other and hooked that to the swivel.

I found it helped to cut this piece of line off the spool before attaching the bubble.

I also found casting side arm really heaved it out there with less slack line to reel up but I also enjoyed watching the rig fly like a mortar shell when I lobbed it overhand out in front of me.

Once the bubbles sets down, reel in the slack until you see the bubble shimmy on the water and the line grows tight, then slowly, with the rod tip down and pointed in the direction of the bubble or just off to the side, reel it in, stopping occasionally to let it settle or to jig it a little. 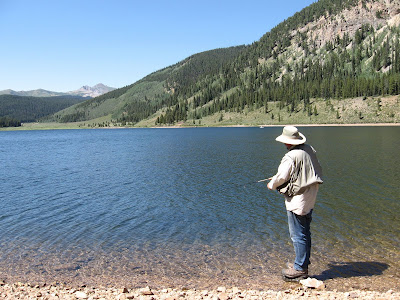 Strikes on the bubble are subtle and many times I felt a slight tug or bump on the line but found they were long gone before I could set the hook.

You have to develop a feel for the fish and need quick reaction to set the hook I was told – a number of times.
Gazing off at the surrounding mountaintops as the clouds rolled over and bird watching didn’t help my fishing success either.

But during our trip to a Mirror Lake above the little mining town of Tin Cup – a scene straight out of a Clint Eastwood western – our group of seven caught and released well over a hundred stocker rainbows and wild brookies while fishing on the bubble.

Most were hooked on the lip and released with no harm done.

And during much of that time you could hear Bud Davis crooning into his walkie talkie, “fire in the hole, there’s another one on Moffatt’s high country special.”

My winged, pheasant tail, bead head, nymph proved to be deadly on that trip and tying up some for the group earned me plenty of accolades and my breakfast in the morning. 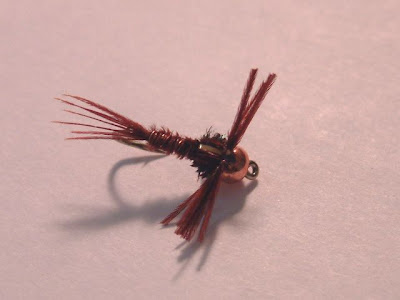 Now I’ve just got to get back up to Shuree Ponds before the season ends and see if those Wooley Boogers on a bubble really work.

One Response to Fly Fishing on a Bubble – What a Hoot!