Head East to Lake Sumner for a Winter Angling Oasis 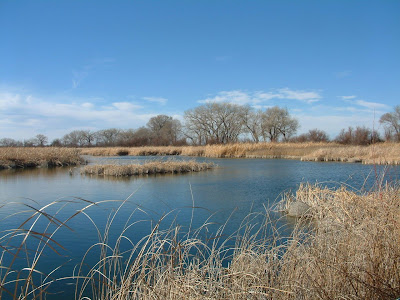 Bosque Redondo Lake is a pretty place to stop on the way to Sumner Lake.

It was the only bright spot in what was otherwise a dismal, mid-winter, fishing report.

The walleye were supposed to be biting out at Sumner Lake, a little known fishing hole far out on the plains of Eastern New Mexico.

A high-pressure system had been parked over the state for a whole week and daily temperatures were soaring into the sixties, sunshine was abundant and the winds were nowhere to be found.

It was too much for me to handle as I muddled through another day of home schooling in website design, digital photo editing and everything else I needed to know to survive my transition to the new media.

I squirmed as I dialed up my wife’s office and begged her for permission to flee.

Once she heard my whining she was all too happy to send me packing.

I was out the door and down the road within minutes, a tuna fish sandwich in hand and my trusty dog, Wiley, nipping at my heels.

I’d never been out to Fort Sumner before despite having lived and traveled throughout the state for close to 30 years.

I was too busy chasing trout, women and work back then.

But now that I’ve settled down some and learned the joys of warm water fishing, I’ve discovered a whole new slate of fishing holes to explore.

But my wife, Wren, suggested that if I was going out that way I needed to stop and see the state’s Bosque Redondo Memorial near Fort Sumner first.

As a reporter with the Farmington Daily Times, she was a member of a three-person team that earned an E. H. Shaffer award for investigative coverage of the Army’s 1860s’ forced march of many Navajos from their homelands in the Four Corners to an ill-suited reservation by the Pecos River. 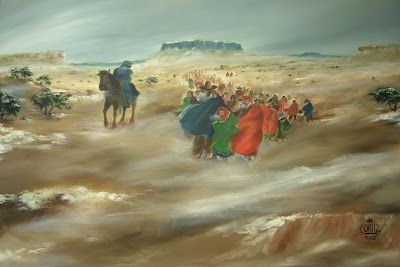 Painting of “The Journey of Despair” by artist Carlos Ortiz at the Bosque Redondo Memorial at Forst Sumner State Monument.

Being a longtime student of history, I knew I’d want to stop at the memorial so I decided to take my time and enjoy the drive, bask in the remarkable weather and take in some scenery too.

Heading east out of Santa Fe on I-25, I jumped off at U.S. 285 south and proceeded south along a two lane ribbon of blacktop through cattle country.

Bordered by tawny, juniper and piñon studded pastures and the occasional red rocked butte, I found myself humming the “Rawhide” theme song, as I ripped down the road.

Some 50 miles later I rolled into the truck stop straddling I-40 at Clines Corner.

Gas was thirty cents a gallon more here and a quart of oil set me back something like five bucks, but the gift shop had the most amazing assortment of New Mexico trinkets I’d ever seen, so it was a wash.

I’d have to remember this place come Christmas time, I thought to myself as I headed over the interstate and continued south on 285. 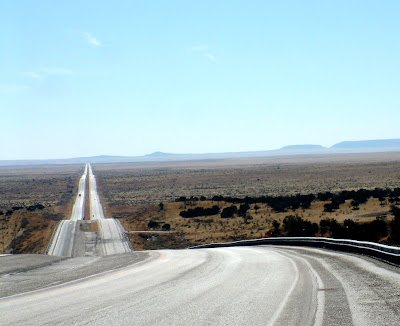 Here the road opens up to two lanes each way and runs through some long, fast, flat stretches.

By now I’m listening to AM radio and the last of the right wing pundits who still don’t get it.

Thirty miles later I hit US 60 at the neat, little town of Encino and head east again, chasing a long freight train strung out along the plains.

At one point I jump off the highway and bounce down a narrow, rocky, two track heading down to the tracks. I’m hoping I’ll be able to get a closeup picture of the lead engine bearing down the tracks toward me.

I arrived in a cloud of dust but I am just a few seconds too late. I could only watch as the cars lumbered by, the ground quivering under my feet as I take the opportunity to piss in the sand.

With the tinny squeal of the tracks fading, I lean against my little Jap Jeep and let the silence of the plains envelope me.

Out here the sweeping, uninterrupted grasslands dominate the faded, blue horizon, the only interruption, an occasional speck of a far off head of cattle.

I think what a bummer it would be to have to walk anywhere from here.

Back on the highway I soon cover the 20 miles to the town of Vaughn, a once thriving little railroad town that now looks like its just barely hanging on.

Here two rail lines intersect with one heading northeast and the other jogging south and later east again.

I continue east across the flatlands for a 60-mile dash to Fort Sumner, having lost my companion train to the countryside. But the map shows the tracks reconnecting with the roadway at the little town of Yeso.

I’ll stop here for lunch and get my picture.

I park behind what looks like an old hotel and what had once been the post office.

Leafless elms stand like silent sentries around the run down property. A lone wall made of small rocks leans precariously at an adjoining ruin.

Here I eat my sandwich as a light breeze plays through the open window, the dog leans out, reading the wind and then stares at me and my sandwich for a while.

I give her a potato chip, she bites it and it explodes across the seat.

The train finally arrives and I get my picture, once again enjoying the thrill of standing close to the thundering train as it screeches down the rails. 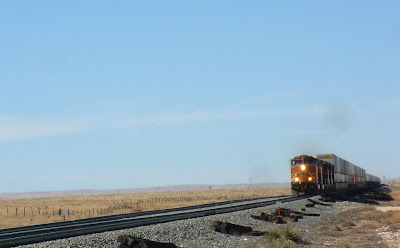 The conductor rewards my attendance with an extra blast of his lonesome sounding horn.

I return to my seat behind the wheel and shoot a picture of an empty rock house across the road. I wonder who lived here, what did they do and where have they gone?

The plains and abandoned buildings of Eastern New Mexico do that to you, make you stop and wonder.

I finally roll into Fort Sumner, visit their pretty little town hall on the hill, find the old railroad station, stop in at the Billy the Kid Museum for directions, check out his gravesite at another location and then make it over to the memorial.

The parking lot is empty but I can see they’re doing some construction inside so I walk into the building only to find the gift shop closed and no one around.

A lady comes out of a back office and says I can look around but I don’t have to pay because of all the inconveniences of the construction.

I read all the interpretive boards and feel ashamed to be white as I leave the place.

No wonder the Indians act the way they do sometimes, I think to myself.

I sure hope they bring a lot of kids here. Wren was right, we all need to see this. 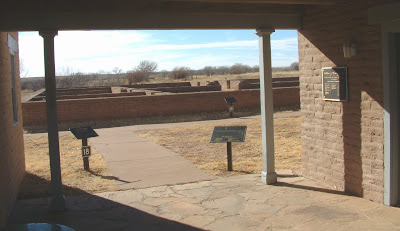 The Fort Sumner museum at the Bosque Redondo memorial.

I take a quick detour to the Bosque Redondo Lake before heading off to Sumner Lake.

It looks like a great place to hide out for an afternoon and the sign says it’s stocked with 14- to 16-inch catfish with a bag limit of two.

The smell of cattle is thick along this bottomland, with little farms and pastures bordering the road leading back to town.

I finally made it out to Sumner Lake late in the afternoon, passing along the way a windmill farm, way off in the distance, gently producing electricity and hope.

“This is one of the best places for bank fishing and taking the kids,” Shawn Denny, Southeast Area Fisheries Manager for the state Department of Game and Fish says of Sumner Lake. “You can almost always catch something here.”

Sumner Lake has one of the highest fish densities in the state, second only to Caballo Reservoir and is well stocked with walleye, a particularly aggressive fish, a fine fighter and tasty too, Denny says.

Anglers will also find good populations of large and small mouth bass and crappie too, he added.

Denny is a 1995 New Mexico State University graduate with a degree in Fisheries and Wildlife Management. He has been with the Department of Game and Fish for the past 12 years and has been the Southeast Area Fisheries Manager since 2001. He works out of the Roswell Office.

Denny says the primary food source for fish in the lake is crawdads.

“And with the warmer weather it won’t be long before they’ll be moving around and getting up into the shallows,” Denny said. “Then you’ll be able to really whack them (the fish).”

Denny says if the weather remains warm anglers can get a jump on the spring season and get into some really good fishing from now through the end of April. 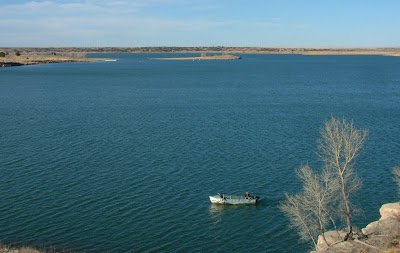 A lone fisherman navigates his way across Sumner Lake.

The lake is productive all summer and into the fall too, he said.

Denny says good spots to fish include down by the gauging tower on the face of the dam, off the rocks in the cove opposite the dam and in the flats on the east side of the lake.

And if the wind gets up and pushes folks off the lake as it’s been know to do, anglers can hide out on the Pecos River below the dam.

The stilling basin there is chock full of trout and is regularly stocked with catchables every other week or so, Denny said.

Powerbait and salmon eggs are the choice of bait here, he said.

Some of these trout even sport cash tags which can earn a lucky angler a cash reward from the nearby Hide Away restaurant, bar, grill, tackle, grocery store, RV park and motel.

Proprietor Mary Sena said supporters chip in every year to tag fish with colored chips that can be redeemed at her store located by the state park entrance.

Sena said they planted $250 worth of the fish this year and anglers have only redeemed $160 as of mid-February. 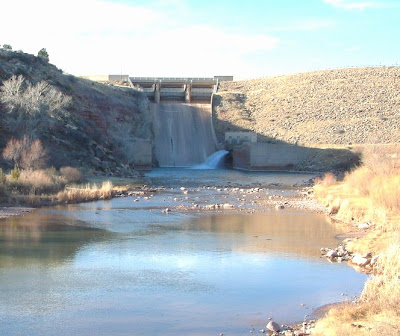 The Peco river emerges from below the dam at Sumner Lake.

Sena, a Vaughn native, said she and her husband have been in business at the lake for the past 35 years and absolutely love it.

“And we’ve had a beautiful winter so far this year,” she said.

Sena’s operation is open seven days a week from 8 a.m. to 8 p.m. and provides visitors to the lake with most needs including nightcrawlers and minnows.

Visitors will also find plenty of camping at the state park including RV spots with electricity and a dump station and primitive lakeside tent sites for those seeking a more natural experience.

Sena’s bar overlooking the 2,800-acre lake is within easy walking distance of the camping areas.

Park Ranger Derek Drew says the weather and the fishing has been spectacular and anglers have reported seeing a lot of shad in the water thus minnows have been working well. Red curley tailed jigs sporting a nightcrawler have also worked well in deeper water where 16- to 24-inch walleye have been found lurking at about 20 feet, he said. 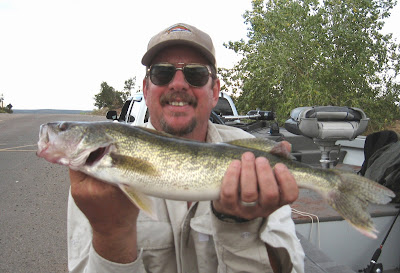 The author with a nice walleye.

The park features several boat ramps and docks for public use and the east side of the lake has been producing well for boaters, Drew said. However, those fishing from the bank have also experienced success especially down by the dam, he said.

There’s also hiking and biking trails and plenty of wildlife viewing to be had at the Sumner Lake State Park.

For more information about the lake check out the state parks site website at www.emnrd.state.us