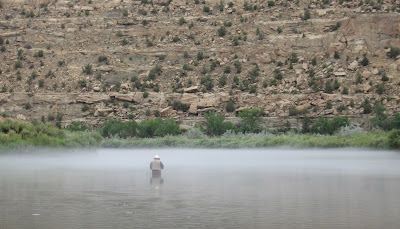 It was one of those days that old time anglers of the San Juan’s quality waters like to talk about.

A Baetis hatch that caused the river to roil with rising fish and anglers to howl with glee.

The day began dark and drizzly with low, threatening clouds and a quiet calm that held the promise of such a hatch.

And the river didn’t disappoint this early spring day.

“My God, look at all of them,” a voice exclaimed from downriver. “They’re everywhere.”

I turned from my spot below the island at Baetis Bend to see a couple of late arrivals trudging up the bank, talking and pointing excitedly.

I returned to my quarry, a big rainbow, steadily sipping Baetis bugs off the surface and ignoring every fly I cast her way.

She was wary of me as I had already caught and released several silver-sided, stockers in her immediate vicinity.

These future “hall-of-famers” greedily attacked my flies and fought like crazy but they were hatchery trout, leftovers from a recent, well intended but ill conceived stocking event designed to appease some guides during this controversial period of the river’s life.

As far as I was concerned, all they were doing was getting in the way of my catching a classic, river reared, San Juan rainbow, 18 inches of beautifully colored attitude and fight.

In the end she took a bigger Adams than I would have thought and my day was complete as she broke the surface, shook mightily, spit my fly and swam off unharmed.

As I headed back to the parking lot I couldn’t help but wonder if some of the river’s more vocal critics had been on the water this day, would they still harbor their negative view of this great fishery.

Because in an afternoon of fishing the back channel, the lower flats and the wadeable water at Baetis Bend, I caught on dry flies, plenty of good looking, hard fighting, Rainbow trout.

And while fishing deep with a big nymph and an emerger for a dropper, I managed to snare several of the lower river’s more predominant but stealthier brown trout, with most taking the nymph and steamrolling into the depths.

On this day, it felt like the river had vindicated itself, rejecting the notion that she was in poor health and doomed to die because of the lower flows over the last decade.

And it was apparent that many of the river guides, angler’s groups and others felt the same way at a state Game Commissioner’s Meeting in Farmington just a day before.

Over two hours of public comment about the river produced plenty of constructive suggestions on how to improve the fishery and little of the negative and misleading rhetoric that has dominated some flyfishing forums and the mainstream media of late (see related article ).

Mike Sloan, Chief of Fisheries for the state Department of Game and Fish opened the meeting by providing commissioners with an update on the department’s public outreach efforts in recent months.

The department is gathering feedback as it mulls numerous proposals to improve fishing conditions on the state’s world class, blue ribbon trout stream.

Angling on the river accounts for as much as $40 million a year to the state’s economy and a $250,000 legislative appropriation was earmarked by Governor Bill Richardson for habitat improvements on the river this year.

Sloan said almost everyone seemed to agree that the river has changed due to lower flows imposed just under a decade ago and silt and sediment has built up.

Many said they were seeing more crowding in productive fishing areas, tougher fishing due to warier fish and reduced insect hatches.

“But I also got feedback that the fishing remained excellent,” Sloan said. “And it’s still the best place people want to go to. 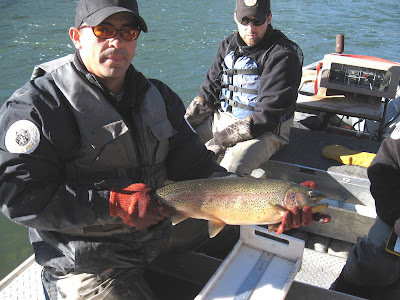 James Dominguez, Fisheries Biologist with the State Department of Game and Fish shows off one of the San Juan River’s prized trophy trout during an electro-shocking expedition in November, 2008.

To improve conditions, groups like New Mexico Trout, the San Juan Flyfishing Federation and the San Juan River Guides Association said they wanted to work with the department on more in-stream habitat improvements like those that have been installed below Simon Canyon and at Cottonwood Campground (see related article).

One possible project under consideration involves narrowing the river channel and adding gravel, cobble and boulders into areas immediately below the dam to provide fish and insects more habitat in which to thrive.

A silt and sediment diversion at the Rex Smith Wash inflow area adjacent to the Texas Hole parking lot is another project under consideration which could have an immediate and positive impact on the river.

Other proposals include imposing a catch and release only rule on the river’s entire 4.5 mile stretch of quality water where an angler can currently harvest a single trout over 20-inches each day but must cease fishing once they’ve taken that limit.

Proponents argue that the vast majority of San Juan anglers practice catch and release and eliminating any harvest on the quality waters would help reduce poaching and mortality among fish being measured for possible harvest.

Another proposal involves the creation of a San Juan stamp added to state fishing licenses for those who fish the quality waters, something along the line of $3 to $5 with all revenues raised earmarked specifically for San Juan river projects and to fund assignment of a full-time game officer to the river.

Other proposals include improved hiking trails along the river to encourage anglers to spread out, better picnic areas and boating facilities and more trash containers.

Meanwhile, the Concerned Citizens of the San Juan and San Juan Quality Waters Coalition continued their demand for an independent study of the river and higher stream flows.

It was apparent from commissioners remarks, especially after hearing from Bureau of Reclamation and Land Management officials, that commissioners clearly understood that they had no control over the water flows or the oil and gas industry operations on surrounding lands.

Those issues were better addressed by agencies with jurisdiction over them and as far as the commissioners seemed to be concerned, they would concentrate on problems they could actually solve.

Chairman McClintic even went so far as to suggest that those groups seeking an independent study of the river should consider paying for it themselves.

The department has already conducted studies and issued a white paper addressing concerns about the river (see related article )while also continuing to survey insect populations and analyze sediment data for a better idea of what’s going on down on the river.

And for these efforts, San Juan Fisheries Biologist, Marc Wethington and his boss, Sloan, were applauded by commissioners and audience members.

Simpson was publicly chastized for his involvement in stirring up negative publicity about the San Juan river to further his political agenda (see related story ) and his tactics and efforts were openly rejected.

And notably absent from the meeting was Associated Press Reporter, Susan Montoya Bryan, whose attendance had been promised and was widely expected.

Many in attendance expressed disappointment, as they were looking forward to her providing coverage of this other side of the San Juan’s story – the one she overlooked when writing about Simpson and the river recently.

For more details and comments from the April 16, 2009 Farmington meeting see the game commission minutes posted on the department’s website .

In the meantime, a working group of San Juan River stakeholders is slated to convene shortly to hash out a plan on what projects to pursue so the department can settle back down to doing some real work on improving the river.