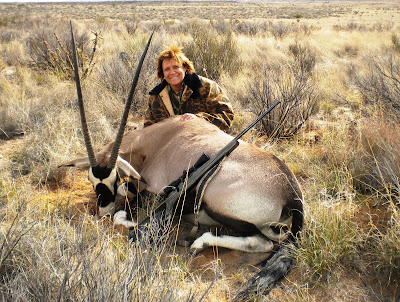 It wasn’t the kind of story you might expect to hear upon walking into a biker bar like Silva’s in downtown Bernalillo, New Mexico on a Saturday afternoon.

The lady behind the horseshoe shaped bar was running about, talking excitedly and offering up samples of the oryx she’d bagged just a day or two earlier.

On Ted Turner’s Armendaris Ranch in southern New Mexico of all places, she said.

Turner is the largest private land owner in the country and has several big ranches here in New Mexico including the Armendaris, the Ladder and Vermejo Park bordering the spectacular Valle Vidal in northern New Mexico.

And hunting or fishing on one of them would normally be way out of reach for most people, I thought.

But for Diane Gilmore, 54, of Albuquerque, a night of bartending at a National Wild Turkey Federation banquet last winter led her to the remote Turner ranch and a way of life she’d missed for many years.

See, Gilmore, a laid-off computer technician who moonlights as a bartender, used to hunt and fish all the time with her husband of ten years, Vern.

Many times they went fishing with Felix Silva Sr., proprietor of the fabled watering hole in downtown Bernalillo where Gilmore tends bar. 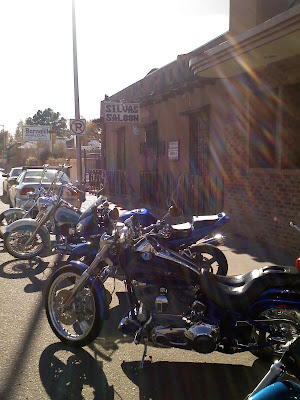 But she lost her passion for the hunting and fishing life after her husband was killed by a wrong-way driver on a highway in Texas during a cross-country motorcycle the pair were taking in 1995.

Gilmore labored on through the years without her partner and best friend until one day her girlfriend, Ann Salmon, invited her out to attend a National Wild Turkey Federation banquet.

Salmon’s boyfriend, Mike Jasper, is the organization’s regional field supervisor and he invited Gilmore back to tend bar at a state leadership conference banquet last January.

“Going to the banquets, I got the itch to hunt again,” Gilmore said.

And that’s where she came across the opportunity to hunt for an oryx, an African native that was brought to New Mexico in the 1970s to develop a herd on White Sands Missile Range for hunting purposes.

The big antelope have done well here due in part to the lack of any natural predators to keep their numbers down, thus hunting is one of the only ways to effectively manage them.

Hunters can apply through the state Department of Game and Fish for a reasonably priced, once in a lifetime license to bag one of the big animals on White Sands Missile Range or they can try their luck at drawing an unrestricted, off range license to hunt oryx on public lands surrounding the range.

And then there’s private land hunting permits issued by the Department to landowners for use on their own property.

Typically those permits are available through outfitters who offer guided hunts to the public for premium price.

Which brings us back to Gilmore who while serving drinks at the National Wild Turkey Federation banquet noticed a bucket full of a dozen custom knives up for auction.

Attached to each knife was a raffle ticket for a guided oryx hunt on the Armenderis Ranch, normally a $3,000 proposition.

“I got all excited thinking about the chance to go after one of those majestic animals,” she recalls.

So Gilmore picked out three knives, plunked down $330 and waited for the drawing.

“I screamed like a maniac,” the New Jersey native says of the moment they called her number. ”It was surreal, my heart nearly jumped out of my chest.”

Gilmore had won and arranged to go on her hunt the following fall.

As the date of the hunt got closer, Gilmore grew more nervous.

Gilmore borrowed Jasper’s .300 WSM rifle and went out to the city’s range for a little practice and found her aim was still true.

And then the day of the hunt finally arrived.

Gilmore had stayed at a friend’s house at Elephant Butte the night before and awoke early to make the drive over to Engle and where the gate to the big ranch stood.

Accompanied by Jasper and Salmon, Gilmore met up with her guide, Amado Hernandez, who gave her an orientation, took her to ranch firing range to check her shooting skills and then they went for a drive.

The group searched the sprawling ranch for several hours before they finally spied a herd far off in the distance.

Upon driving around the base of a small hill to get a closer look they suddenly came across a lone oryx observing them from about 215 yards away. 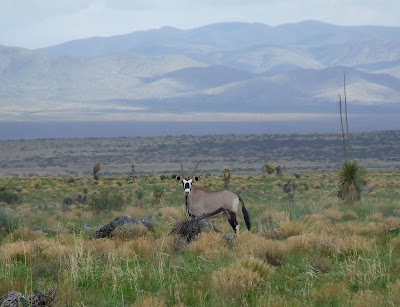 Gilmore got down to see if she could get a shot at her but watched in dismay as she began to walk away.

Guide Hernandez gave a shrill whistle and the animal stopped to look back.

Gilmore took her shot and dropped the big antelope on the spot.

“My friends were yelling `she’s down’ and I was all excited,” Gilmore says with emotion. “This was my first hunt in twelve years and I was smiling so much my cheeks hurt.”

Gilmore says the best part of the hunt had to be after the kill because in all her years of hunting with Vern she knew the real work came in harvesting the animal.

“Amado did all the work,” she says. “That was special,”

Hernandez says he guides about 50 or 60 oryx hunts on the 360,000 acre ranch east of Truth or Consequences every year and remembers Gilmore because she was so ecstatic about her hunt.

“She was pretty thrilled,” he says. “And she did a good job too.”

Gilmore says she’s got a freezer full of good, lean organic meat processed by Gordon Mishler of Mishler Meat Cutting in Williamsburg and has a beautiful trophy mount for her wall on its way from Ken Watkins of High Sierra Taxidermy in Truth or Consequences.

But for Gilmore the best part of the hunt was that it rekindled in her that long dormant passion for the sport. 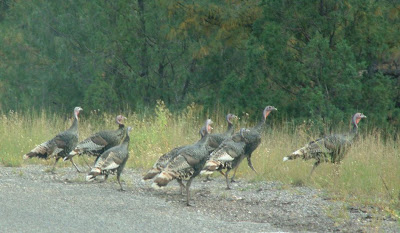 Jasper says that’s exactly what the National Wild Turkey Federation is striving to do, conserve wildlife and preserve the heritage of hunting.

And making exciting trips like this available is one way to do it, Jasper says.

“To let an average, everyday, person have a shot at a trophy hunt like this is priceless,” Jasper says.

Jasper says banquet auctions like the one Gilmore participated in have allowed numerous men and women around the state to go on such hunts while also raising much needed funds for the organizations’ mission.

And it couldn’t be done without the generous contributions and donations of people like Ted Turner whose ranches not only provide the habitat for many game species but the opportunity to hunt for them too, Jasper says.