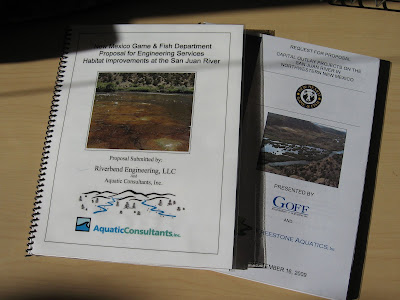 State Game and Fish officials have decided to seek additional bids for engineering services before proceeding any further with long-awaited habitat improvement plans to the trophy-class trout fishery at Navajo Dam on the San Juan River.

The department solicited and received proposals this summer from two firms to develop engineering plans for a runoff diversion at Rex Smith Wash and in-stream habitat improvements in the “Braids,” both areas located just above “Texas Hole.”

The two projects were called for by a working group of San Juan River stakeholders earlier this summer after the state legislature, last winter, appropriated $250,000 for the habitat improvements on the San Juan at the request of Governor Bill Richardson.

The funding came as controversy raged over fishing conditions on the river due to low flows implemented by federal operators of the dam over the last decade to accommodate endangered fish downstream.

The department solicited bids from about a half-dozen engineering firms to do the engineering work and received proposals from two firms interested in performing the job, said Marc Wethington, the San Juan’s Fisheries Biologist for the state Department of Game and Fish.

After review of the two proposals, department officials decided to seek more proposals through a formal request for proposals process

“The Department determined that a broader solicitation was warranted in order to ensure the best possible outcome is achieved,” says Marty Frentzel, Chief of Public Information and Outreach for the state Department of Game and Fish.

Frentzel declined to elaborate on the decision.

One of the firms that applied was Freestone Aquatics of Littleton, Co. in conjunction with Goff Engineering of Durango, Colo.

Freestone Aquatics is owned and operated by a couple of fishing guides who formed their own company in 2006 to do fish habitat work, according to information contained within their proposal and posted on their website.

Freestone Aquatics referenced its preliminary work with the San Juan River Foundation in describing their work experience, stating in their proposal that “Freestone Aquatics is involved in a large scale restoration project on one of the premier gold-medal tail water fisheries in the West.Working with the San Juan River Foundation and the state of New Mexico, Freestone has been asked to provide expertise in managing this high profile, high use fishery.”

The statement goes on to say that “Freestone Aquatics employees are currently in the data gathering and design phase that will eventually be applied to this highly valuable fishery. Installation of Freestone-designed structures will function to transport sediment resulting in the recovery of thousands of square feet of macro invertebrate habitat.”

Freestone Aquatics is not currently working for the state of New Mexico in any capacity with regards to the San Juan as may be inferred from this statement in their proposal, said Lance Cherry, Assistant Chief of Public Information and Outreach for the state Department of Game and Fish.

The low bid for the project came from Riverbend Engineering, a river restoration firm with offices in Albuquerque and Durango, Colo., who submitted a proposal in partnership with Aquatic Consultants of Albuquerque.

They offered to perform the engineering services for just under $50,000.

The firm was not involved, though, in the oft-criticized habitat improvements done below Simon Canyon a few years ago, he said.

Those were designed by the Army Corp of Engineers, Wethington said. 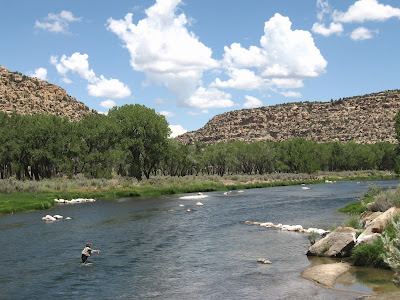 An angler fishes during the summer of 2008 among the much maligned but highly effective habitat improvements installed below Simon Canyon.

Riverbend’s partner in their proposal is Aquatic Consultants which has been involved in numerous projects throughout the state including trophy sport fishing and commercial fisheries management projects at Cow Creek Ranch on the Pecos River, Don Imus’ ranch near Las Vegas, N.M., and Isleta, Sandia and Eagles Nest lakes.

Paul Cassidy, founder and president of Aquatic Consultants, was the state Department of Game and Fish’s Northwest Area Fisheries Manager for 11 years before leaving the department to form his own firm.

A new request for proposals for the Rex Smith and Braid’s habitat improvement projects is forthcoming and these firms may apply again, Wethington said.

In the meantime, the department awaits the outcome of the upcoming special session of the state legislature called for by the Governor to consider the state’s $650 million budget shortfall.

Frentzel said the department is not anticipating loss of the previously appropriated funds for the San Juan projects but noted that the any funding decision rests with the state legislature and governor.

One suggested method of covering some of the state budget shortfall includes recouping previously appropriated capital outlay funds that have yet to be spent.

“We’re not looking at those (from last year) right now,” she said. “But I would suggest that they (NMDGF) get a plan and start spending because as soon as this next session starts, we’ll be looking again.”

Even under a worst-case scenario, the San Juan projects appear to remain a priority.

“The Department views these projects as important,” says Frentzel. “And (we) will have to evaluate our budget situation and ability to move forward on them should the current funding be lost.”

And in the future, the department may have an additional revenue stream to rely upon rather than the generosity of the legislature to complete projects on the San Juan River.

Frentzel said the department is in the process of drafting proposed legislation, as directed by the state game commission, to authorize an additional habitat stamp for those who fish the quality waters of the San Juan River.

That idea came out of public discussions last spring regarding ways to improve fishing conditions on the San Juan River (see related article).