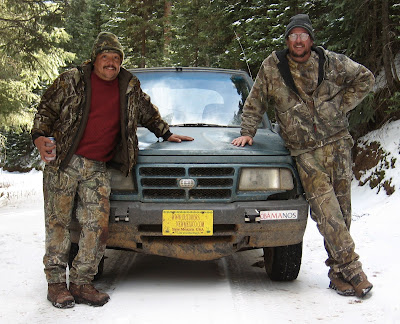 As the fall approached I began having the dream again, sometimes in vivid color, sight and sound and other times just blurry images and a fast fading, foggy memory of it upon awakening.

Then this morning I snapped awake feeling frantic and agitated.

I lay in the dark listening through the bedroom door as my aging and now slightly demented dog, Wiley, padded back and forth across the living room floor.

Then there was the slap, slap of the doggy door as she went outside to continue her rounds.

I struggled with my fleeting memory as the dream evaporated with the slowly brightening room.

From outside I heard our newspaper land in the driveway and the delivery truck speed away.

One thing I knew, it was essentially the same every time, reliving the actual events, but with an unnerving twist.

We were out on our hunt, having drawn tags for cow elk, up in the high country above Eagles Nest.

I was there with my buddies, Mikey Giddings and his uncle and Glenn Jaramillo and his son.

It was our second year in a row hunting in this location.

The year before we had been very successful and stocked our freezers full of good, lean organic meat (see related story here).

But this second year was different and I haven’t told the story until now.

We had been scouting at dusk along a forest road crossing the valley floor when we came across a herd headed back up the mountain.

They crossed the road right in front of our trucks.

“You know where I’ll be tomorrow morning,” Glenn said.

The elk were following an old logging road and we talked excitedly about our plan to catch them coming down or going back up again in the morning when the hunt officially began.

We were there at first light, Mikey on the far left up on a little knoll watching the draw that spread out before us into a large meadow.

I was hiding in the tree line a couple hundred yards away, covering the middle of the meadow, right where the logging road began its climb up the mountain.

And Glenn and Jonathan went ahead, around another tree covered knoll, to the cover the other side of the meadow.

As we waited, a few trucks motored by loaded with hunters heading off into the forest and the grey light of dawn gave way to the sun.

The elk should be moving off the watering holes and meadows down below us and heading back uphill soon, I thought as I waited.

Then a rifle shot cracked through the air and Glenn was on the radio.

They had slipped in right before us, coming up the draw and skirting the meadow by walking through an opposing tree line.

Glenn was in the right spot to see them working their way across us and picked off a young, antlerless, male.

We went back to camp and got to work skinning it and were eating grilled tenderloin with fried onions by lunch. 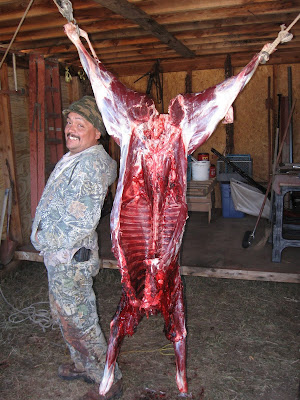 The next day brought a good dusting of snow which help revealed plenty of tracks and sign all over the valley floor, up the logging roads and on top of the mountain.

But we weren’t having any luck at all in actually seeing them.

So the next day we climbed the mountain in my little four wheel drive Geo Tracker with Glenn riding shotgun, bouncing up and over the rock strewn logging roads, and we went looking for them.

For miles we drove along snow covered forest roads, enjoying the beauty of the frosted mountain, the late afternoon sunshine and discovering new places.

Then we came across a wide meadow on the uphill side of the road. A little, two track, jeep trail ran up through it.

We dropped the transmission into low gear and began idling up the muddy trail.

On our right a deeply forested hill rose, shaded from the sun and still covered in snow.

To our left, scrub oak, evergreen shrubs and stands of aspen bathed in the sunshine.

As we motored on up the meadow, she came out of the south facing treeline and began across the trail.

Glenn swore as I slowly came to a halt, turned off the engine and applied the parking brake.

She was now standing in the middle of the trail, just at the crest of the hill, broadside and looking straight at us.

Glenn swore again as I slowly pushed open the driver’s side door and eased my Dad’s model 1898, Springfield Armory, 30.-40. Krag from between the front seats.

I dropped to a knee, rested the rifle in the crook of the door frame and thumbed off the safety.

I couldn’t believe she was still there when I sighted down the barrel.

Glenn hissed, “shoot her, damn it.”

I took a breath, held it and then began steadily pulling the trigger.

Then she suddenly leaped off the road and bounded towards the safety of the snow covered pines.

I still had her in my sights when I heard a shout in my head.

That’s when I usually snap awake. 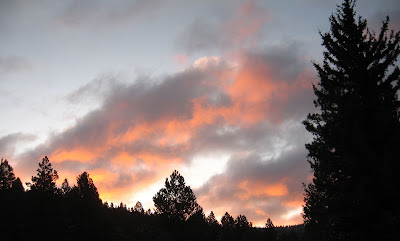 This morning I lay there thinking, again, why I never took that shot.

I could take some solace in the fact that I hadn’t taken a risky shot, that we didn’t have to follow a wounded animal off into the woods, near dark, in the hopes we could recover her body.

I did the right thing I argued to myself and others after the hunt.

But someone couldn’t help but snicker that maybe I would have if I had only been carrying my camera.

So as we prepare for this year’s hunt, in the same place for the same animals, I wonder about that shout in my head.

Did that happen or was it really just a dream?

After the elk had escaped that day we had gone up into the tree line and found their beds amid the grass, some still warm, their pellets soft and moist, we’d just missed them.

Maybe she’d slept late that afternoon and was the last to leave.

Maybe she’d been dreaming too.

One Response to The Dream Hunt