Thirty Years of Thrills and Spills with New Wave Rafting 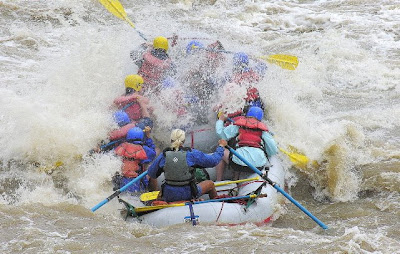 They started out with a used rubber raft, a beat up station wagon and a hunger for some cash and kicks.

And they aren’t quitting anytime soon.

“We’re having too much fun,” Steve says during an April 2009 interview at the couple’s modest home located on the big river between Espanola and Taos.

Miller, whose rugged good looks, full head of hair and energetic demeanor belie his 69 years, lives a life many who visit the Southwest might find enviable.

During the spring and summer the Millers and their crew of experienced guides provide customers waves of excitement and adventure on the best rafting rivers New Mexico has to offer, the mighty Rio Grande and the idyllic Rio Chama.

And when the season ends the Millers typically unwind with a relaxing, three-week float down the Colorado River through the Grand Canyon or spending some time fishing down at Padre Island.

But then it’s back to work, this time teaching skiing up on the slopes of Taos for the winter.

“It’s a lifestyle we’ve worked hard to make a living at,” says Kathy, 58, while flashing a brilliant smile amid a sea of freckles and bronzed skin. 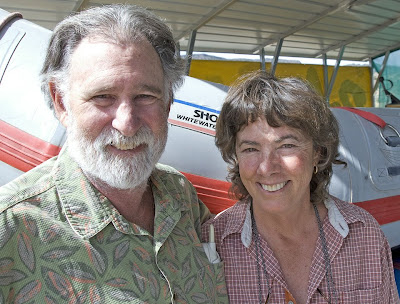 The two who expect to celebrate their 30th wedding anniversary this July, met at a party in Tesuque back in the late 1970s, when real hippies could still be found wandering the scene in Northern New Mexico.

Steve Miller was an intense, rugged, outdoor type with long hair and beard and wearing authentic Navy bell bottoms jeans, the ones with the buttoned flap on the front, Kathy says.

“He was a very exciting, outdoors type,” she says.

Miller had come west from New York City to ski and then learned a host of other outdoor skills which led him to a career with Outward Bound and a stint with state government creating a similar program for criminal offenders.

The program took groups into wilderness settings where they learned to challenge themselves and work together to overcome difficult situations involving mountaineering, rock climbing, river rafting, canyoneering, camping and wilderness travel.

Prior to that Miller had attended the University of California at Berkeley and received a Master’s Degree in anthropology from Harvard University. He also taught anthropology at New Mexico Tech in Socorro for several years and chaired the Department of Physical Recreation where he ran outdoor adventure programs.

Kathy Hamerlee had gravitated to New Mexico from her hometown of Simi Valley, California, where she had at one time considered a career as a marine biologist but got caught up in the “tune in, turn on and drop out” nature of the times.

“She was your classic, cute, little hippie chick with two kids then,” Steve says of their first meeting.

They hit it off, got married and have been having a ball ever since.

“I was not an outdoor person,” Kathy says. “But he (Steve) taught me to kayak, backpack and fish. He really opened up the outdoor world to me.”

Miller says he was heavily influenced by the environmental movement at the time including the works of author Edward Abbey whose books “Desert Solitaire” and “The Monkey Wrench Gang” inspired many Southwestern environmentalists.

“I was rock climbing in Moab during the sixties,” he says.

During the 1970s and 1980s Miller says he and Kathy became members of the radical environmental group “Earth First” and ran rivers with its founder Dave Foreman.

“Abbey was one of our early heroes,” Steve says. “Everyone nurtured fantasies of blowing up Glenn Canyon Dam. It (the dam) was the single clearest affront to those who loved the Southwest. There are people still trying o do something about that.”

The couple and Earth First’s founder, Foreman, parted ways with the group after other members became increasingly involved in eco-terrorism, Steve says.

The two got their start in the river rafting business after the Southwest Outward Bound School they worked for in Santa Fe went under in the late 1970s.

They purchased one of the school’s surplus rubber rafts, a 13 ½-foot long Campways Miwok , slapped it on the roof of their beat up Mazda station wagon and opened their own business.

“Our motto was the river’s are free and we’re as cheap as can be,” Steve says. 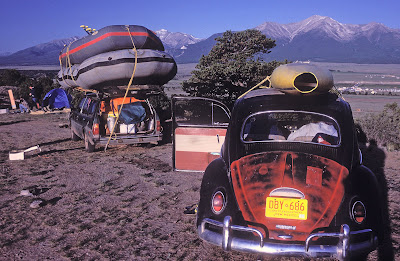 The early days during an outing on the Arkansas River in Southern Colorado, notice the sheared off bow of the kayak.

But business was so bad their first year due to low water from a drought that they finally just packed up and headed over to Idaho to float the Salmon River with some fellow Earth First members.

But the following year they got serious, employing the use of a booking agent, Jim Manning, who maintained a kiosk in the lobby of the La Fonda Hotel in downtown Santa Fe.

“Because of him our business grew considerably,” Steve says.

By 1995 they had a fleet of about 30 boats, employed about 20 guides, carried 9,500 passengers and generated a half million dollars in revenue.

“We hit it big time,” Steve says. “But I was under so much pressure I had to see a shrink.”

Steve says those were the days of big water on the Rio Grande, when springtime runoff routinely ran at 3,000 to 5,000 cubic-feet-per-second (cfs) and the movie thriller “River Wild” was a big hit at the box office, and a big boost to business. 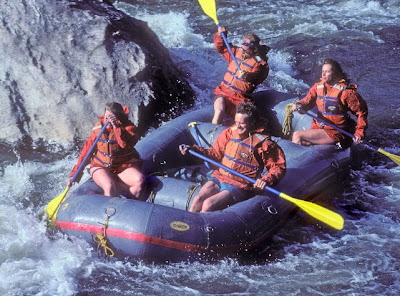 But the good times took a tragic turn for the worse in June 1997 when Kathy’s son, Brahm Reynolds, 23, lost his life while kayaking on the south fork of the Payette River in Idaho.

Reynolds was following in his mother’s footsteps and working on the river and at the slopes at the time.

“He was born to row, it was literally in his blood,” Kathy says.

Having been brought up on the river, Brahm had all the skills needed to make it on his own.

“He embraced the lifestyle we were enjoying but wanted to experience the big rivers,” Kathy says. “He was looking for adventure like any young man his age.”

Kathy says the only consolation she can find in her son’s death is that he died doing what he loved.

“I like to remember him for his love of nature, his self assured, quiet confidence, his ability to make people feel comfortable and safe,” Kathy says. “I miss him terribly.” 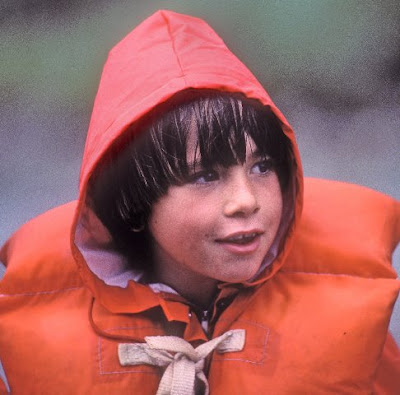 Brahm at 7-years-old and already an experienced river runner.

Kathy now finds some peace in having finally having achieved her goal of living on the river.

“It’s something I’ve been scheming on for years,” she says.

With a little luck, a lot of savings and the help of a small family inheritance, the couple was finally able to make their move.

And at the start of the 2008 season, as gas prices soared to four bucks a gallon, the Millers were bailing out of Santa Fe and moving their rafting business north to Embudo and a new home down on the Rio Grande.

No more running school bus loads of customers fifty miles from the “City Different” to the boat launch at Pilar, Steve noted with a sigh.

“We didn’t lose any business and significantly improved our profitability,” Steve says. 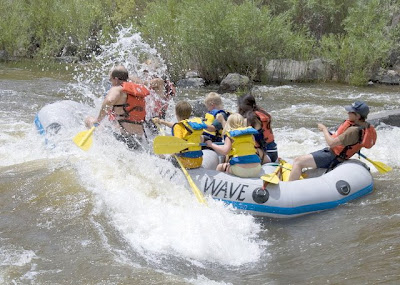 The Millers attribute much of their success to their dedicated, longtime employees like Dave “New Wave Dave” Wassil, Mike Boren, Britt Huggins and Neil Oberheide, just to name a few.

They also credit their many repeat customers with helping keep the business afloat during the change in location.

Asked about some of his more notable clients over the years, Steve remembers most former Governor John Connally of Texas who was sitting next to then President John F. Kennedy when he was shot and killed by a sniper as the politicians rode in a motorcade through Dallas back in 1963.

Steve says Connally showed him his scar from the wound he received from one of the sniper’s bullets that passed through Kennedy.

Steve says actor John Travolta and his family also rode with New Wave as did fellow actor Beau Bridges while Steve’s son, Ethan, had the pleasure one time of guiding members of the band, “Z.Z. Top” down the river.

Ethan, 41, Steve’s son from a previous marriage, now lives in San Francisco where he works in computer programming and design and has three children.

Kathy’s daughter from a previous marriage, Laina, 36, also lives in San Francisco and has two children and with a Ph.D. in Peace Studies works for the organization, Partners for Democratic Change, which is engaged in peace and confliction resolution in emerging democratic countries.

Steve is also president of the New Mexico River Outfitters Association which represents the majority of Bureau of Land Management-permitted outfitters on the Rio Grande and the Chama River.

The association presents a unified voice on behalf of the industry and seeks to maintain the highest standards of safety and service, he says. 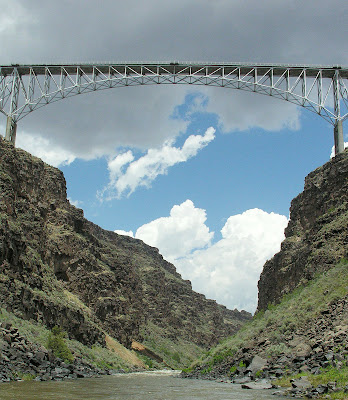 Steve is also an accomplished photographer whose work is featured in his book “The Grand: The Colorado River in the Grand Canyon, a Photo Journey,” published by Wilderness Press and the Grand Canyon Association.

Photographs in the book were taken over the course of 13 trips through the Grand Canyon, dating back to 1971 and represents some incredible work. Check out the Miller’s website at www.newwaverafting.com for more info.

And to what does Steve Miller attribute his longevity and good health?

He fishes regularly and comes from good stock. His mother is still alive and kicking at the tender age of 102 and his father lived to the ripe old age of 94.