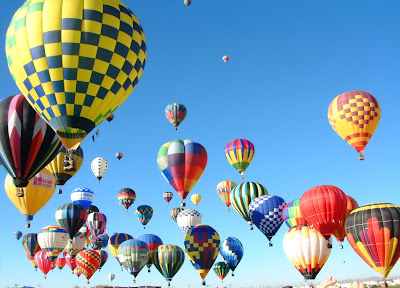 By Karl Moffatt
Lightning flashed in the pitch black sky as we raced south on the interstate to the balloon fiesta in Albuquerque.

It was five in the morning and we couldn’t see what the weather was doing, all we knew was it smelled like rain and there was one hell of a light show on the western horizon.

We arrived at the Park-And-Ride area at the Santa Ana Star Casino with plenty of time to spare, it was only forty miles from the Southside of Santa Fe and a quick drive on the nearly empty highway.

We piled into a school bus loaded with plenty of others who’d gotten up early to participate in New Mexico’s annual fall attraction, the world’s premier, hot air ballooning event.

In the predawn darkness we huddled in the bus as winds whipped rain against the windows and listened as a local broadcaster spoke over the bus radio about the weather front passing through the area. 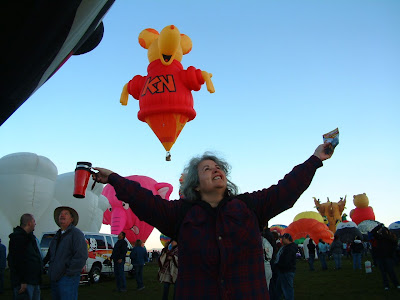 “Don’t worry, think positive and it’ll be fine” my wife said as I shook my head.

We rolled into town along an empty back road and slipped like a presidential motorcade through traffic backed up at the balloon park.

Within minutes we were inside and on the field.

No hassles with parking or traffic and the cost of admission was included in our $10 bus ticket.

This was the only way to go.

And the weather front had passed through quickly after whipping up things on the north side of town. 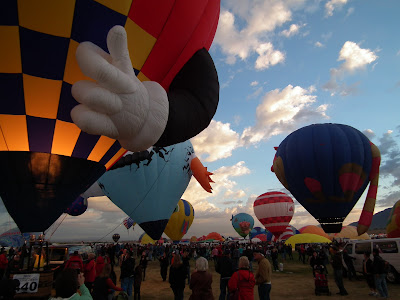 The wind and rain was now gone and as the sun rose over the Sandia Mountains, the balloons began to rise.

First one and then another filled with hot air, fueled by roaring propane burners, the big colorful envelopes, rounding out and stretching for the sky.

Crowds of onlookers moved among the balloon crews, almost every one armed with a camera of some kind.

It is the most photographed event in the world, according to its promoters. 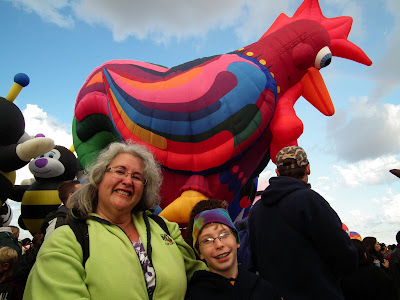 It is truly a one of kind, interactive experience as spectators become part of the scenery, mingling on the field as crews raise their balloons and depart.

Some 500 balloons from all over the world will typically take off in a mass ascension while as many as 100,000 onlookers gaze skyward from the grounds of the city’s 78-acre launch field.

But today many balloons remained grounded due to high winds in the upper atmosphere.Others though braved the conditions and float up and around at lower elevations. 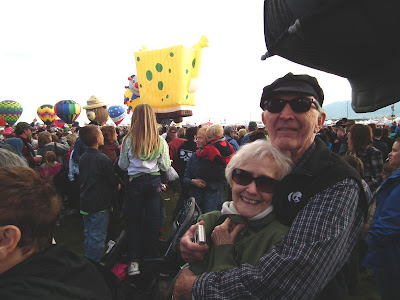 Despite the flight limitations, crews filled their balloons to provide the crowd with the spectacle of sight, sound and color that they had come for.

The weather had played its hand again, forcing cancellations of some events as it has throughout the week.

Windy conditions and spotty rain in the evenings put a damper on some of the scheduled evening festivities including the hugely popular balloon glows and fireworks shows. 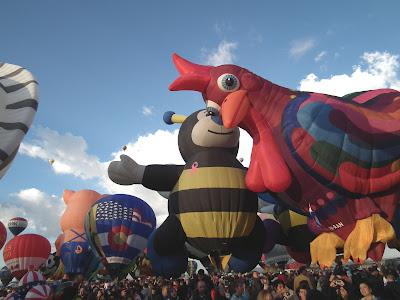 But the weather is all part of the experience and when it holds and the conditions are right, there’s nothing like standing on a field of grass with thousands of other people watching hundreds of aerial monuments take shape and slowly rise from the earth to our delight and amazement.

And when it’s all done by mid morning, it’s time to walk the midway in search of those special mementos and treats that can only be found amid a carnival atmosphere like this.

Breakfast burritos abound while turkey legs and pizza can also be had, too. There are beer gardens and musicians,knife jugglers and donut hawkers. 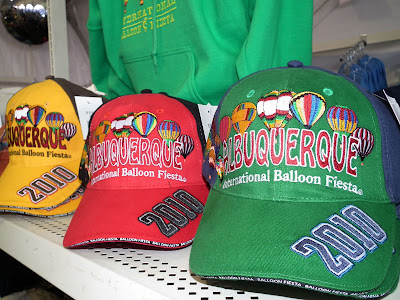 There are shops that sell football paraphernalia, hats and clothing from South America, souvenir pins, playing cards and apparel commemorating the balloon fiesta and many other items too.

But it’s the crowds of people milling about that provides a whole other show of colors, sights and sounds.

Foreign voices abound with local Indians speaking in their native tongue while tourists from overseas and down south wander about chatting excitedly in their own language. 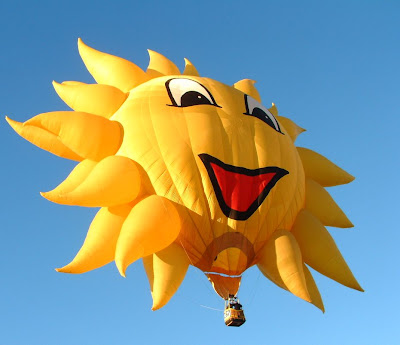 And everyone seems to be grinning.

There among the crowd comes a man wearing an Assumption College sweatshirt and I have to stop him and say hello.

“Hey I’m from Boston,” I told him. “We used to all pile in a car and cruise out to Worcester to chase the girls out there at Assumption. We’d party all night and then go eat big plates of baked Ziti down at the Boulevard Diner, you know the place?”

“No,” he told me with a squint, “It’s my daughter who goes to school there.”

We find our bus and leave the balloon field behind, rolling through the north valley past the bronze colored pastures, the copper tinged cottonwoods of the Bosque and under our famed blue skies.

We yawn and wonder aloud what we’ll do with the rest of the day, one that for many people has just gotten started. 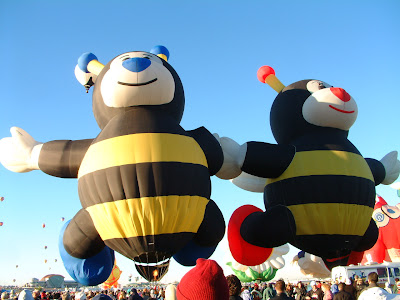 Posted under Uncategorized
Comments Off on Albuquerque International Balloon Fiesta – What a Gas!