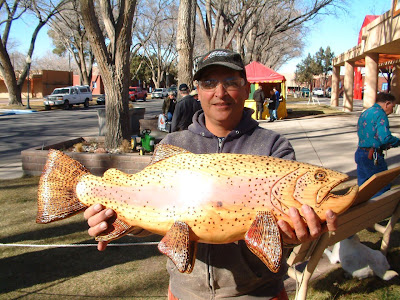 Just when it seems the winter blues may never end the annual hunting and fishing show arrives to boost our outdoor spirits and tide us over till spring.
“I love it,” says chainsaw artist, Mark Chavez, 52 of Albuquerque, who will be performing his craft for the crowds at the state fairgrounds in Albuquerque this Valentine’s Day weekend.  “I’ve met a lot of cool outdoorsmen here and it’s great fun for the family.”
This years’ show kicks off at noon on Friday and runs through Sunday at 5 p.m. and will feature many new exhibits and provide plenty of kicks for the kids, says promoter Bob Gerding of Bob Gerding’s Outdoor Adventures.
“We’re really emphasizing kids’ activities to make it a real family affair,” says Gerding who is in his 12th year of bringing the outdoors inside.
Kids can learn how to handle a weapon safely and shoot straight at the show’s adult supervised BB gun range inside  Gerding’s Hunting and Fishing Show at the Manuel Lujan Complex on the fairgrounds.
Kids can also pick up the knack of handling a fishing rod at the bait casting pool where children with an eye for the prize can win fishing outfits and other prizes, Gerding says.
Kids under age 12 get into the show for free while adults pay $8 each and parking at the fairgrounds is $4.
Chavez the wood sculptor says he plans on displaying an elaborate wooden bench featuring elk, bear, owl and trout carved into it.
“I’m still working on burning elk hoof prints into the seat,” he said.”It’ll make a nice addition for someone’s lodge or game room.”
In addition to performance artists like Chavez visitors to the show will find an array of interesting exhibits and plenty of seminars.
Aspiring anglers will find a casting pool and expert anglers to teach them the craft of casting with a fly rod or a spin casting rig and those wishing to the learn the art of outdoor cooking will find expert’s armed with cast iron skillets and plenty of recipes.
There’ll be a turkey calling contest, raffles for all sorts of goodies and services and door prizes too, said Gerding.
Show co-sponsor 94 Rock where Gerding can be heard on most Thursday mornings talking fishing with dee jay T.J.Trout, will be giving away guided fishing trips including a Tiger Muskie expedition to Bluewater Lake and a day on the private waters of Brush Ranch on the Pecos River.
Visitors will also find amazing displays of stuffed animals at taxidermy booths and enticing photographs or videos from lodges in thrilling locations like Alaska, Montana, Oklahoma and even Africa. 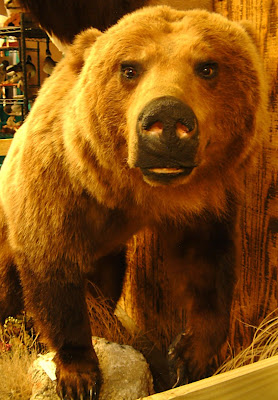 There’ll be jewelers and knife makers on site selling goods with an outdoor theme for those seeking a special Valentine’s Day gift for their loved ones.
And the hall will be crammed full of the latest models of recreational vehicles including campers, trailers, off road motorcycles and all terrain vehicles, Gerding says.
There’ll be informational booths sets up by outdoor advocacy groups like New Mexico Trout, the Rocky Mountain Elk Foundation and Becoming an Outdoor Woman in New Mexico.
The outdoor woman’s organization sponsors a three day series of workshops at the National Rifle Association’s Whittington Center in Raton where women of all ages can learn outdoor skills like map and compass reading, shooting, cooking, fishing and wildlife photography and calling.
There’s even an introduction to camping class for single moms so they can expose their kids to the outdoor life and all it has to offer, says Leilani McGranahan, Coordinator for the organization.
“It’s a sure fire cure for cabin fever,” Gerding says of his show.
Show times are noon to 6 p.m. on Friday, Feb 12th, 9 a.m. to 6 p.m. on Saturday, Feb. 13th and 9 a.m. to 5 p.m. on Sunday, Feb 14th.  Entrance is $8 for adults, free for kids age 12 and under and parking at the fairgrounds is $4.
“If You Go”
Those traveling to the show from Santa Fe can make a day of it on Saturday by taking the train out of Santa Fe to downtown Albuquerque and boarding a bus headed by the fairgrounds.
The weekend rate for the train is $5 for a day pass with trains leaving downtown Santa Fe at 8:10 a.m. and 11:25 a.m. on Saturday, according to the schedule and fares posted at www. nmrailrunner.com. The return train leaves the downtown Albuquerque station at 4:41 p.m. with the last train out at 7:54 p.m.
Any number of Albuquerque city buses run by the sprawling state fairgrounds from the train depot downtown including the Route 66 bus which heads up Central Ave. with a stop at San Pedro where one can walk a short distance to the entrance most convenient to the show.
A day pass on the bus costs $2 and the Rt. 66 bus runs every 15 minutes, all day until around 9 p.m., well after the last train has left town.  For further information about bus routes and schedules all the city’s help line at (505) 768-2000 or visit the Abq Ride website at www.cabq.gov/transit.
Those who wish to drive from Santa Fe can head south on 1-25 and take Central Ave. east to San Pedro and then head north to the entrance. The Fairgrounds in located between Lomas and Central and San Pedro and Louisiana and there are any number of alternative routes one can take through the city.
For a more scenic trip try driving down to Albuquerque on State Road 14 through Madrid and Cedar Crest and then cross under I-40 and head west on the frontage road which eventually turns into old Route 66, now known as Central Ave. Follow into the city and take San Pedro to the entrance for the show where parking is $4.
Posted under Uncategorized
Comments Off on Annual Hunting and Fishing Show Brings Outdoors Enthusiasts Together