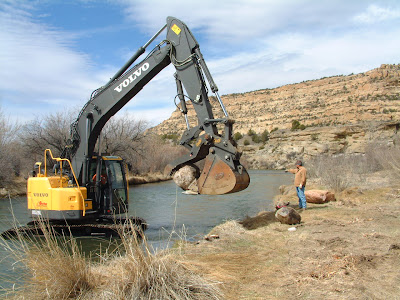 With a big splash the San Juan River recently received yet another load of boulders designed to improve fishing conditions on the blue ribbon trout stream in northwestern New Mexico.

The latest area to receive habitat improvements on the San Juan is the BLM’s Trucha Rosilla day use area located in the bait waters just below the village of Navajo Dam at the end of San Juan County Road 4275.

The project area involves a few hundred yards of riverfront, actually a back channel that peels off from the river to a diversion canal, where crews have cleared out about 15 acres of salt cedar and Russian olive and dropped dozens of boulders into the streambed for improved fish habitat.

The rock work transformed what was a generally flat, featureless stretch of water into one with several new fishing holes, and since the area already boasts a good population of resident brown trout it should provide anglers with yet another worthy spot to fish on the river, Hansen said.

Hansen and fellow Fisheries biologist Marc Wethington, of the state Department of Game and Fish (NMDGF), were on hand March 31 during the boulder installation to answer questions from media members like Amanda Goodman, Farmington based television reporter for Channel 13 of Albuquerque and James Monteleone of the Farmington Daily Times. 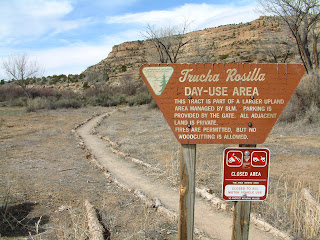 The habitat project is the latest of several undertaken on the river over the past few years to alleviate the impact of low water flows imposed by the federal operators of Navajo Dam in recent years. The flows have been brought down to maintain downstream habitat for threatened or endangered fish species and the river is now being managed to account for the lower flows.

Evidence of these improvement projects can be seen below Simon Canyon and around Cottonwood Campground, where rocks structures have been installed to provide cover for fish and to help keep silt and sediment suspended and moving downstream.

Hansen says the habitat projects have generally been well accepted by the angling public as they have opened up previously underutilized areas of the river to angling.

The rocks structures have helped redirect the river to create deeper channels which trout like, while water churning around and through the rocks scours the streambed and digs out holes for fish to hide in.

The stretch below Simon Canyon has seen a resurgence in angler use due to the improvements with good, winter dry fly action because of increased insect populations thriving in the cleaner streambed, according to anglers and guides.

Trout Unlimited Wades In:
But the projects did not come without controversy, as evidenced by recent remarks by Greg McReynolds, a representative of the national organization, Trout Unlimited, who has criticized the habitat improvement projects that have been undertaken on the river in recent years. 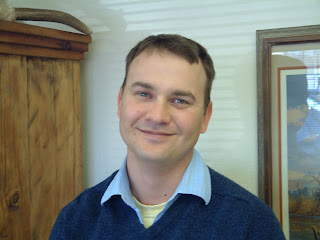 McReynolds, in opposing HB 51 which sought to create a special San Juan habitat stamp to fund such projects remarked during a hearing before the House Consumer and Public Affairs committee during the most recent New Mexico state legislative session that the habitat improvement projects were expensive and ineffective.

He claimed that $250,000 has been spent on them so far and that they were “unfortunately, not working.”

The bill, which sought to raise funds from anglers for further habitat improvement projects on the river (see related story) , never made it out of its next scheduled committee due in part to objections raised by opponents such as McReynolds, according to its sponsor, State Representative and House Minority Leader Tom Taylor, R-Farmington.

But McReynolds didn’t stop there; he then went so far as to claim for a Farmington Daily Times article about the demise of the bill that the habitat improvement projects were actually making conditions on the river worse.

Many San Juan River guides and anglers expressed astonishment that someone who should know better would make such an outrageous claim.

“I don’t understand how a guy, especially from Trout Unlimited, can make a statement like that,” says Rick Hooley, 46, of Bayfield, Colo., a San Juan River guide for Rocky Mountain Anglers. “I was amazed to see that. I don’t see how he could have been more wrong.”

Hooley, like many other guides, reports that the habitat improvement areas on the river are working as planned, providing better fishing and reduced silt and sediment.

“The dry fly action down there this winter has been great,” he said.

David Israel, 62, of Bloomfield, is a retired business executive who moved to the area in 2005 just to fish the fabled river and now works as a clerk at Abe’s Fly Shop and Motel in Navajo Dam.

“I fish that area (Simon Canyon) probably more than anybody,” Israel said. “And this winter has been the best I’ve ever seen it. He (McReynolds) must not fish here very often to say something like that.”

Israel remarked that some people can’t seem to accept that the San Juan River below Navajo Dam is a manmade, tailwater fishery and not a pristine, free flowing, backcountry creek.

“It’s an artificial environment and some people have this expectation that they can make it something other than what it is,” he says.

After publication of the Times article containing his controversial comment, McReynolds asked to be allowed to clarify his comments  for the web version of the story.

Daily Times Reporter, James Monteleone, who holds a Master’s Degree in Journalism from Northwestern University, said he stands behind his original reporting of McReynolds comments and the decision to allow McReynolds to amend his comments was made by management.

However, even McReynolds’ amended comments about the rock project leaves many baffled.

“Face it, the bottom line is he doesn’t know what he’s talking about,” says Aaron Carithers, 41, of Anazasi Anglers of Hesperus Co., a longtime, respected guide on the river. “If he did he wouldn’t be saying that.” 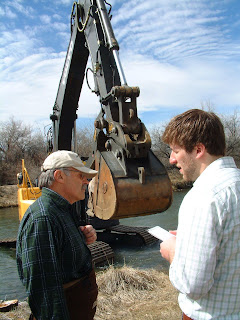 As far as the fishing on the San Juan is concerned, anglers couldn’t be happier, according to Wethington, who conducts regular streamside interviews with fishermen as part of his NMDGF duties.

The latest numbers show that close to 90 percent of anglers are either very satisfied or highly satisfied with their angling experience whether they’re fishing the river for the first time or have been for the last 25 years, he says.

Hansen’s response to the critics, of which the BLM has many due to its regulatory role over oil and gas drilling on public lands, is “show me the proof.”

“People can stand up and make all these accusations, but where’s the data?” he says.

McReynolds declined to personally respond to a request for explanation of his claim the river was worse off because of the rock projects but his handlers in Washington D.C. didn’t , stating McReynolds bases his opinion on frequent visits to the river and anecdotal evidence.

Many fly shop owners, river guides and anglers in the small community of Navajo Dam find McReynolds’ claim to be a frequent visitor ironic because none can recall having seen him on the river and they have been looking.

Nonetheless, Hansen says, the habitat improvement projects are based on widely accepted, scientifically proven and thoroughly established fishery management practices used all over the country.

The San Juan projects were also vetted by officials at the U.S. Fish and Wildlife Service, the Bureau of Reclamation, the Army Corp of Engineers, the state Department of Game and Fish, the state Environment Department and State Parks, he said.

“But no matter how hard you try, there’s always going to be some people you can’t satisfy,” he said.

Hansen noted that the total cost of all four phases of the habitat improvement projects cost an estimated $160,000 with about $75,000 coming out of government coffers including an estimated $16,000 in wildlife habitat stamp money collected from New Mexico fishing license holders who fish on BLM or Forest Service Lands.

The remaining project costs were absorbed by various contributors including a great deal of in kind contributions from the oil and gas industry including rock hauling and use of heavy equipment and manpower.

The San Juan Flyfishing Federation also made a financial contribution to the projects which Hansen estimated could have cost $500,000 to $600,000 if bought and paid for on the open market.

And now for some editorial analysis, commentary and background of the news:

Many in Navajo Dam fishing community suspect Trout Unlimited’s meddling in the affairs of the San Juan river are simply to further its political agenda against the oil and gas industry.

McReynolds shares office space in Albuquerque with the New Mexico Wildlife Federation and is frequently seen in the company of Oscar Simpson , a campaign coordinator with the federation who has in the past made questionable claims about conditions on the San Juan River to further his campaign against the oil and gas industry  see related story. 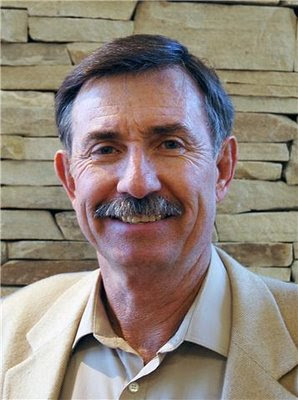 Photo courtesy of New Mexico Department of Game and Fish.

Many on the river suspect special interest groups such as Trout Unlimited and the New Mexico Wildlife Federation have no real interest in seeing habitat improvements made to the San Juan River as that would detract from their claim that the river is in decline and the oil and gas industry is at fault.

Many say the river has simply become a pawn and collateral damage in these groups’ campaign against the oil and gas industry and the fishing community is suffering business losses due to the negative and often erroneous publicity that is being generated  see related story.

One thing that’s clear from the latest controversy surrounding the river, it’s that Trout Unlimited’s credibility and clout within the San Juan fishing community has been severely eroded due its political rhetoric and activities, much like NM Wildlife Federation’s was before them.