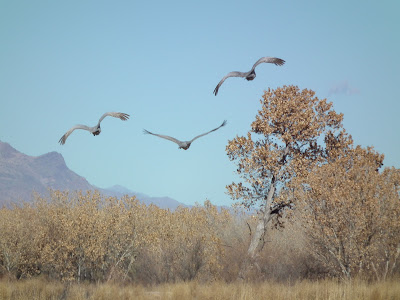 By Karl Moffatt
The massive flock of snow geese all took off at once, engulfing this lone visitor to the Bosque del Apache in a swirling mass of brilliant white and the din of heavy honking.

Within minutes the birds were all gone and the air became still again.

But then the clucking calls of a few cranes drifted across a nearby field and in a moment a trio of the gangly birds could be seen landing awkwardly to join others pecking on the ground.

This is a place where wildlife can be seen every day, especially in the winter when thousands of migrating geese, cranes and ducks make it their home.

The 57,000-acre wildlife refuge just south of Socorro is managed by the U.S. Fish and Wildlife Service to provide waterfowl with ample marshland and feed to sustain them over the winter. 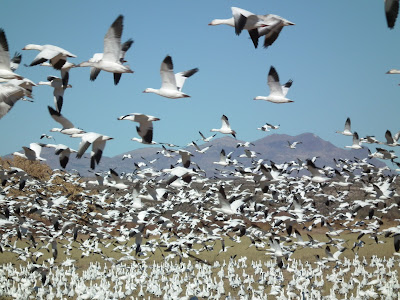 But the primary benefit to humans may be the endless display of wildlife that can be found here on any given day of the week.

For example during a recent visit the author had the chance to observe a coyote stalking a marshy area teeming with noisy ducks.

The coyote was watching from a ditch bank in an adjoining field and then slowly made its way through the water filled ditch and up and across the dirt road where unsuspecting spectators sat in parked cars quietly watching the ducks.

The wily coyote slinked between the cars and disappeared over the embankment, down into the brush from where it emerged again, belly dragging in the dirt as it slunk down low and crawled over to the edge of the flooded field.

The coyote was eyeing the ducks who had no idea of the danger lurking behind them as they bobbed up and down in the water.

Then the coyote leapt into the water and snatched one of the ducks with a violent shake of its head and the bird was instantly dead.

It was an impressive display of hunting prowess and gave one pause to consider the circle of life as the coyote strutted off down the road with its kill clenched in its mouth. 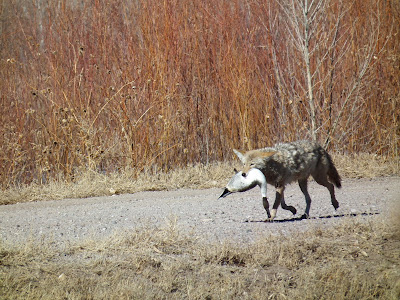 Meanwhile back in the field two other coyotes were making their way over to the pond where the ducks had resumed feeding without a care.
Moving on to other areas of the refuge along the 12-mile auto tour loop visitors will find elevated decks and blinds from which to view the birds, a boardwalk extending out into a marsh and trails to follow.

Mountain lion activity has been noted on the refuge and some areas and trails have been closed as a precaution. Pets are allowed on some areas of the refuge but must remain within a vehicle when on the auto tour loop.

A visitors’ center located across the road from the tour area houses a gift shop where books, posters, snacks and beverages can be found along with an interpretive display that illustrates some of the refuge’s history and other information.

Volunteers contribute greatly to the refuge’s operation and are on hand at the visitors’ center to assist the public.

Visitors to the refuge will find other areas of interest beyond the auto tour loop including a new overlook that provides an expansive view of the refuge and surrounding wilderness areas.

The overlook is located on Route 1 just south of the visitor center, past the canyon trailhead and just beyond the railroad trestle. 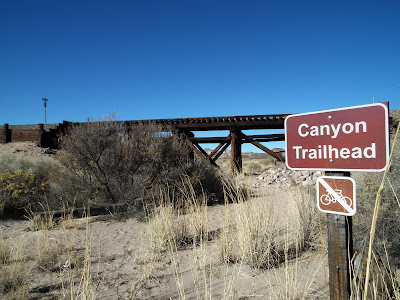 Those seeking to stretch their legs following the day of observing the birds from the confine of their cars will find numerous trails to hike including the Canyon Trail, a fairly easy, 2.2 mile roundtrip up a sandy wash to a hilltop offering excellent views, then on through an interesting side canyon and back again to the wash.

Like any high desert hike, plenty of water, a good hat and sturdy shoes are essential to enjoying the trip.

Hikers will also find the Chupadera Trail north of the visitors’ center off Route 1 provides a good three mile hike up to an overlook from where one can see more of the refuge and the surrounding countryside.

A visitor’s guide containing a rudimentary map of the refuges’ hiking trails can be obtained at the visitors’ center or from staff in the kiosk at the entrance to the auto tour loop. It costs $5 to take the tour.

And while the Bosque del Apache lends itself well to picnicking those who save their appetites will be delighted to find two of the best hamburger joints in the state, the Owl Bar and Café and the Buckhorn Tavern, in the nearby Village of San Antonio. 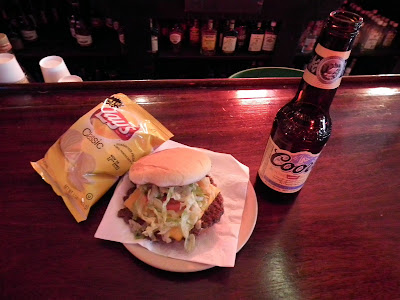 Both of these longtime establishments have been serving up cold beer and great, green chile cheeseburgers to road weary travelers of I-25 and NM 380 for decades and have achieved legendary status.

Posted under Uncategorized
Comments Off on Bosque del Apache: A Winter Festival of Wildlife