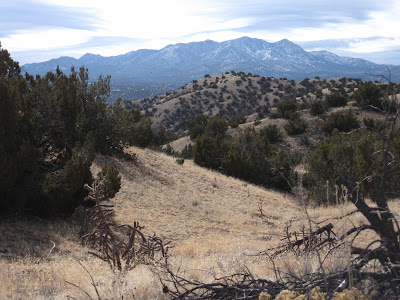 The coyotes started howling just as we crested the hill on this warm, sunny afternoon at the new south of .
But it was the panoramic views that captured our attention as the pack yipped and howled in what sounded like the next draw over.
Views that stretched for miles taking in snow capped mountain ranges, flat topped mesas and rolling pinon and juniper studded hills.
Here the ground was warm and dry, the trails clear and well maintained and the silence deafening.
“It’s one of the best things about this place,” says Sarah Wood, manager of the state’s newest park. “We’ve got five miles of good trails, great winter hiking and incredible views.”
Located just outside the historic mining town of Cerrillos, just 25 miles south of Santa Fe off State Rd. 14, management of the park was assumed from Santa Fe County by the State Parks Division of the state Energy, Mineral’s and Natural Resources Department in August.
Many of the state’s 36 state parks administer public lands for other agencies and generate much of their operating funds through user fees.
Much of Cerrillos Hills State Park’s existing trails, interpretive signs, a restroom and other features were already in place due primarily to the volunteer efforts of  the Cerrillos Hill’s Park Coalition along with assistance from the county and has been open to the public since 2003.
Granted some $1.4 million in legislative appropriations in recent years, State Parks acquired a .67 of an acre parcel of land in downtown Cerrillos for $672,000 upon which to construct a community and visitor center, according to Marti Niman, State Park’s spokesperson.
But plans for the community and visitor center have since ground to a halt after Governor Bill Richardson ordered a freeze on all capital outlay projects while he and the state legislature work on a fix for the state’s $650 million budget shortfall.
State Parks was however, able to renovate a house on the land for use as an office which sits just down the street from a historic landmark at the entrance to town, Mary’s Bar.
During a recent visit Wood said she hoped the park would draw more visitors to the old mining town and boost economic development for the rural area.
“We already get quite a few visitors,” she says “But we’re seeing even more mountain bikers, hikers and horseback riders as the word gets out.”
Wood noted that she spends a lot of time now notifying visitors that a $5 day use fee is required to utilize the park. It had been free to use before. A yearly pass can be for $40 at the office or by mail.
The park has recently played host to astronomy events, nature tours and other events to draw visitors and will conduct even more activities in the future, Wood said. 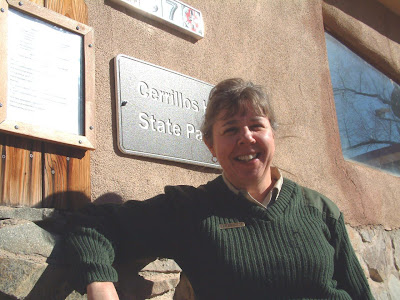 Wood formerly held the position of Northwest and Northeast Regional Educational Coordinator for State Parks where she oversaw educational and interpretive programs including star parties, wildlife tracking, plant and fauna identification and history programs for school groups and the public.
This is her first posting as a State Park Manager and is excited about the opportunity and possibilities considering the area’s natural and historical attractions and its proximity to a major tourism destination such as .
Less than a half hour away from Santa Fe, the park not only provides visitors with wide open spaces to enjoy but also a glimpse back in time of an era long ago.
Along many of the trails visitors will find numerous sealed mines, most with interpretive signs providing information about the region during its boom town days.
Cerrillos once was a town bustling with hotels, saloons and other businesses to support those who mined the hills during the 1800s for gold, silver, turquoise, zinc and  lead.
But today one finds mostly dusty streets, old boarded up store fronts and plenty of dogs roaming about the once busy town.
However, upon closer inspection visitors to Cerrillos will find some diehard businesses remain including the fun and informative, Casa Grande Petting Zoo and Turquoise Mining Museum, an intriquing What Not Shop and Mary’s Bar, a classic New Mexico drinking establishment.
The town also boasts a wonderful old church, some galleries and plenty of Old West atmosphere, the likes of which drew movie makers to the rural community to make films such as “Young Guns,”one and two.
All worth visiting while taking in the new state park’s great outdoor recreational opportunities which also includes a horseback riding concession, Broken Saddle Riding Co, that’ll take riders into the park and surrounding public lands.
It should be noted that Cerrillos lacks a restaurant but food and drink can be had in the funky little town of located just three miles down the road from Cerrillos, where one can eat, drink and shop.

This article also appeared in the Santa Fe New Mexican.

Those traveling out to can make a roundtrip adventure of it by taking I-25 south to exit 267 located at the top of La Bajada Hill, just past the rest area.
Go under the highway and then head straight for the mountains on Santa Fe County Road (SFCR) 57, also known as .
This paved road turns to dirt after about a mile and one might see the Roadrunner train along the way. About six miles later one comes upon the old railroad siding of Waldo where the ruins of massive coke furnaces can be seen by the railroad tracks. The stop features the shade of several aging cottonwood trees and ruins of old buildings. Amtrak and freight trains still operate on these tracks, trespassing is prohibited and caution is advised.
The road then cuts through a narrow, twisty gorge and eventually comes out at Cerrillos where one takes a left onto SFCR 59, which leads up past the village cemetery to the kiosk. The office is located in downtown Cerrillos on .
Upon leaving town, visitors can head back to through Cerrillos on State Road 14 and take SFCR 45, also known as , just outside of Lone Butte, for a scenic side trip into the foothills and past the movie ranch where from the road visitors can sometimes see movie sets. Stay on SFCR 45 to the frontage road at I-25 and follow it north back to State Road 14 and on into .
Posted under Uncategorized
Comments Off on Cerrillos Hills State’s Newest park