Fort Union on the old Santa Fe Trail: It’s How the West Was Won! 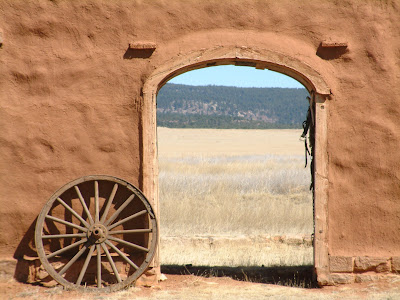 Rising above the grasslands like an adobe Stonehenge, the remaining chimneys and walls of old Fort Union still silently beckon travelers to this historic military outpost on the old Santa Fe Trail.

Once the primary military depot for U.S. Army soldiers serving to protect westward settlers and to suppress the Indians, it was the biggest military installation in the Southwest at the time.

The fort at one time featured one of the best hospitals in the West, an ammo depot, a military prison, warehouses, mechanics shop, corrals and troop quarters

It also served as a vital stopping point on the Santa Fe Trail for merchant’s wagon trains and other travelers seeking safe refuge from marauding Indians and welcome relief from the open road.

Today, upon leaving Interstate 25 to visit this old fort located on the historic Mora Land Grant, one will immediately come across remnants of the deep ruts left by the endless procession of wagon trains and others who settled the West back in the 1800s. 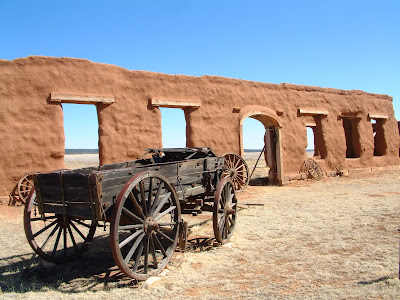 During the eight-mile trip to the fort one may come across of a herd of antelope grazing on the plains or see real cowboys working among cattle in the fields. A sea of grass extends for miles, flanked by pinon, juniper and ponderosa studded hills.

At the entrance to the old fort, visitors will find friendly and informative staff and plenty of history to absorb within its small but detailed museum.

But it is on the grounds of the fort itself that the place seems to come alive. One might even imagine hearing the creak and groan of wagon wheels, the crack of a whip or detect the musky odor of leather and horses upon the wind.

A walk of the grounds provides an excellent hike and plenty to learn from interpretive signs featuring photos from the period providing information about the ruins and what purpose they once served.

The fort played a pivotal role in New Mexico history as Union officers leading local, volunteer troops stationed at the fort marched out to meet an invading Confederate force and defeated them at the battle of Glorieta near Pecos during the Civil War.

Ironically, there were numerous, former, Union officers from the fort who had resigned their commissions and took up with the Confederates found among the invading, rebel forces, according to the national monument’s 1992 administrative history compiled by author Liping Zhu and available for review on the monument’s website at www.nps.gov.

And prior to the Civil War, soldiers from the fort conducted many of the campaigns against Indians in the area who were preying upon Western settlers. U.S. soldiers took on the Apaches and Utes first and then later turned to the plains Indians, the Kiowas and Comanches, in a relentless and brutal war against the native people.

In the end the Indians were routed from their territory and saw their primary food source, the buffalo, decimated by the onslaught of invading settlers and the soldiers who protected them.

Fort Union served as the U.S. Army’s primary supply depot for almost forty years, extending military might into the Southwest and supplying the great many smaller military outposts located throughout the region. 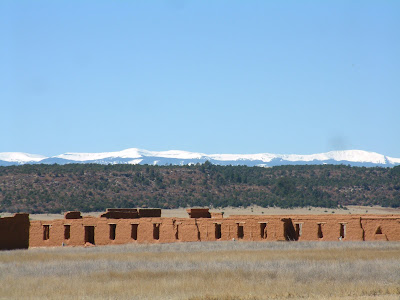 Hispanic land grant historians might look upon the fort as an affront as the land it was built upon belonged to the Mora Land Grant and was seized, occupied and then abandoned without any compensation provided to its Spanish owners.

Hiking the grounds of the fort, visitors will get a feel for the size and scope of the garrison upon seeing preserved adobe walls from which many of the buildings were constructed, the stone walkways and foundations laid out in military precision and the eerily intact brick chimneys and stone prison cells.

A visit to Fort Union is a real bargain for the cost conscious as the entrance fee is only three dollars, which entitles the bearer to also visit the Pecos National Monument for free upon presenting the same receipt or vice versa.

The Pecos National Historical Park features intriguing ruins of what was once a great Indian Pueblo and the remains of an imposing Spanish church. 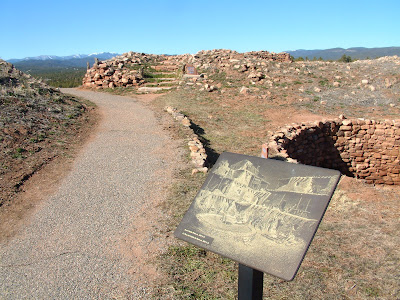 Located within the Pecos-area park visitor center is a comprehensive, concise and rapidly absorbed museum of early, regional history for this part of northern New Mexico.

Leashed dogs are allowed at both facilities.

If You Go:
Fort Union National Monument is located about 90 miles northeast of Santa Fe off I-25. Take exit 366 at St. Rd. 161 just after Watrous. Follow the signs. The Pecos National Historical Park is located about 25 miles northeast of Santa Fe just outside the village of Pecos on St. Rd. 63. Coming back from Fort Union get off at the Rowe, Pecos exit, # 307 and take St. Rd 63 about five miles to the park. Stopping at the park on the way to Fort Union get off I-25 at the Glorieta, Pecos exit, # 299 and take St. Rd. 50 into Pecos and then bear right at the intersection of St. Rd 63 for a short drive to the park. Follow the signs. For an interesting side trip stop in Las Vegas to see the old Harvey Hotel at the train station.
Posted under Uncategorized
Comments Off on Fort Union on the old Santa Fe Trail: It’s How the West Was Won!