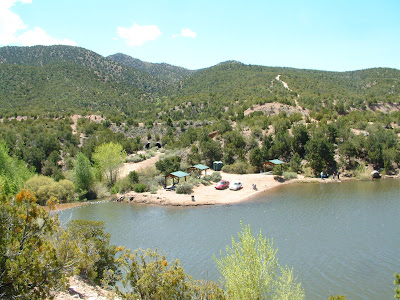 When the summer heat comes down on Santa Fe, there’s a great little spot this side of the Pecos where one can fish, picnic and play in the cool waters running under the shade of many a cottonwood tree.

Nambe Lake and Falls is just up the road from Santa Fe, a short 16-mile drive that takes one a world away from the heat, noise and congestion of the city.

The 56-acre lake is well stocked with trout and provides great fishing in the shadow of the Sangre de Cristo Mountains from which its lifeblood, the Rio Nambe, flows.

Located on scenic Nambe Pueblo’s lands, the lake and falls offers visitors a great place to wile away a day, wading in the cool waters of the river, basking in the soothing mist of the water fall or hiking streamside under the shade of its many cottonwood trees. 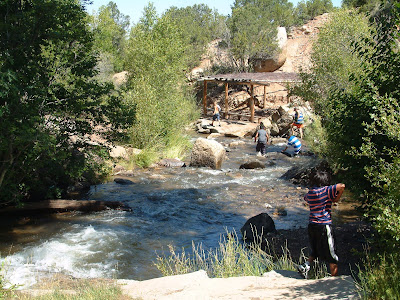 The falls area offers a plaza surrounded by adobe and viga picnic shelters, many shade trees and the river running through it.

The area is popular for family gatherings, reunions, graduation parties and other events.

In the same area but further downstream the falls area offers group and individual camp sites including some with water and electric for recreational vehicles, all under the shade of the many cottonwood trees.

Visitors here will find streamside trails that lead to the base of a waterfall fed by a continuous summertime flow from the dam above. A steeper hike along but above the stream will take one up almost parallel to the dam where yet another waterfall can be seen.

Behind the dam, anglers will find the lake chock full of trout and many coves and other good spots to fish from. From up here one can view the Jemez mountains off across the valley and watch as lazy, summer clouds float by. 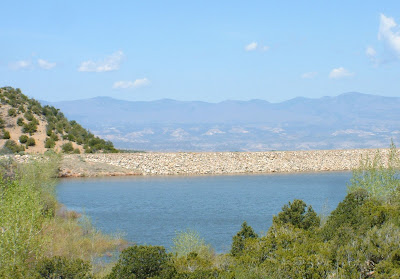 Nambe Chief Ranger Joe Vigil, 63, who was born and raised on Nambe Pueblo, says the lake’s primary attraction to many area anglers is its summer-long trout season.

Many competing tribal lakes at lower elevations stop stocking trout during the summer and turn to catfish because the trout won’t survive the heat.

But not at Nambe Lake and Falls. The trout here are stocked all season long, usually once a month with upwards of four to five thousand fish in sizes ranging from 10 to 15 inches, Vigil says. 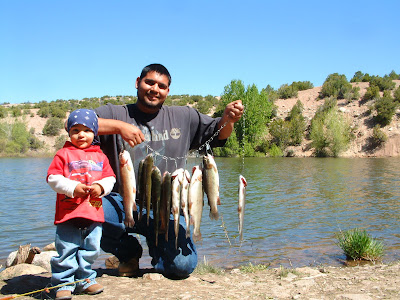 Miguel Espiricueta, 21, of Arroyo Seco and his son, Miguel Jr., 2.5, show off the hefty stringer of trout they caught using powerbait during a June 2010 outing to the well stocked, tribal lake.

Vigil, a retired sheriff’s investigator, says that growing up on the pueblo he used to hike and fish in the same mountains visitors can enjoy now and it remains relatively unchanged.

Back in the 1950s, when Vigil was growing up, the pueblo was much smaller in population and most families farmed and raised livestock.

The living was much simpler then for him and his four brothers and one sister.

Vigil attended grade school on the pueblo along with a handful of other kids and they spent most of their spare time playing marbles or baseball and riding horses. They also fished and played in the nearby woods where visitors can do the same today.

Vigil joined the Navy after graduating high school in 1965; enlisting was something many young men from the Pojoaque valley were doing then. There was war on in Vietnam and the draft loomed, so Vigil signed up and became a boiler tender on the destroyers, the Cromwell and the Norris. His Navy career was uneventful having spent most of his time stationed on the East Coast.

After his stint in the military he returned to New Mexico where he pursued a career in law enforcement, starting out in the village of Questa and then moving on to the Taos and Santa Fe Sheriff’s Departments in those counties before finally retiring from the Rio Arriba County Sheriff’s Department just a few years ago.

Vigil says he liked police work because every day was different and presented a new challenge.

Vigil says he took over managing the pueblo’s recreational area because he needed something to keep him busy in his retirement. He’s since found he now enjoys the more laid back nature of his work when compared with his previous career.

Vigil is married to Teresa and has been for over thirty years. The couple have two sons, Joey, a Tesuque Tribal Police officer and John, a state government employee in Santa Fe. Their daughter, Crystal, is a home healthcare worker who lives on the pueblo as does her brother, Joey.

Vigil says life on the pueblo has changed some over the years but visitors will still find the pueblo a sleepy little village, surrounded by farms and the mountains, all brimming with pastoral beauty. 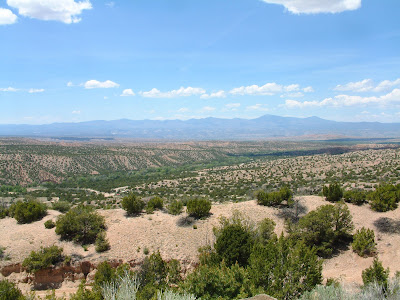 The valley through which the Rio Nambe flows and where Nambe Pueblo exists, as seen from the road leading to the lake.

“It’s quiet and cool up here and we make sure everybody’s happy and enjoying themselves,” Vigil says.

Rangers are on duty everyday during the summer season when the lake is open from 7 a.m. to 7 p.m.

A carload of up to five people can visit the falls for $10 for hiking, wading and picnicking. Photographers need to purchase an additional $5 license for the right to take pictures.

Anglers pay $15 for a day of fishing with a bag limit of up to five trout and no state fishing license is required. Seniors over 60 pay $10 while kids under the age of 12 pay $8 with a five fish bag limit. Kids six and under get in for free and can catch and keep two fish.

Boats with electric trolling motors are allowed as are float tubes and rafts. Swimming in the lake is not allowed.

Reservations of the falls area day use areas is negotiable. Call Vigil at 455- 2304 for more information.

Take US 84/285 north out of Santa Fe to State Road 503 just past Pojoaque. Take St. Rd. 503 to Nambe Pueblo Road 101 and follow to the Nambe Lake and Falls guard shack. Returning from the lake or falls one can visit the pueblo’s plaza by taking Nambe Pueblo 102 which winds its way back to St. Rd. 503 for the return trip to Santa Fe.