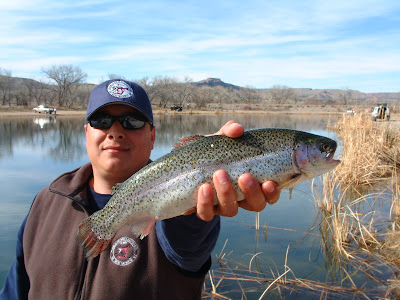 The coming of spring marks the beginning of the fishing season for many of northern New Mexico’s tribes who have heavily stocked their lakes to satisfy eager anglers.

“We’ve got loads of fish in there,” says San Ildefonso Pueblo Ranger, Dave Martinez, as he waved an arm at the tribe’s five-acre lake located west of Pojoaque just off the highway to Los Alamos. “And some big ones, too.”

Anglers have reported seeing a legendary trout reputed to be well over 22 inches cruising the lake and sporting a tag from last year’s fishing derby. The fish is worth $100 to the lucky angler who lands him and many have tried, Martinez said

“A lot of people swear they hooked him but then he got away,” Martinez says.

That fish is just one among over 5,000 trout stocked in recent weeks to satisfy anglers who pay $12 a day to catch and keep up to six fish. Kids under 12 fish for six bucks.

During a St. Paddy’s’ Day outing to the lake last week the weather was sunny and warm, the lake surface dimpled by rising trout and fellow anglers friendly and hospitable.

It proved to be an exciting afternoon for fishermen like Fred Vigil, 46, of Pojoaque, a school maintenance worker who bagged himself a 19-inch rainbow trout and was giddy with joy. 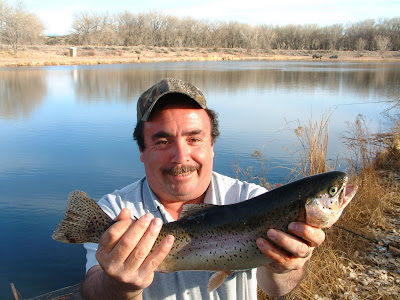 “Just look at him,” he said as he showed off the big fish and a danced a little jig.

Due to a supply of fresh river water and a set of aerators that pump oxygen into the water some of the pond’s trout can survive over the winter and grow to good size, Martinez said.

The pueblo doesn’t plan to host a fishing derby until the last week of April so anglers have plenty of time to get in on the great fishing action, Martinez noted.

The lake is open daily, well behaved, leashed dogs are welcome and the atmosphere at the pond amid the Bosque is informal and friendly.

Anglers looking to get up into a little higher country can expect to find good fishing at Nambe Lake and Falls when it opens on March 25, says Nambe Ranger, Joe Vigil. 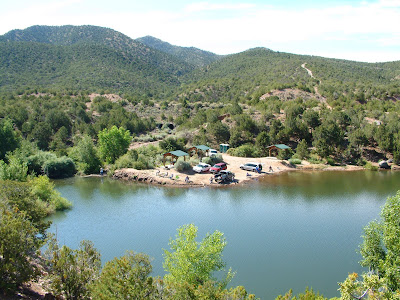 The tribe stocked the mountain lake with about 10,000 fish after it closed for the season last fall and just added another 6,000 in the last couple of weeks, Vigil says.

And anglers seeking a more urban experience can try their luck at Ohkay Owingeh Pueblo’s lakes located just north of Espanola where the a fishing derby is scheduled for opening day on April 10th, says Martin Monroe, Director of retail for the tribe’s Tsay Corp.

Monroe says the tribe will stock about 5,000 fish before the derby and feature cash prizes including $1,000 for the top fish. Cost to enter the derby is $25 at the gate on opening day or $20 up front beforehand at the tribes’ RV Mini-Mart located in the Conoco/Phillips gas station off Riverside Drive about a quarter mile north of the Wal-Mart on State Rd. 68.

After the derby fishing at the tribes’ lakes costs $8 a day with kids under 16 and seniors over 65 paying $5.